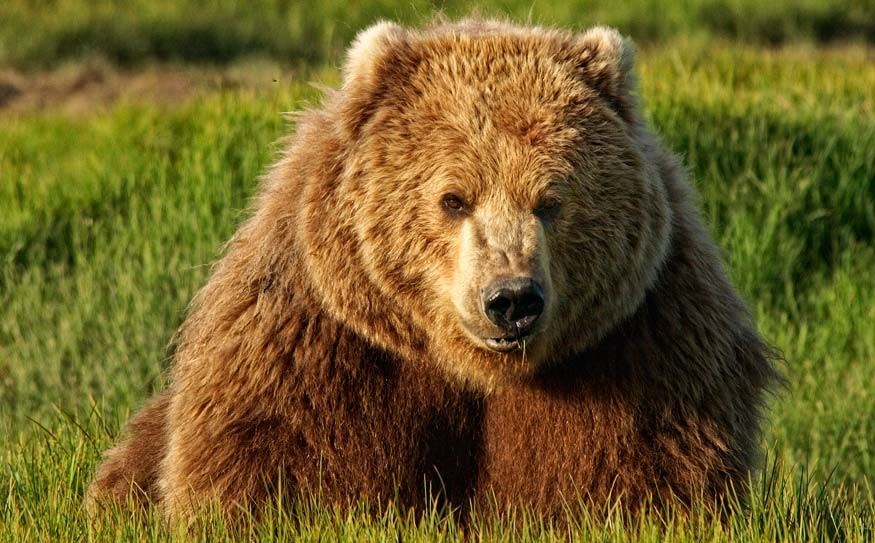 Encircled by seven massive brown bears, the group's anxiety is palpable. The question is where to point the camera? An 800-pound brown bear is 8 metres away and closing — a not uncommon occurence in Katmai. His curiosity captivates us; some hold their breath. The big bear stares intently into our eyes; we have a moment; he glides away. A deep collective breath is released and utter joy settles upon the group. Sublime.

The 2,000 to 3,000 coastal brown bears in Katmai provide endless hours of inspirational food for the soul and a never-ending source of photographic images. Nowhere else on earth do bears so graciously tolerate one another and extend that tolerance to us.

Katmai is the definition of remote, accessible only by plane and boat. There are no roads except the centuries-worn pathways trodden into the meadow by generation after generation of bears. Each trail links favorite feeding sites to day beds and forested cover.

It's an opportunity to spend time in the world of the bear, to regain our understanding of what's primal — food, mating and sleep. It's a primordial and magical adventure: to fully comprehend our complete and utter insignificance in the natural order, but at the same time, our inextricable connectedness to the web of life. In an instant.

With a backdrop of sweeping glacial valleys and craggy mountain peaks among the lush emerald forests, even photographers with only a point and shoot will have flash cards full of memories to take home. But it's the rich abundance of food that brings an unusually high density of bears to Hallo Bay: sedges, angelika, goose tongue, cow parsnip and lupine roots.

It's always best to pick a place in the meadow, park the group and let the bears come and go. Bear dynamics constantly change all around the group; activity erupts sporadically in all directions.

Scent is a powerful personal ad in the ursine world and especially in mating season. Urine trails and scat mark the female's trajectory. The male patrols the breeze for a hint of her receptiveness. Van, the king of the meadow, focuses his attention on the trail leading to the blonde female. He bites her neck, and Carol responds by rubbing her head on his shoulder. They engage in a short wrestle, but she's tired and gives him the cold shoulder. Van doesn't give up, feeding close by, biding his time, waiting her out. Eventually his persistence is rewarded: he mounts, and the two lock. The interaction lasts plenty long enough for our voyeuristic group to get plenty of photo evidence.

It isn't long before another big male, this one with only one ear and a scarred and slashed forehead, takes interest in Van's girlfriend. Van decides he's accomplished what he set out to do and moves on. Skelitor moves closer to our group, feeding in a zig-zag pattern. The group holds its position, keeping our movements to a minimum and remaining as predictable as possible. But Skelitor is intent on his path. We soon realize his motivation has nothing to do with us, but that he's following the scent trail and marks that Carol left behind. He slowly breathes in her scat scent, lips apart and mouth slightly open. He decides to move off and leave our group with our jaws agape and a thrilling tale to tell.

During mating season, from mid-May through mid-July, males dominate the meadow and strut about with a kind of cowboy swagger. The females are looking for the most physically imposing, dominant male to give their cubs the best chance possible. The males prefer to mate with as many females as possible to spread their DNA throughout the population.

Because males have been known to kill cubs to force a mother into estrus, moms with tiny cubs either stay out of the meadow or hang back and watch warily from the sidelines, reluctant to risk their family's safety. There is tension in the air — senses attuned to any intruder, especially dominant males that might threaten their cubs. Protective instincts run very strong, and even a small mother will take on the biggest male in the meadow in defense of her little ones.

Not every day in Katmai is suitable for bear viewing. One day we're weathered in, confined to the boat. As gales buffet our small ship, we play games, drink hot chocolate and swap bear tales. The wind and rain let up just long enough in the evening to go ashore and learn about the plant life; chew on some goose tongue and wild parsley; taste the kelp or as our guide Brad says, take our daily vitamin supplement. Much of the shore greenery is very rich in nutrients and vitamins. We even found some pumice from the 1912 cataclysmic event at Novarupta, one of the three greatest volcanic eruptions in recorded history. This prompts Brad to smugly bait our group with the question, "Can stones float?" Indeed, they can.

With the world's highest concentration of brown bears, a Katmai bear adventure is one of my top ten life experiences and truly a must for anyone's bucket list.

Sylvia Dolson is a hard-core ursophile, blossoming photographer and intrepid adventurer. By day, she is the executive director of the Get Bear Smart Society.

Fly to Anchorage, AK. Hop on a ferry or flight to Kodiak. The tour includes a float plane to the boat.