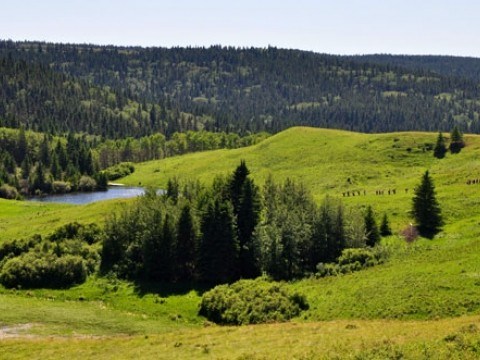 Anyone who contends that Canadian history is dull will likely experience a change of heart during a visit to Cypress Hills Interprovincial Park. Take a day to ramble along the Trans Canada Trail as it rolls past an oasis of lakes and forests spread high above the bald prairie. Soak up the landscape just as Native Americans and newly arrived European adventurers did in the late 19th century. The park straddling the Alberta-Saskatchewan border a four-hour drive southeast of Calgary  is the ideal place to take the true measure of the changes since then. To spend time there is to share in the Cypress Hills story - whether from the comfort of a bike seat or by simply placing your footsteps where the likes of Lakota Sioux spiritual leader Sitting Bull and the fledgling North-West Mounted Police once roamed.

During a recent sojourn in the park, Larry Emrick, a Vancouver-based member of the Mounted Forces Association of Canada, a commemorative group that honours the tradition of Canada's horseback constabulary, found himself exploring on foot rather than in the saddle.

"The Cypress Hills are stunning from all aspects," he told Pique . "It's awe-inspiring to be able to share a place where history was made. The older I get, the more I find that an enhanced sense of history comes with age - as does an appreciation for gentler hiking trails," the retired journalist said with a smile.

"Part of the magic is simply standing here, not reliving history so much as experiencing the same environment. I get as much kick out of looking south into the Sweetgrass Hills in Montana as I do at Fort Rodd Hill in Victoria staring across into the States at the Olympic Mountains. These were both bastions for establishing Canadian sovereignty."

The natural history of the Cypress Hills predates the settlement of the West by many millennia. Therein lies its charm. During the most recent ice age, these slopes - at 1,400 metres, the highest points of land between the Rockies and Labrador - were left untouched by glaciation. Although the surrounding prairie was levelled flat, Cypress Hills provided a refuge for an abundance of wildlife then, as it does today. The buffalo may have perished, but a wide mélange of species - from brown pelicans and badgers to burrowing owls and swift foxes - are often spotted while making your way quietly along a network of ridge trails. This being partly Alberta, don't be surprised to spot a herd of cattle grazing in the poplar-and-evergreen forests as well.

As hard as you try, what you won't find are cypress trees. The Blackfoot, one of the original tribes that hunted and over-wintered in the sheltering coulees, called this place the Pine Hills. French-speaking traders, the first non-Natives to explore the region, translated pine as "cypress." By the time a detachment of North-West Mounted Police arrived in the 1870s to clamp down on the cross-border smuggling of whiskey, the region was already notated on maps under its current handle.

If you're cocked, loaded and pointed straight at adventure, travel the back roads that link the park's headquarters at Elkwater Lake on the Alberta side with the Fort Walsh National Historic Site in nearby Saskatchewan's portion. Revel in the experience of being steeped in early Canadian history. Staff at the reconstructed fort go to considerable lengths to interest children in frontier lore. At the beginning of each guided tour, youngsters are recruited to join a special platoon of their own. Outfitted in NWMP uniforms and bearing wooden firearms, the kids are put through a series of drills before being reunited with their parents, some of whom they promptly arrest and arraign before a judge in a mock trial based on recorded events from the 1870s, when a village of 3,000 fur traders encircled the police stockade. No one leaves hungry. Smells of freshly baked bannock and cranberry loaf waft from a cook tent, ready to be washed down with a mug of cowboy coffee brewed up on a wood-fired stove or a glass of iced tea. In the time-honoured spirit of prairie hospitality, these goodies are on the house.

This has been an exceptionally wet spring on the prairies. As a result, expect fields to be lush with crops of green grain, yellow canola, mustard and red clover, as well as burgeoning saskatoon-berry bushes, whose tasty, purple-blue fruit rates high in antioxidants.

For visitors from the mountainous West Coast, a welcome novelty is to gaze across the outstretched landscape, riven by ancient glacial-melt channels, from atop the Cypress Hills meadowed grasslands. A constant breeze not only helps keep biting insects at bay but also fills the air with perfumed chords of richly scented wild roses and tiger lilies. There's no better place to appreciate life's rich pageant.

ACCESS: Cypress Hills Interprovincial Park lies 350-kilometres southeast of Calgary. For details, visit cypresshills.com. Accommodation in the park is mainly clustered around Elkwater Lake and ranges from a pleasing variety of public campgrounds to private lodges and guest ranches as well as bed-and-breakfasts. The park is open year-round and offers both downhill and cross-country skiing in winter. Information on Fort Walsh National Historic Site can be found at www.pc.gc.ca/lhn-nhs/sk/walsh/index.aspx. Creatively designed visitor centres at both Elkwater and Fort Walsh are must-sees.