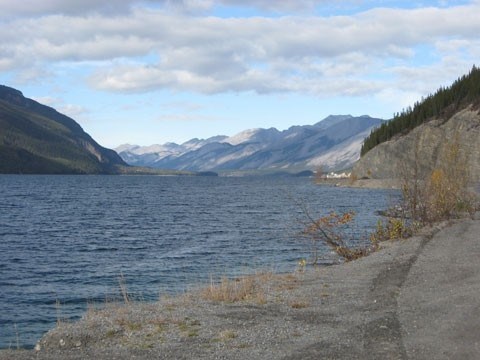 "Sorry, we have closed for the season to the general public. If you have an emergency, try the far west door or after 6 p.m. the new building to your right. p.s. Emergencys (sic) might include child birth, car accidents etc., not broken finger nails."

Reading the sign, hand written in felt marker on plastic-sheathed white paper fastened by scotch tape inside the window of the Continental Divide gas station/diner/restroom/souvenir shop, I laughed out loud and pulled out my camera. As I snapped the shot, the proprietor opened the door.

"I'm laughing at your sign," I said in greeting.

"That's good," he replied. "Not everyone has your sense of humour. Come on in."

The women's washroom was painted Bubblicious pink, the men's Crayola blue. On the wall a framed, hand-typed parable explained how from Canada, Heaven is a local phone call.

Minutes later I was again rolling along the Alaska Highway just beyond Kilometre 1118, three hours from Whitehorse, Yukon, instantly enveloped by exquisite wilderness and solitude. During the summer months, however, the Alaska Highway, beginning at Mile 0 at Dawson Creek, B.C., and ending at Delta Junction, Alaska (mile 1422/kilometre 2288), is well-travelled by RVers, family-filled minivans, open road-loving motorcyclists and steel-thighed cycle tourers.

Travelling the historic roadway in October, however, upped the adventure factor through the brilliant magic of late-autumn foliage combined with the potential challenges of early winter driving eagerly nipping at my wheels. A steady (1.5 cars/hour) procession of vehicles bearing Alaska plates headed south towing U-Hauls.

While I was fortunate to drive mostly dry roads under sunny skies long after the last mosquito had succumbed to frost, the 379-kilometre stretch between Fort St. John and Fort Nelson drove home the reason I'd switched to winter tires before setting out. It also drove home my growing love for the northern regions of our great country, as rolling farmland punctuated by grain elevators yielded to the deep Peace River valley and Taylor, scene of reality TV's Village on a Diet. With frosty drizzle falling from a silver sky, the bush-blanketed landscape undulated like gentle waves of gold, copper, bronze and rust bumping against pewter-toned rivers and sparkling gunmetal strips of pavement. Sloppy, slushy rain and fog soon enveloped burly semi cabs towing flatbeds laden with heavy machinery. This section is a working road, I decided, smothered by a now damp dust that turned snow patches brown and caked thick mud onto steel-toed boots, revealing a world where workers grow homesick while urban managers in southern office towers tally the profits in clean, pressed suits.

History, I decided, is born in the toughest places.

The engineering marvel of WWII was constructed in 1942 through some of the harshest unmapped country in North America to link Alaska with the Lower 48 states. The entire project, carried out by 10,607 soldiers, one third of whom were black men from the deep South unequipped to deal with cold temperatures working in segregated units and living in unheated tents, was completed in an astounding eight months and 12 days. ( www.juneteenthalaskaalcan.com ) It hurt to imagine how fatigued and forlorn they must have been in that pre-Facebook age. At the same time I appreciated my chosen route all the more, the way a tall ship is more compelling than a cruise liner.

Pulling into an all-purpose chicken fingers/hunting knives/fireworks/diesel/liquor stop I lined up for the single restroom behind a woman from Texas in the process of moving to Fairbanks. She'd been driving a week.

Two hours of wilderness later and running low on washer fluid, the Buffalo Inn appeared, the aroma of homemade chilli drawing me inside.

"You're a writer?" the server echoed my reply to her inquiry. From Prince Rupert, she'd returned to her good-paying northern job 12 days prior. "I should keep a journal," she said. "You should see the drama here."

Countless deer, moose, bear and coyote sightings later I reached Toad River Lodge, Mile 422, where my room, less than half the size of my Days Inn suite in Dawson Creek, was warmed quickly by the space heater as I enjoyed cable TV and an excellent Internet connection.

Admiring the 7,000-strong ball cap collection nailed to the dining room ceiling over my morning tea, I eavesdropped on a road crew transporting Fiddler on the Roof to Anchorage, one massively obese man describing how he witnessed rapes and even a murder as a child, punctuating every story with hearty laugh. Four young Gwich'in men on their way home to Fort McPherson towing trailers of heavy equipment bought at auction in Edmonton stopped in for breakfast to be served by a waitress from P.E.I.

Any Canadians uncertain of a true national identity, I concluded, should begin their search on the Alaska Highway.

To research your trip, the 900-page Milepost is the quintessential guide to the northern roads of Alberta, B.C. NWT, Yukon and Alaska ( http:milepost.com ) www.HelloBC.com < http://www.HelloBC.com >

A strangely quiet summer for the West Coast Trail
Oct 12, 2020 12:13 PM
Comments
We welcome your feedback and encourage you to share your thoughts. We ask that you be respectful of others and their points of view, refrain from personal attacks and stay on topic. To learn about our commenting policies and how we moderate, please read our Community Guidelines.