Walking amongst the gods atop a UNESCO World Heritage site
Nov 21, 2008 6:46 AM By: Alison Appelbe 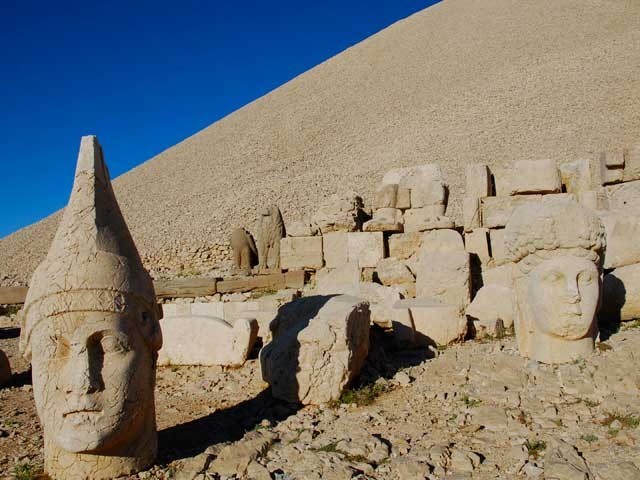 Figures of the Western Terrace

Some historians believe that King Antiochus I — who reigned over the peaceable if short-lived Kommagene kingdom in what is now southeastern Turkey in the 1 st century BC — was a man before his time.

They argue that in erecting statues of Greek gods and Persian ancestors on Mount Nemrut — a UNESCO World Heritage Site and important visual symbol for Turkey — Antiochus, with this mixed heritage, believed he was bringing together forces for good (that is the leading gods of his day).

Others say that in placing godly figures, along with several that depict himself, on the highest mountain in the region, then adding 50 metres of height to the mountain in the form of broken rocks, and finally ensuring that he’d be buried within this tumulus, Antiochus was elevating himself to the realm of divinity.

Whatever the truth, Mount Nemrut (Nemrut Dagi in Turkish, pronounced “nem-root dah-ah”) is one of the great antiquarian sites of Turkey, and the culmination of a two-week tour through Eastern Turkey with the English company Explore.

The coach tour — 16 of us, with a Turkish guide — began in Trabzond on the Black Sea, and continued to Mount Ararat and the ancient Armenian city of Ani. We passed through traditional Turkish countryside. Young men herded goats, while others manned regular military checkpoints along the highways.

In this Kurdish part of Turkey, an undercurrent of pro-Kurdish feeling — exacerbated by gun battles between Kurdish dissidents and Turkish soldiers along the border and in Iraq — is never far from anyone’s mind. Occasionally, embedded on a hillside, we’d see a patriotic message in giant lettering that would read — in Turkish and aimed at Kurds — something along the lines: “We do everything for our homeland.”

That said, we felt safe and welcome. We moseyed around the border town of Dogubeyazit, and stood awestruck in the courtyard of the Isak Pasha Palace, an abandoned 18 th -century luxury retreat, both in the shadow of Mt. Ararat. We boated to Akdamar Island on Lake Van, with its Armenian basilica, and spent several days in Mardin, a city of golden stone said to resemble Jerusalem. Finally, we headed north from Sanliurfa, reputed to be the birthplace of Abraham, to the Mount Nemrut region.

While the Mt. Nemrut statues and reliefs have survived two millennia of winter snows (the mountain is only accessible in summer) and innumerable earthquakes, they were unknown to the outside world until 1881. In that year a German engineer named Karl Sester, employed by the Ottoman government to build a road to the city of Diyarbakir, reported seeing “many magnificent statues on a peak in the Anti-Taurus Mountains.” The Prussian Royal Academy of Sciences in Berlin was informed, and sent a team to investigate. Plaster copies were made of the statues, then believed to have been the work of the Assyrians, and several reports published.

But it wasn’t until the 1950s, when the American School of Oriental Research took responsibility for the site, that it was determined that Nemrut Dagi had been part of the independent Kommagene kingdom. Its capital city of Arsameia was found close by. The Americans (with German expertise) also came to believe that the tombs of Antiochus and others lie within the 2,150-metre-high tumulus (though no-one knows for certain).

Motoring towards Nemrut Dagi National Park, we visited another tumulus, Karakus, built by another Kommagene king, Mithridates II. We walked over the humpback Cendere Bridge (albeit the work of 2 nd -century Romans), and gawked up at the ruins of a 13 th century fortress constructed on the site of a Kommagene castle.

At the ancient city of Arsameia, we climbed up to a glorious stone relief of Mithridates I (Antiochus’s father) shaking hands with Hercules. From the hilltop ruins we could look right over the vast Mesopotamian plain — a taste of what was to come.

Then on Mount Nemrut, we pulled into the Hotel Euphrat — budget accommodation that Lonely Planet rightly praises for its “stupendous views of the valleys.”

In a basic room (no hot water, but no-one cared), one of the inevitably male housekeeping staff had deftly turned down the orange-and-brown blankets to expose subtly embroidered cotton sheets. And the Euphrat served good food — grilled kebabs, of course, an interesting stew, and a plentiful breakfast of fresh garden produce, olives, home-made yogurt, and heaps of Turkish flat bread (to be drizzled with wild honey).

We’d need all the sustenance we could get because our mid-afternoon climb from the parking lot on Mount Nemrut to the site of the statues — a mere 600 metres, but on often steep and sometimes crumbling stone steps — was no walk in the park.

At the top of the path, and the base of the tumulus, the trail opens onto the Eastern Terrace. Here you find massive stone “bodies” from which the heads, roughly two metres high, have fallen to the ground. Neatly placed, left to right, they depict King Antiochus I, the goddess Fortuna, Zeus (oversize, given his importance), Apollo and Hercules. Despite the afternoon shadow and dim light — or perhaps because if it — they were stunning.

We continued around the tumulus to the Western Terrace, from which you look out over ribbons of lesser mountain ranges to the Euphrates River and northern Syria.

Here the same figures (though apparently by different sculptors) are scattered about, higgledy-piggledy, in an appealing manner. Here rises another Zeus, with a curly beard, and young Apollo. Fortuna seems to smile ever so slightly. This terrace includes Antiochus and innumerable stone reliefs of his Persian and Macedonian ancestors.

By late afternoon, a sinking sun cast ever-evolving hues of light on the weathered stones. The effect was dramatic; the photo taking was manic.

Despite the (not widely observed) prohibition on drink in this mostly Muslim country, we cracked open a few bottles of wine, and no one seemed to mind. We toasted the gods and above all their maker — in this case, King Antiochus I.

After sunset, we all — 300 or 400 visitors in all — negotiated our way down another rocky trail. Small flashlights helped; some of us went down in pairs. A myriad stars, even a crescent moon, filled a night sky that can only be described as an astronomer’s dream. Divine it was.