I am following the footsteps of a crusty, local woman while trying to take quick mental notes of my surroundings, for I will have to come this way again soon.
Dec 5, 2008 7:01 AM By: Alison Lapshinoff 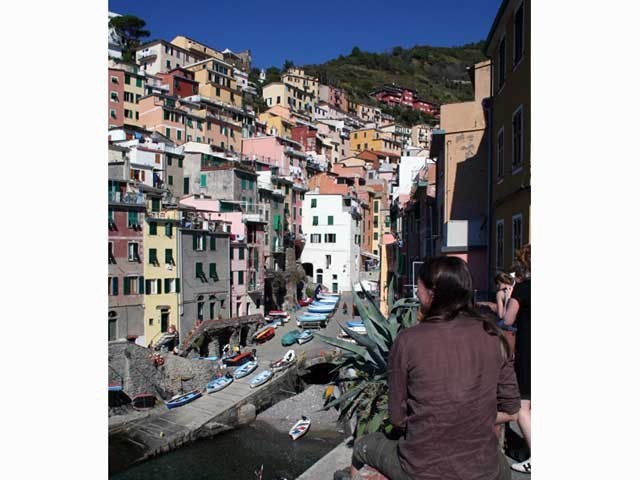 I am following the footsteps of a crusty, local woman while trying to take quick mental notes of my surroundings, for I will have to come this way again soon. Up a narrow stairway, right at the time worn door numbered 20, past the alley flapping with laundry and right again. Then more steps. Steep ones. The ancient stone buildings lean on each other for support as we navigate the maze they have created.

Presently we arrive at a door, not unlike the others we have passed on the way here, and the unnamed local produces a key. Gesturing for me to follow, I squeeze through. My backpack just fits.

She points up and we continue the climb, inside now. The lights are on a timer and I can hear its faint buzzing as it counts down to complete darkness as the walls are built solidly of thick stone, with no allowances for windows. Uno, due, tre, quattro, she counts the flights aloud in her native tongue as we climb, presumably to help me to remember how far to ascend when I return without her.

We reach a tiny landing and she fiddles with her keys. A door swings open to reveal a simple and sunny room whose most redeeming feature is doubtless its view. We make a trade; a considerable handful of euros in exchange for the key. Worn out already, I set my bag on the modest bed. I have reached my home for the next three nights in the Cinque Terra.

Italy crawls with tourists, but only a handful have discovered this unique stretch of coast on the Riviera. But this is enough to warrant UNESCO protection, national park status, and plenty of locals who have given up farming and fishing in favour of renting rooms. The Cinque Terra, literally meaning “five lands,” may have been saved in the nick of time from the overdevelopment that tends to follow the beaches of the Mediterranean.

Next day, armed with my Cinque Terra Card granting me permission to hike the coastal trail, I point myself northward and start walking. Five little villages cling to this precipitous stretch of coast, tumbling down the stepped hillsides of grapevines and olive groves, the area’s mainstay for centuries. My legs, weary from the previous day’s stair-climbing, are appreciative of the undemanding nature of this first stretch of hike, for the short, one kilometre stroll between the southernmost villages of Riomaggiore and Manarola is indeed quite civilized. The path, romantically dubbed Via dell’Amore, or “lover’s path,” paved and wide enough for a stroller, hugs the hillside high above the sea, and offers sweeping vistas of the scenic coastline. This part is easy. Seeing the rest requires lacing your boots!

Until as recently as the 1970s, the Cinque Terra was solidly off the tourist circuit. Wedged tightly between sea and mountain, it was not, until a short time ago, an easy place to reach. Hugging the northwest coast of Italy’s La Spezia province, the five villages of the Cinque Terra are unexpected splashes of colour along a 12-kilometre stretch of shoreline rising abruptly from the Mediterranean. One would not expect such inhospitable terrain to be developed, let alone farmed. Yet Italy’s hardy ancestral farmers have built solid walls of rock into the hillsides, thousands of them, seeing to it that every last slope has been stepped, to facilitate the cultivation of grapes and olives.

Limber now, having completed the easy stroll along the Via dell’Amore, I decide to poke around the next village before continuing my northward trek. Snugly nestled within two hillsides, bright with cheerful, boxy homes, Manarola invites exploration. A trail through the stepped vineyards circumnavigates the village, clearly illustrating its unlikely situation. The main street, onto which cars cannot impose, climbs ambitiously through its centre. Groups of laid-back, happy hikers pass as I relax trailside while enjoying a coffee and a locally baked vegetable pie, the early October sunshine warm on my face.

The local milk-run train that services the villages of the Cinque Terra is buried deep in the mountainside, allowing its passengers only rare glimpses of sun and sea. Peering down from my lofty viewpoint among the gnarled grapevines, I glimpse the rickety old beast as it exits one tunnel only to immediately disappear again, swallowed whole by the mountain. The train is, without question, the best way to access the Cinque Terra. Part of the region’s tranquil charm lies in the fact that cars cannot intrude upon the villages, creating a quiet and carefree pedestrian-only environment. However, removing the racket of motorcars that we have come to take for granted, is only part of what makes the Cinque Terra such an idyllic destination.

As I climb the 377 steps that ascend into Corniglia, the church bells are chiming, as they do in every town, on the hour, without fail. The ancient parish church of San Pietro, built in 1334, serenely commands respect while I confront the warren of narrow alleys that wind their way around the old town’s solid stone buildings. Some end abruptly at curiously situated doorsteps, presumably the entrance to a home. Others climb to lofty vantage points taking in the coastal trail in its entirety, and more still twist and turn past small shops displaying high grade olive oils in decorative bottles, mysterious dried herbs and spices tied in pretty little bags and, of course, wine! A simple tomato and bocconcini sandwich on fresh herbed foccacia and a slice of homemade fig and walnut pie provide a pleasingly authentic Italian lunch before rejoining the path to the next village.

The trail is of a more ambitious nature now, winding and rough, ascending and descending as the land commands. The late afternoon sun beats heavily on my back as I near Vernazza, whose approach may well be the most dramatic among these villages, inspiring slack-jawed amazement and a flurry of photography.

Tumbling haphazardly down the hillside onto a rocky promontory, colourful and lively Vernazza juts confidently into the Mediterranean, its medieval castle still diligently watching over things as it has since the 1500s, somberly scanning the sea for pirates. As I descend into town, a shiny white vessel is disgorging a boatload of smiling tourists in exchange for another and the waterfront beneath the castle is bustling with activity. A market has been set up along the busy pedestrian main street and my fellow parched hikers are flocking to umbrella-shaded patios offering cold beverages of all sorts. And at the sidelines, the last of the Cinque Terra’s diehard fishermen are mooring their boats and coming ashore. I try to imagine the changes that these old, salt-crusted seafarers must have experienced in this once remote place during its metamorphosis from a sleepy fishing village to a bustling tourist destination.

Perhaps, I muse, in the lazy afterglow of the day’s exertions, I will save the last leg of the hike for tomorrow. Monterosso still lay a good hour north, and there was certainly no need to strain myself, no pressing schedule to keep. Monterosso, being the largest and most accessible of the five villages, has a long sandy beach, a resort-like vibe and streets with cars on them. Lounging peacefully in Vernazza’s early evening hue, I didn’t feel ready to face an automobile quite yet.

Presently, the chiming of the church bells informs me that the next boat will arrive soon. Rising reluctantly from my sunny seaside roost, I decide I will embark, head back to Riomaggiore for the night, and take in the trail from the sea’s perspective. There is a stirring in the crowd as the sleek vessel comes into view and I reluctantly join the throng.

How many curious visitors can this tiny slice of the Italian Riviera sustain? I ponder, stepping off the boat onto Riommagiore’s busy shore. Many an unassuming little place has exchanged its long-established identity in return for the wealth that comes with being a popular tourist destination. I am winding my way uphill through the crowds, seeking the narrow opening between the buildings that leads up to my lofty room. Can a place like the Cinque Terra still retain its character with all these tourists tramping through?

So before you dash to the closet to pack your bag and lace your boots, rushing to catch the next La Spezia-bound train, consider this: Are you the sort who tends to wait for the elevator in favour of climbing the stairs? Does your preferred accommodation have valet parking and a string of stars attached? Do you prefer a rousing nightlife to a sweaty tramp through the bush? If so, then perhaps the Cinque Terra is not for you. The accommodation can be hit and miss, walking, the main mode of transport is almost always steep and late nights on the town are often sacrificed for early mornings on the trail. Perhaps, the Cinque Terra is better experienced from a glossy travel magazine in a familiar armchair with a beverage in front of a fire, enjoyed in comfort from afar. Maybe, just maybe, dare I suggest, you shouldn’t go at all!