The bowels of the earth beneath Yellowstone National Park churn with heat and pressure, the result of an ancient volcano
Jul 2, 2010 9:05 AM By: Alison Lapshinoff 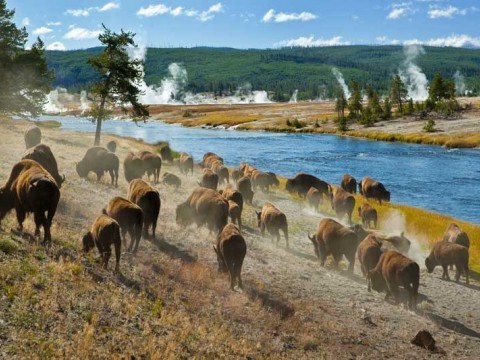 The tree's meager branches did little to fend off the sheeting rain. Above, dark thunderheads clapped ominously while here on earth the Black Growler steamed and hissed, angrily sending plumes of steam across the sodden trail, obscuring my view of the shimmering pools below. Boardwalks traversed the steaming soil and passed gurgling geysers that displayed nature's rare ability to boil water in the bowels of the earth before shooting skyward in impressive displays of her waterworks. We had missed Old Faithful by mere minutes and now the torrential rain kept us huddled beneath the trees in a waiting game with nature that we were sure to lose.

The northwest corner of Wyoming must certainly be one of the most unusual landscapes on earth. Natives have called the area home for over 11, 000 years, utilizing the land for hunting and transport. When the white man first set eyes upon the unlikely steaming landscape, he recognized that its fragile features must be protected from his people. Yellowstone was declared a national park in 1872, the first in the United States and perhaps even the world.

Half the world's hydrothermal features can be found in Yellowstone National Park. Over 10,000 hot springs, geysers, fumaroles and mudpots are the result of an ancient volcano that erupted 600,000 years ago. Protecting the park's unique landscape was, in those days, no small feat. In the first decade of its existence, inexperienced civilian superintendents were no match for the poachers, souvenir hunters and developers that raided the area. Tourist camps were set up at the many springs, the pools used for bathing and laundry. Debris plugged the geysers, arresting their impressive, watery displays. Drastic measures were clearly required and in 1886 the government called upon the army for help protecting the nation's first national park.

There are four types of thermal features in Yellowstone:

Hot springs, the quiet pools that shimmer invitingly are created by rainwater that seeps through the earth to finally reach the magma chamber nearly 10,000 feet below. There it is heated to over 400 degrees Fahrenheit, remaining liquid only due to the immense pressure created by the earth pressing down upon it. The super hot water, being less dense and lighter, begins its journey back to the surface, absorbing silica, the mineral used to make glass, on the way. Released from the bowels of the earth slowly and steadily, a hot spring is born, the water depositing silica around the pool forming a rock called sinter, and thus creating geyser cones.

Geysers' interior waterworks are constricted due to a build up of silica beneath the earth's surface. Pressure builds as the hot water strains to pass through, finally resulting in a dramatic natural fountain, the water spewing from the earth up to a maximum known height of 400 feet! Old Faithful, one such feature, is famous for its predictable eruptions. Roughly every 94 minutes this oddly reliable geyser erupts dramatically for up to five minutes, shooting up to 84 gallons of hot water to an average height of 130 feet.

The aforementioned and aptly named Black Growler is a fumarole, or steam vent. Super hot, the water in these features boils away before it reaches the earth's surface. The result is an angrily steaming, hissing, and yes, even growling black hole that emits hot steam in an unlikely earthen teakettle.

Finally, mudpots are created when water is limited and sulphuric acid dissolves rock into silica and clay resulting in a gurgling pot of boiling mud.

The military presence required to protect the churning ancient volcanic landscape that is Yellowstone National Park lasted for 30 years and in 1890 a permanent post was built at Mammoth Hot Springs in the park's northwest corner. By 1910, 324 soldiers, as well as some families and civilian employees were stationed at Fort Yellowstone and various outposts throughout the park, protecting its fascinating thermal features from exploitation.

Presently, we abandoned the tree under which we had been cowering and made a beeline through the sheeting rain to our car. Nature had won and we had no umbrella. As we headed for Mammoth, plumes of steam rose from the earth to be swept away in the wind and roadside geysers emitted their showy fountains. In other spots, hot pools quietly shimmered with hues of emerald green and bright orange, colours created by heat-loving organisms called thermophiles.

In the sagebrush-clad valleys, herds of bison roamed, their massive shaggy heads bent to the ground in a perpetual search for food. The hillsides were thick with immature stands of pine growing beneath the blackened corpses of mature trees, suggesting a fire had swept through some time ago.

Turns out that the fires of 1988 were the most devastating the park had ever seen, destroying 36 per cent of the park's 3,472 square miles. Following a 15-year natural fire policy during which natural fires were allowed to burn, in late July of 1988 the decision was made to suppress the flames. But it was to no avail. By Aug. 20 high winds fueled the flames to engulf 150,000 acres of forest. Twenty-five-thousand firefighters as well as military recruits battled the blaze. Roads and facilities were closed. Residents of surrounding towns feared for their property and their lives.

Many of the trees in the park are adapted to fire. Encompassing about 80 per cent of the forest, lodgepole pines have cones that are sealed by a resin that can only be cracked by the high heat of fire, thus releasing the seeds within. Many seeds were released that year and from the ashes rose a new forest of naturally seeded, densely packed baby pine trees.

Mammoth Hot Springs is located at the park's northern entrance. Here, where water once flowed, white staircases of travertine created by deposits of calcium carbonate terrace the hillsides in a ghostly grave of hot springs past. Where hot water still passes, the terraces shimmer with hues of orange blue and green, an unlikely landscape of heat, water and minerals.

Much like the terraces, Yellowstone's churning mudpots, growling fumaroles, showy geysers and fire-ravaged hillsides are merely a page in the park's continuing history. It is a vast and ancient volcanic landscape that is constantly changing with time.

Visitors aren't welcome during COVID on Haida Gwaii, at Tahltan Nation
Jul 31, 2020 8:44 AM
Comments
We welcome your feedback and encourage you to share your thoughts. We ask that you be respectful of others and their points of view, refrain from personal attacks and stay on topic. To learn about our commenting policies and how we moderate, please read our Community Guidelines.