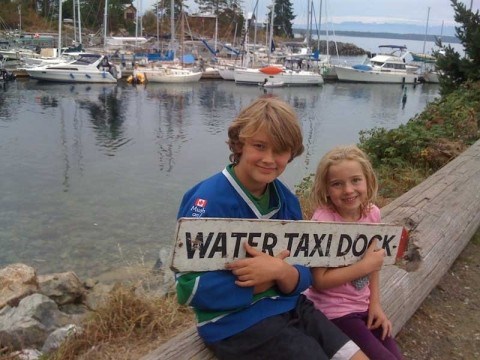 Some places are best described by what they lack. Savary Island - sometimes termed "Slavery Island" by people preparing for a vacation there - lacks a great deal. Paved roads, electricity, ferry service, sewers, abundant drinking water, big grocery stores, liquor stores, pharmacy, souvenir shops and garbage service are some of the amenities missing from the island's inventory of assets.

It's complicated and expensive to take a vehicle across to Savary, so most people don't bother, relying instead on the few crew-cabs and station wagons that make up the island's taxi fleet. Cell reception can be spotty (at least with Rogers), wireless Internet service is cabin-by-cabin, most places to stay are without TV or phones, and there's nowhere to pick up a newspaper.

Getting to Savary is no simple click of the heels either. Travellers must take two ferries and a water-taxi, schlepping all provisions (don't forget sheets and pillow cases) in blue Rubbermaid bins. The logistics of the journey aren't exactly your non-stop Puerto Vallarta all-inclusive. In fact, tourism-wise, Savary is to, say, Salt Spring Island what Nicaragua is to Mexico.

But perhaps it's the "bad" that makes Savary so good. There are many who have fallen in love with this crooked smile-shaped piece of heaven plunked into the Strait of Georgia, across the water from Lund on the Sunshine Coast. They don't mind the inconveniences; in fact, they say it keeps the hordes away and helps preserve the island's simple tranquility. These are the people who know Savary by its other nicknames: "Island Paradise" and "Hawaii of the North." Many of them are Sea to Sky residents who can't resist the siren call that lures them from the mountains to a place where the sun almost always shines, where island breezes kiss exquisite beaches and where the pace of life slows with the flows of the tide.

Savary Island has a laid-back nature and beauty that Whistler and Pemberton residents in particular seem to relish; in fact, some afternoons at the Government Wharf it seems you can't swing a piece of bull kelp without hitting someone you recognize from Nesters. This is a place where exceptionally warm, emerald-coloured waters lap creamy-white sand. At low tide the beaches poach nearly a kilometre of the ocean in places; tidal pools expose clam beds, jellyfish, starfish, crabs and more. Between the island's sandy shores, trails wind through dense forests of fern and cedar, past wildflower fields and fragile sand dunes. Less than eight kilometres long and one kilometre across at its widest point, Savary is small enough to explore on bike or foot, cozy enough to get to know the family in the cabin down the lane, yet big enough to find privacy and solitude.

"It's got its own rhythms here," says Mt. Currie's Leslie Young, a yoga teacher and massage therapist who started coming to Savary 15 years ago. "The best things happen when you yield to that rhythm." When she isn't leading a small group of holidayers through sun salutations on someone's deck or massaging a kayaker's tender shoulders, she lets nature set the pace. Young says she bases her day and her activities on the tides (for when to set the prawn traps, go crabbing), the moon (for full-moon skim-boarding), the time of year (long weekends can be "crazy," especially on South Beach) and the weather (drizzly days are perfect for hiking and biking). She is currently building a small cabin on Savary, a slow process that requires every piece of wood, every nail and every shingle to be brought to the island by boat or barge.

Carpenter Pascal Simon lives in Whistler in the winter, but heads to Savary every spring where he runs a small campground. What is it about Savary that draws him in? "The beach. The quiet. The peacefulness. And it's sunny there most of the time," explains Simon. He says it's inevitable that Savary will change as more people discover its beauty, but he doesn't really mind. "Sure, I would be happy if it stayed the way it is. But that's the nature of progress," he says, noting that since he first came to Savary in 1983, he has seen many cabins built, but there still isn't much in the way of commercial facilities.

Bev Nolan lives in the Pemberton Meadows. She and her family rent a small cabin on Savary every summer where they "swim for hours without going hypothermic, ride bikes everywhere and hang out on the beach." The fact that she spends two weeks without getting into a vehicle is one of Savary's greatest attractions. "It's peaceful and it's free. It's the kind of place where you've got to love being self-sufficient." Nolan believes that the lack of services and the logistical difficulties of getting to Savary are part of what make it - and keep it - special. "It's not for everybody," she says. "Some people get claustrophobic. Some people get bored. Personally, I love plunking my blanket down on a beach that's practically empty and leaving it there and knowing it'll be there the next day. And the next day."

Although the summer population swells to over 2,000 people, there are only approximately 100 permanent residents of Savary Island. Michele Bush may not be officially considered one of the hundred, but it seems part of her heart resides there year-round. "Savary is an obsession with me," says Bush, a Whistler writer and actor who owns Suite and Savary Inn together with partner John Oliver. "It's like half my brain is on that island in the middle of winter. Of course the draw is about the sand, sun and the energy of the place. But it's not an easy place to get to or to live. It's all about back to basics, hauling food, water and gas - wearing the same clothes you went to bed in, getting dirty... and I love it."

The lack of easy access and basic services may prevent masses of people from descending upon the island and changing its rustic nature. But for those who consider Savary Island their own private getaway, that's just the way they like it.