Travel: Stretching out my skin suit 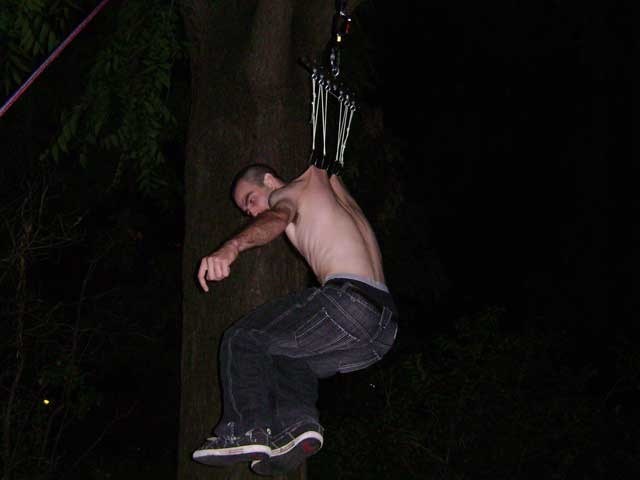 Tyler has a last name — but that’s not for your files. Rather, you will know him as the Metal Golem, breather of fire and splitter of tongues, stabber of septums and sternums, lancer of lips and lobes, defiler of dicks and clits. Quite the lad, him.

He has a lair, as befits someone with such a profile. On the surface, it looks like a regular old house in Oakville, Ontario. There’s a sink and a coffee table, cupboards and couches. There’s even a kitten. But look a little deeper, and the evidence starts to pile up. Look at that unicycle, that book about Fakir Musafar. And check out the bathroom: There’s a sign above the toilet informing all defecators that they must close the lid before flushing, lest a legion of poo particles blast skyward and settle throughout the bristles of his toothbrush. Lair, indeed.

And now look at the Golem. Head shorn. Ears scalpelled and elongated. Tattoo of exposed muscle on his neck. Forked tongue. Hoodie. Pants.

Yes, the Golem is a tweaker of the strangest realm. You know that dude who had himself tattooed all blue in the pattern of a puzzle? His name’s Enigma. Golem toured North America with that guy and did some weird stuff — just a little human pincushion, just a little jumping into piles of broken glass. Maybe a coffee, probably black.

I could diminish Golem a little bit if I felt like it. Like, when we first met about seven years ago, he slept on my floor, the cheap dirtbag. But even supernatural creatures sometimes have it hard, and it’s impolite to jest.

Besides, I’m not here for that. I’m here to have four hooks pierced through the flesh of my back, the better to be hoisted off my feet and dangle from some rig that incorporates the limb of a tree in Golem’s backyard. Talk about entrepreneurial spirit, eh? Some people open coffee shops; Golem hangs them from hooks. You can’t diminish that.

A thing like that typically begets two questions. There’s a how, for sure, but, first up, there’s a why. Better let Golem explain.

“My interest in suspension initially was purely for reaching a new level of personal awareness,” declares Golem as onlookers run screaming to the comfort of their morning jogs. “Later on, I did a few suspensions in a performance setting. Though after doing these I always felt dirty, as in doing a suspension for the public eye and awe of it was taking away from the true meaning of suspension.”

“I just felt there was something else out there. Something that would fill what I felt I was missing. I read into suspensions and found the spiritual reasoning of why people were doing it and really wanted to experience it. The moment I went up, I knew this would be for life.”

Nice people share, and Golem is no different. Also, it’s not like Golem discovered the whole thing. Worshippers of Siva do it, and O-Kee-Pa natives dug the dangle, too.

And now the how. I lie on a towel spread across Golem’s floor. He dons some surgical whatnots, like gloves and a mask. The hooks are autoclaved and packaged the way some guy cognizant of roving poo particles would have it done. He starts pinching the skin over my shoulder blades, little tugs here and there. Out with the pen and he makes a few guidelines.

Now the hooks. I’ve done this before, years back, but it’s still pretty scary. Like, they’re hooks, you know. Pretty big, too. Channelling Siva, I concentrate while he shoves them through his targets.

My skin suit now equipped, we head to the backyard, where he sets up the rig, which is basically a little girder connected first to the hooks and second to a rope slung over a tree branch. That rope makes its way through a belay system in a harness Golem wears. I’d like to say it’s part of his anatomy, but I’m pretty sure it’s store bought.

Before long, I’m off the ground and making some twisted facial expressions as my skin stretches in surreal courtship with gravity, just one faint trickle of blood. At first, it hurts. Not a lot, but more than a bit. Actually, last time it hurt so bad my brain compensated with an orgasm of endorphins, and I passed out in fairly short order. Not so this episode.

I’m all giggles up here, all captain charades on these hooks. Hey, look, I’m riding an invisible bicycle and my bell goes ding, ding, ding, just some hooks in my back, that’s all. Hey, look, there’s a ninja over there and I need to dropkick him, better push me into the tree so I can vault off the trunk, take that punk. Hey, look, I almost forgot about my cardio, better go for a jog, but first I’m Jesus Christ sans cross, and now spin me so fast my world condenses to one static dot on the lawn, everything else swirling by and I don’t even feel like puking. It gets lame for a second when I pretend to be a rollerblader, but, other than that, half an hour goes by pure fun.

Life immediately afterwards is a little uncomfortable because there’s enough air in your back to inflate a mattress. But that’s minor. Reap the rewards, for they are plentiful. Perhaps unsurprisingly, I experience nothing in the way of spiritual revelation. Rather, my package includes enhanced agility and heightened assessment. It also lends a feeling of invincibility, something I’m tempted to employ in a bank robbery.

Golem will hurt you like this. He’s a true friend in that respect, even if you’re a stranger. You can go to his website — themetalgolem.com — and book an appointment, or you can take the train to Oakville and wander around until he finds you, as Golems are wont to do. He’s a pretty friendly dude, which is nice given the situation. Just don’t soil his toothbrush.

Feds extend COVID-19 isolation order for anyone entering Canada until Aug. 31
Jul 7, 2020 2:22 PM
Comments
We welcome your feedback and encourage you to share your thoughts. We ask that you be respectful of others and their points of view, refrain from personal attacks and stay on topic. To learn about our commenting policies and how we moderate, please read our Community Guidelines.