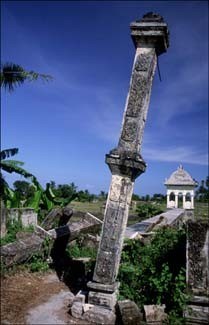 UJUNG, Bali–If you were a king in a land eight degrees south of the equator, where the humidity is high and the average daily temperature is always a little above 30 degrees Celsius, you’d be looking for ways to stay cool. And, being a king, you’d be able to think on a rather grander scale than paper fans. You might, for example, decide to build a water palace.

The last king of Karangasem, in eastern Bali, built three. The smallest is in ruins and hard to reach. The middle-sized one, Taman Tirta Gangga, has been turned into a bit of a Balinese Disneyland. The largest, Taman Ujung, is in ruins, but easy to get to. Although it’s just five kilometres south of Amlapura, east Bali’s main town, it gets very few visitors, so on this island with a population density of about 800 people per square kilometre you’re likely to have the place almost to yourself.

King Anak Agung Anglurah, the last king of Karangasem, finished building Taman Ujung in 1921. Just outside of the fishing village of Ujung, it covered an impressive 2,353 hectares. It was a royal residence, set in a landscape of fountains, canals, gardens and pools where princes and princesses might refresh themselves in the heat of the day.

There were pavilions, raised walkways, lots of statues and massive urns. The main pool was two hectares wide. Everything was elaborately decorated. The central palace, appearing to float above the shimmering water, was either "a mini-Taj Mahal" or a "rather chubby Dutch bungalow," depending on whose account you read. Alas, you can’t decide for yourself because the whole wonderful concoction came tumbling down – some of it during a volcanic eruption in 1963, the rest in a major earthquake 16 years later.

Today you’ll have to use a bit of imagination as you walk through the sun-beaten ruins. Approach these through the seaward-side gate. Make your way along a broad avenue lined by frangipani and mango trees. Cut across the dry field once filled with water and stop at the workers’ hut, where plans for the site’s restoration are tacked up on the walls. If you’re lucky you may see half-a-dozen labourers about – at the rate the work is going it will be the 22nd century before it’s done.

Cross a repaired causeway to the jumbled ruins of the main palace. Sculpture and masonry lie, half-hidden by foliage, where they fell. If you didn’t know better, you’d think the wreckage was a thousand years old. Picture how it once was, its columns and archways intact, the tropical air sweetened with the sound of splashing water and the perfume of flowers.

You could, if you wanted, dream of yourself at play in the pools, or you could go to Taman Tirta Gangga, about eight kilometres northwest of Amlapura. The king liked his Ujung water palace so much he built this one in 1947. It, too, was damaged by the volcano and earthquake, but not as badly as Taman Ujung. It’s been fixed up and, for a price, you can swim like royalty in its pools.

For information on travel in Bali visit the Bali Government Tourism Office website at www.balitourismauthority.net.

For information on travel in Indonesia visit the Tourism Indonesia website at www.tourismindonesia.com.