Travel: The canals of Amsterdam

Water flows through the arteries of this historic trading city
Sep 3, 2010 10:02 AM By: Alison Appelbe 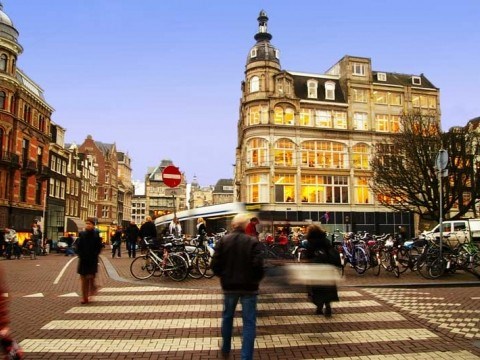 I've stayed in two Amsterdam hotels located on the Singel Canal. The Hotel Estherea is a gorgeous assembly of canal houses on an old-world theme. And while I reveled in its interiors, I loved the nighttime outlook. With the canal bridges outlined in tiny lights and the cobble lanes lit by standing lamps, the watery setting was stunning.

A few doors down huddles the budget Hotel Hoksbergen. And while my first-floor room was small (to put it nicely), from the bed I could look directly out on a Singel Canal on which, in late autumn, the municipal boats were scooping up the fallen leaves.

All of which reminds me that Amsterdam has a lot going for it, but central to its charm is its canals ( grachten in Dutch ) - 165 in total, covering 755 kilometres.

In Medieval times, Amsterdam began as a marshy polder in which houses on piles lined narrow waterways used for trade. Today those early canals, built in the 14 th century, are mainly in the Oude Zijde (old side), off the Amstel River.

Among that area's attractions are its narrow alleys lined with the city's original bars and cafes, the Oude Kerk (old church) and several Jewish synagogues and museums, the Rembrandthuis museum and the Red Light District.

But the more glorious Amsterdam canals were built in the 17 th century, or Golden Age, when the Oude and Nieuwe sides expanded outward to accommodate the docks and warehouses required to house and service what had become a world-wide trading empire.

What is referred to as the "17 th century canal ring," or Western and Southern (or Eastern) canal belts, are four concentric canals - the Singel (closest to the Oude Zijde), the Herengracht (gentlemen's canal), the Keisersgracht and the Prinsengracht (in that order) - that appear not unlike a half-moon, or cluster of stringed pearls.

Last August, UNESCO added this canal ring to its World Heritage List, citing its importance as an icon of large-scale urban planning, and its exceptional architecture, particularly the unique and beautifully restored gable-style canal houses.

Happily for visitors, this is a pedestrian (or cycling) paradise. Canal-side lanes are so narrow that small cars and delivery vans venture gingerly. Streets that cross the canals, particularly the major Leidsestraat, support cars, bikes, trams and people in no particular order of importance - meaning that every type of propulsion must co-exist, and they do.

(In some areas, different types of paved surface, including fitted stones of various shapes or sizes, are the only indication that a road use has sifted from, for example, bike lane to tram track.)

The western end of the canal belt embraces the ultra-desirable Jordaan district. Founded as a haven for Huguenot refugees, this crowded area remains neighbourly and funky, filled with popular bars and eateries, independent retailers and artist workshops.

In the Jordaan, you will find the Westerkerk (western church), with the tallest tower in the city, and a cavernous if lovely interior that speaks to The Netherlands' hard-won Protestantism and no-nonsense values. When Rembrandt died in 1669 he was too poor to merit a grave, but a plaque in the church notes that he was buried somewhere in its interior as, it is believed, was his young son Titus.

Next to the Westerkerk stands the Anne Frank house, were the Jewish girl and her family was hidden in the 1940s. When I visited this canal house years ago, it was still just that - a tall, narrow building with a bookcase that camouflaged the rooms in which the family was confined. But with the widespread dissemination of Anne's diaries, the destination became increasingly popular and a modern ticket office and lobby area was added. A million people now visit annually and lineups are a year-round reality.

Also on the Prinsengracht is the Houseboat Museum (Woonbootmuseum), a traditional Dutch working barge turned house that reveals what it's like to live permanently on the water. There's also the Bijbels Museum (Bible museum), located in two tall, handsome and gabled canal houses on the Herengracht. Inside you will find an inquiring look at Jewish and Christian history through the ages.

Two other canal museums - the Museum Van Loon on the Keizergracht, and the Willet-Holthuysen Museum on the Herengracht - reveal, in their lavish interiors, the luxury and art enjoyed by Dutch patrician families of the 17 th century and later.

And, being something of a purse fanatic, I recommend the Tassen (hand-bag) Museum, a collection of more than 4,000 purses from the Middle Ages to recent times, also located on the Herengracht. Feast your eyes on the beauty and craftsmanship of these purses, not to mention some wild creativity, and envy those who carried them.

Walks in this eastern zone might take in the Muntplein, with its fortified gate and 17 th -century clock tower and Bloemenmarkt (flower market), and the Speigelstraat, filled with antique shops whose windows are small art galleries in their own right. At the end of this street, beyond the Prinsengracht, lies the Museum Quartier.

And don't forget to seek out the Nine (little) Streets (De Negen Straatjes), a cluster of centuries-old lane-like byways that criss-cross all four of the canals and are now filled with shops featuring the very latest in fashion and beauty products.

Of course, you can also join a canal boat tour, and see much of this 17 th -century wonder from a different perspective, from down on the water itself.