Hundreds of animals in Etosha’s sprawling National Park depend on a few waterholes for their survival
Sep 4, 2009 7:58 AM By: Jack Souther 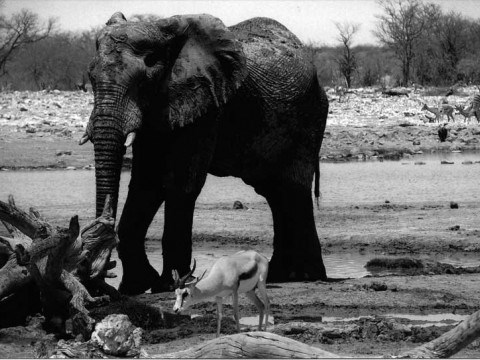 A lone giraffe stands motionless at the edge of the clearing waiting for its turn to drink. The zebras and a host of other animals, springboks, elands, hartebeests, and kudus have already quenched their thirst and left. But two lionesses, after lapping up a drink, decide to lie down for a rest near the edge of the waterhole. From the lofty vantage point atop its long neck the giraffe watches them warily for almost an hour before thirst finally overcomes its fear and it walks cautiously to the water's edge. With its long front legs spread wide and bent at the knees it lowers its head to drink. That's when one of the lionesses charges. It is just a bluff but the giraffe wheels and lopes away, its thirst unquenched, while the big cat strolls leisurely back to her resting place.

The standoff between the lion and giraffe was just one small episode in the nightly drama at Okaukuejo's waterhole. Surrounded by a sturdy fence and entered through a guarded gate during daylight hours only, Okaukuejo is one of three rest camps in Etosha's sprawling game park. The fence is not there to keep the animals in - it is there to keep them out. The camp provides a safe place to pitch tents, a few bungalows, a small shop, a bar, and a viewing platform located just inside the fence, only a few metres from the edge of the waterhole.

We had spent the day driving around the edge of the Etosha Pan or "Great White Place." Once a lake, the pan is now a parched expanse of dry clay where a few umbrella-thorn and mopane trees struggle to survive from one wet season to the next. Shimmering heat waves distort the landscape and the horizon disappears in a glistening mirage that merges with a pale cloudless sky. It was late afternoon when we rolled into camp and parked our Land Rover under a mopane tree. After the heat of the pan even the sparse shade of a small tree was a welcome relief. I was glad that Odie had reserved space for us in one of the bungalows - a rare treat that allowed us to leave the tents lashed to the top of the Rover, pick up a cool beer from the bar and head straight over to the viewing platform.

Etosha National Park covers an area of 23,000 sq km and is home to more than 100 species of mammals. They range in size from tiny jackals to five-ton elephants, and in behaviour from shy, ever cautious giraffes to bellicose, short-tempered black rhinos. But regardless of size or temperament every creature needs water to survive - and in Etosha's sun-baked pan there are not many places to get a drink.

The parade of animals to and from the waterhole never ceases, magnificent gemsbok with long rapier-like horns share the pond with tiny dik-dik, an antelope no bigger than a dog, bizarre blue wildebeest lower their outsized heads to the water alongside tusked warthogs - one the worlds ugliest animals. Most of them ignore the two lionesses, still dozing on the far side of the pond, but the giraffe and several of his long-necked friends continue to eye them from a discrete distance - preferring to go thirsty rather than risk an attack. They are still standing there at dusk when the elephants arrive.

Lead by a giant matriarch the long line of females and calves march straight for the water. The lions slink away and most of the other animals move aside for the giant pachyderms. Sucking water into their trunks and curling them back into their mouths they pump gallons of thirst-quenching fluid into their giant bodies and then wade in for an orgy of bathing. Using their long versatile trunks as showerheads they spray their backs and one another with muddy water. Some sit half submerged or wallow on their sides, churning the waterhole into a giant mud puddle. When they are finished their frolic and wade ashore the first blush of colour has appeared in the sky and the giraffes decide it is safe to drink. Within minutes the short, intense tropical sunset is in full bloom and its reflection turns the surface of the waterhole into shimmering gold. It is one of the most memorable moments of our trip to Africa - elephants silhouetted against an intense crimson sky and giraffes kneeling to drink from the glistening waterhole in front of us.

The sunset lasts only a few minutes and as darkness settles over the waterhole the floodlights are turned on. Strangely the animals pay no attention to the light and one by one the creatures of the night come to drink, each one casting a long eerie shadow as it makes its way down to the water's edge. A nimble cape fox is followed by a mean looking spotted hyena then, before I see the animal itself, I catch the glint of eyes just beyond the circle of light. A black rhino, resembling some prehistoric creature from another age, emerges slowly from the darkness and stands motionless a few metres from the water. Despite its thick armoured hide and the vicious weapon protruding from its snout the animal seems edgy, wheeling to stare first in one direction and then the other, giving the impression that if anything moved it was ready to charge. After a long draft of muddy water it turned abruptly and stomped off into the darkness.

Unlike many of the commercial game farms where a few animals are confined within a fence for the benefit of tourists, those that come to the Okaukuejo waterhole are free to roam throughout the park and, if they choose, to venture beyond its borders. They are truly wild animals whose only bond to the place is a need for water. Sitting safely on a viewing platform and watching them interact with one another as they come and go from the waterhole is as close as most of us will ever get to these magnificent creatures in their own environment.