The hauntingly beautiful Wadi Rum Meridian Writers' Group RUM, Jordan-When you become blasé about viewing camels that are backdropped by the rusty ochre sandstone formations of Wadi Rum you know it has been an astounding day.
Oct 16, 2009 7:56 AM By: Judi Lees 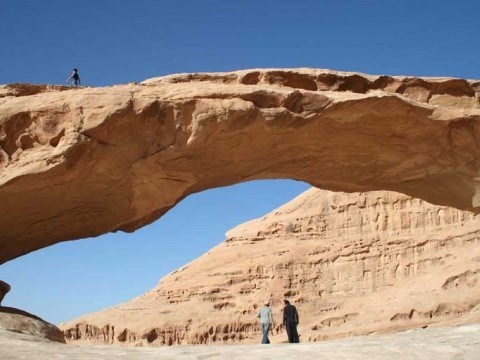 RUM, Jordan-When you become blasé about viewing camels that are backdropped by the rusty ochre sandstone formations of Wadi Rum you know it has been an astounding day. This sweeping desert landscape, in Jordan's southeast corner, is one of soft sand punctuated by towering craggy monoliths. It gave me a new reverence for what nature can produce and restored value to overused superlatives like "awesome" and "spectacular."

The mountains and sands of Wadi Rum would be remarkable in their own right, but the region has gained extra significance by its association with T.E. Lawrence. This is the area where the British military officer was based during the Arab Revolt against the Ottomans during the First World War. In his book, Seven Pillars of Wisdom , Lawrence describes his work with the Arabs to free them from Turkish rule, becoming almost one of them. His memoir was the basis for the epic 1962 film Lawrence of Arabia , which makes him out to be a hero although there's a great deal of contention about just how true his account of events was.

What's not in doubt is the accuracy of his description of Wadi Rum. "Vast, echoing and godlike," he called it. He got that right and I'm happy to report, even though I'm viewing it from an open, four-wheel-drive vehicle and not from atop a camel seat as Lawrence did, that the passage of nearly a century has not spoiled this place.

On this afternoon guided journey, we follow a route that seems to me trackless. We hop out to view 4,000-year-old rock drawings, an ancient watering hole and to make soft footprints in the sand that the wind silently covers within moments. This is a place where, on a short walk alone, you hear the whisper of your own breath and, when you let your imagination run, the mountains seem to become high-masted ships or, more fancifully, giant lemon meringue pies.

We view herds of haughty-looking camels and we clamber up the Bridge. This ages-old arch of rock gives amazing views and is not for vertigo sufferers. We get a glimpse of what climbers must experience here - Wadi Rum is on the rock climbers' "hot" list.

At day's end our guide, Ibrahim Abdel-Haq, instructs us to find a private spot to watch the sun perform its closing act. We sit silently as the fiery ball paints the desert first with bright pink, then with splashes of red and purple, and lastly in a soft apricot light before the curtain comes down, unbelievably black.

Our group is unusually quiet as we pile into the back of our sightseeing vehicles. This sudden descent of darkness makes me realize that the desert can be a harsh environment when it comes to survival, but is one of delight when it comes to beauty.

Tonight we will live as the desert's nomads long have, albeit it in a more pampered tourist style: we soon arrive at Captains Desert Camp to bed down in a goat-hair tent and enjoy Bedouin hospitality, including lamb cooked in the ground.

The wonderful Roman world of Jerash

JERASH, Jordan-This country's great archaeological wonder is, of course, Petra, the ancient city carved out of the desert rock. Petra deserves its pre-eminent status, but it's almost sad that it leaves in its shadow a site that, in most other countries, would be the number one visitor attraction.

Jerash is the best-preserved example of a Roman city in the Middle East: temples, baths, theatres, colonnaded streets, monumental arches and a restored hippodrome where the chariots again race.

Jerash is easy to explore and easy to reach - just 50 kilometres north of Amman, Jordan's capital. Ancient Jerash's eastern half, which was the residential district, has been built over by the modern city, but the western section, where the commercial and public structures were, has had the sand swept from it, revealing paved streets in which you can still see the ruts of chariot wheels. Much is still hidden, but excavation work is ongoing and every year a little more of the old Roman city is returned to the light of day.

This was a wealthy trading town. The avenues visitors walk along were laid out in the 1st century A.D., when it was coming into its own; much of the architecture lining those avenues is from the 2nd century A.D., when Jerash was at the height of its power. The temples of Artemis, the city's protector, and of Zeus, were both built then.

Nicomachus, one of the ancient world's foremost mathematicians, was from Jerash, but it's best known for its association with the Roman emperor Hadrian. Hadrian wintered here in 129-130 A.D., making this effectively the capital of the Roman Empire during that time. Hadrian's Arch, erected in his honour, is the first sight you have of ancient Jerash as you drive north from Amman. Even at its current height, 11 metres, the tribute is impressive. When it was built it stood twice as tall.

Just past the monumental arch is the hippodrome, restored in 2004. While other parts of Jerash are left to ghosts and your imagination, the hippodrome is a-bustle twice daily (except Tuesdays) with Roman soldiers on parade.

As the troops go through their paces Adam al-Smad, who plays Gaius Victor, commander of Legion Six, provides a commentary for those seated in the stands. He explains that each army line fought for eight minutes, then fell back to let the line behind it take over. There were, he says, 5,000 in a legion; a sub-unit, the century, was 80 soldiers. There's about half-a-century on the field today.

"I want you all to try to imagine yourself a horde of barbarians," Gaius Victor, marching back and forth, bellows at his audience. He has a British accent and there's a slight titter among those who are fans of Monty Python's Life of Brian , but the majority are carried along by his enthusiasm. After a display of how Rome disposed of barbarians come gladiatorial contests, chariots wheel around the stadium in great plumes of dust. A bit kitschy, perhaps, but it certainly brings the place to life.

For more information on the shows at the Jerash hippodrome visit www.jerashchariots.com .

For information on travel in Jordan visit the Jordan Tourism Board website at www.visitjordan.com .