Aurora Village, NWT I feel only slightly ridiculous wandering around at midnight in -30 C temperatures, fixedly scanning the coal black sky. Thankfully the full moon has lit up the snow-covered frozen lake like a centre-stage floodlight.
Feb 8, 2012 8:00 PM By: Lynn Martel 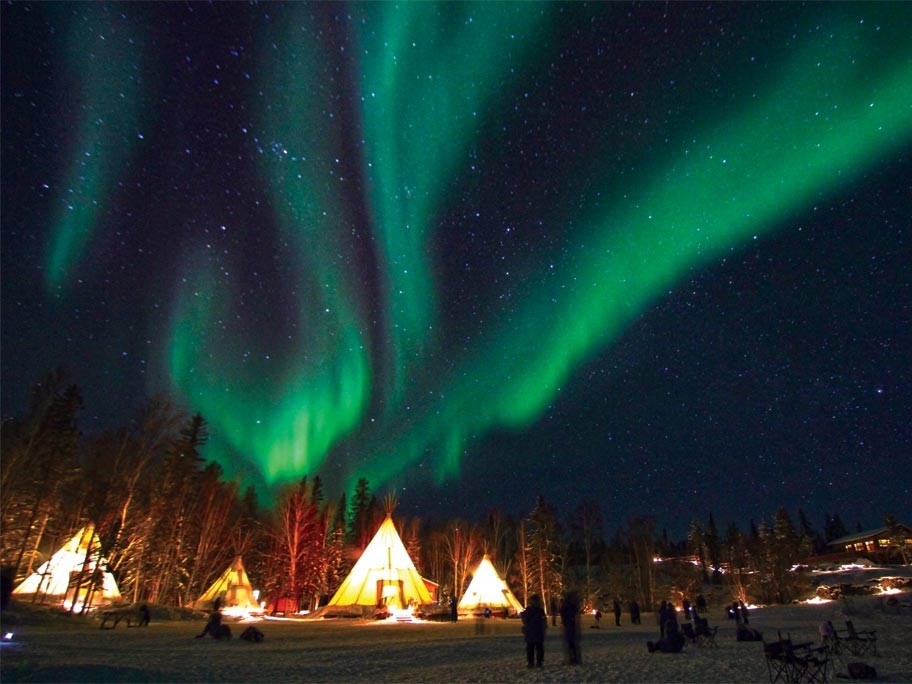 Aurora Village, NWT I feel only slightly ridiculous wandering around at midnight in -30 C temperatures, fixedly scanning the coal black sky. Thankfully the full moon has lit up the snow-covered frozen lake like a centre-stage floodlight. With any luck, I and the 50 Japanese tourists milling about stiffly like penguins under identical tour-supplied Arctic parkas with fur-trimmed hoods, will soon witness a spectacle more exciting than an ordinary full moon—Aurora Borealis.

Waiting for the show, we retreat periodically to the spacious dining hall to indulge in steaming homemade soup, bannock and hot chocolate. The only other North American visitor at Aurora Village, 30 minutes north of Yellowknife on the Ingraham Trail, a paved road that runs 70 kilometres before dead-ending to become, in winter months, one of the region's famous ice-roads, is Artie. He drove four straight days from his Minnesota home to fulfill his dream of seeing the Aurora. He's also a fan of Ice Road Truckers, a TV show I'd never heard of. Artie, I learn, knows more about Canada's north than I do, and my ancestors settled in Quebec in 1697.

The Japanese too, visit Yellowknife in January to fulfill their Aurora dreams. Earlier that day I was the only Canadian with eight Japanese on a dog-sled tour. With the daytime high never rising above -28 C, the sled ride lasted a mercifully brief 10 minutes. With low, mid-day sun casting a golden glow on the hilly, wooded landscape, I asked my guide, Clarke, if many Canadians visit Yellowknife in winter.

"Nope," he replied. "Mostly Japanese, some Germans and Americans. A few from Ontario."

The Japanese embrace extreme cold as part of the adventure.

Adventure and natural riches have lured "southerners" north of the 60th parallel since the fur trade. In 1898, a prospector headed for the Yukon's Klondike Gold Rush discovered gold in Yellowknife. From the 1930s through 1990s gold mines flourished in the area named for the Yellowknives Dene band who crafted knifes and tools from copper. Set on the shores of Great Slave Lake's Yellowknife Bay, Yellowknife became NWT's capital in 1967; an official city in 1970. Today the modern centre is home to 20,000, nearly half of NWT's 43,000 residents. Members of the three Dene nations, the Chipewyan, Slavey and Tli Cho (formerly Dogrib), comprise half the population, including the government which operates under a consensus, rather than party system.

The last local gold mine closed in 2004, but diamond mines have flourished since 1998, making NWT the world's third-largest producer. Like the gold, diamonds, and good-paying mining jobs, lure people north.

An Australian shopkeeper whose husband works in mine rescue explains Yellowknife is two different towns from winter—house party season—to summer, when 24-hour sunlight keeps folks outside round the clock.

At my hotel, the Moroccan chambermaid arrived three months ago via Montreal, Quebec City and Calgary, following her taxi-driving husband's employment opportunities.

"Yellowknife is different," she shrugs. "It's cold."

For true locals though, cold is part of their culture—and pride.

"I used to need my snow pants when it was –50 C, now it's not cold enough," said one young mother at a coffee shop.

I spend a day with Joe, an aboriginal whose business cards boast "50,000 years of experience." He grew up hunting seasonally with his grandparents, earned a civil engineering degree at the University of Manitoba, grew tired of his government desk job and started his tour business.

We drive across an ice road to the Dene community of Dettah, population 250 who lived without electricity until 1968. Parking his Ford Explorer to photograph a 20-centimetre-deep crack in the ice, he assures me it's more than a metre thick. But like every local I meet, he mentions winters are much warmer than they used to be. Two years ago a local who'd been building ice roads all his life "went through".

"When we lost Jimmy, that was a real wake up call," Joe said. "If it could happen to him, we got to start watching out."

His tour includes a stop at the Buffalo Airways' hangar, where a TV crew films a mechanic working on a DC3. I've never watched Ice Pilots either.

On my fourth, maybe fifth wander outside, I settle into a heated, covered viewing bench perched on a hilltop. As if on cue, a flicker of emerald green light darts across the treetops. Gradually more lights materialize, increasing in intensity and volume as if being squeezed from a tube.

For half an hour I'm oblivious to the sharp cold biting my cheeks as I marvel at the greens and yellows glimmering and flowing like giant ribbons in a gentle breeze. Despite everyone's wishing, the show ends and the glowing fire in the sky is quickly consumed by cold, black night.

Canadians, I decide, do it all wrong. Instead of mid-winter escapes to tropical beaches followed by the dreaded return to gnawing cold, we should all escape to Yellowknife to experience real cold while it still exists.