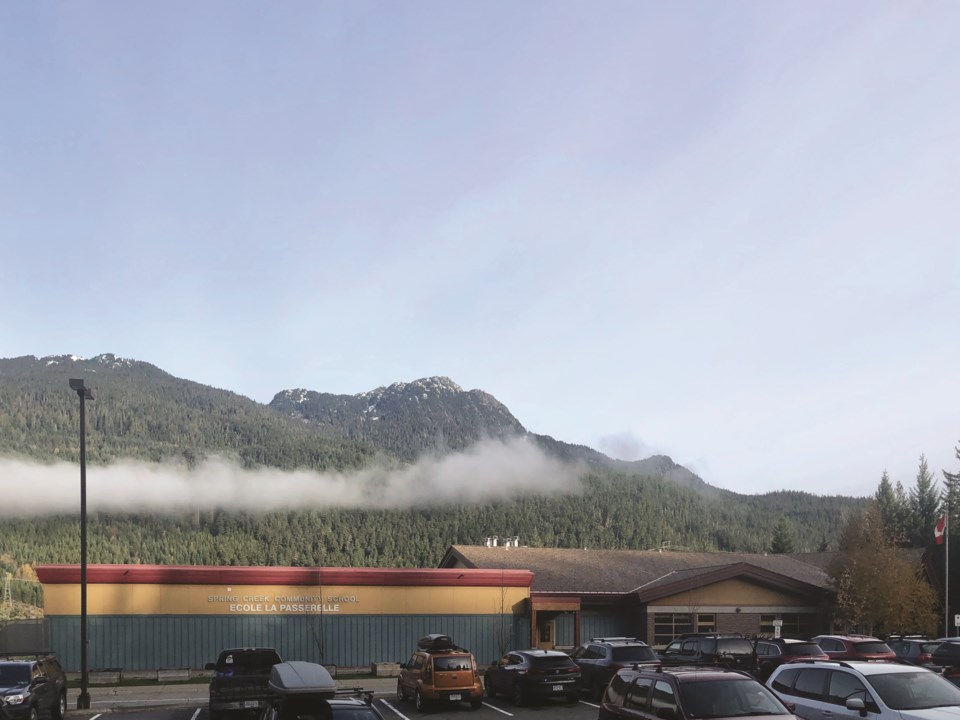 École La Passerelle in Spring Creek Elementary School is the latest school in the corridor to have a COVID-19 exposure. File photo by Megan Lalonde

Several schools in the Sea to Sky corridor have had recent COVID-19 exposures, but not all have been listed on Vancouver Coastal Health’s (VCH) school exposure list.

The latest is École La Passerelle, located on the Spring Creek Elementary School campus in Whistler. A letter was sent home to parents on Sept. 25, but the date of the potential exposure is not clear. The French school falls under the jurisdiction of Conseil Scolaire Francophone, not the Sea to Sky School District.

On Thursday, Sept. 24, Lisa McCullough, superintendent for School District No. 48 (Sea to Sky), sent a letter to parents at Pemberton’s Signal Hill Elementary to share that a “member of the … school community” had tested positive for COVID-19.

The letter goes on to say Vancouver Coastal Health (VCH) is performing contact tracing, while working to determine if anyone has been in contact with that person during their infectious period, and will contact anyone who needs further instruction.

“If you are not contacted by VCH, it has been determined that your child is not at risk for developing COVID-19,” the letter said.

That exposure—as well as an exposure at Mamquam Elementary and Howe Sound Secondary in Squamish—is listed on VCH’s school exposure list. VCH has indicated that it won’t necessarily be listing all exposures, despite provincial health officer Dr. Bonnie Henry’s assurance to parents they would be informed of exposures at school during a press conference on Monday, Sept. 28.

“It is across the province, all health authorities will be posting exposure events, so that’s somebody who tested positive and was in the school environment during their infectious period when they could’ve potentially exposed others,” Henry said.

She went on to say there have been cases where a teacher or student has tested positive but were not at school during their infectious period, so parents were not alerted.

However, Dr. Mark Lysyshyn, deputy medical health officer for VCH, said in an interview with the North Shore News on Wednesday, Sept. 23, that VCH will only list schools where it’s not possible to notify those who came in close contact with a person who tested positive for the virus.

The concern, he said, was students could be identified and subjected to the stigma of having the virus.

Meanwhile, health authorities like Fraser Health appear to be listing all school exposures.

In the meantime, one Richmond mom decided to cut through the muddled messaging and create a Facebook page, called BC School COVID Tracker, where parents can submit information on cases at their kids’ schools.

Kathy Marliss, whose daughter attends school in Vancouver, came up with the idea before school started after seeing a friend in Quebec create a similar parent resource in that province.

“Some health authorities said they would be sharing [information], but there was a lot of discrepancy of what would be shared,” Marliss said. “I saw more and more people in various Facebook groups saying, ‘I heard of a case in this school, but it’s not on the BCCDC website.’ It was out of necessity. I didn’t see anything like this popping up in terms of a website or page that was monitoring.”

Marliss said her aim is not to perpetuate rumours, and she will verify all exposure reports she’s sent. (See the full rules and limitations listed at facebook.com/BCSchoolCovidTracker.)

“I feel knowledge is power,” she added. “It isn’t about creating fear or anxiety.”

“It is a tremendous amount of work,” Marliss said. “It’s quite overwhelming… Obviously there is a need. People want this information. It’s clear in terms of the response we’re getting.”

She said she was surprised to come across a letter from the Sea to Sky district telling parents not to share any information regarding cases at their schools.

“It is also critically important that all members of the school district community and the parents of our students respect the privacy rights of every individual,” the letter said. “This means that individual members of our school community and/or parents should not provide any public statements or communications about potential or confirmed COVID-19 cases, unless directed to do so by VCH.”

Added Marliss, “The secrecy is building such tremendous distrust in these officials. It’s foolish. We’re going to find out. Parents talk. You should see how packed my inbox is.”

Phillip Clarke, director of instruction: learning services, with the Sea to Sky School District said in an email that the request all comes back to protecting privacy.

“The reason why we ask this is because the term ‘cases’ relates to specific children or staff members, and their health status,” he said. “This is private information. We want to avoid unnecessary speculation on the identity of individuals who may have tested positive. Additionally, speculation leads to inaccurate information, which has the potential to cause more harm than good. For clarity, general communication about potential exposures at school sites is not the concern. And further, under the approval of VCH, Lisa McCullough has sent and will continue to send generalized information whenever possible.”

In the Sept. 28 press conference, Henry said in response to a question on such letters that she didn’t “believe there’s been hush letters, as it were.”

“We do ask people to respect others’ privacy around specific individuals and not share information, perhaps about their own situation,” she added. “We do reassure people we’re not going to be telling the rest of the school or the class about your child or your family interaction.”

In the meantime, cases of COVID-19 for kids under 19 have continued to grow in the province since schools reopened, according to information from the B.C. Centre for Disease Control.

Jump to Sept. 24 (the latest available data from BCCDC), and an additional 144 kids under 10 have had confirmed cases for a total of 271 since Jan. 1, with an additional two hospitalizations.

Both groups have not seen any ICU cases or deaths.

In the end, Marliss said she hopes her group gives parents the information they need to make the right choices for their families.

“It becomes very emotional because I’m seeing people in distress every day,” she said. “I’m glad I’m able to bring them some kind of relief in knowing they have some power. For me, I do it also because it’s a coping strategy for me. I’m not the kind of person who can sit and wait for others to hand it to me. The ‘doing’ helps my own mental health.”

Pique reached out to several Whistler Parent Advisory Councils but none returned calls by deadline.