KABUL — A suicide car bombing on Sunday killed at least 13 people and wounded around 120 others in Afghanistan's western Ghor province, officials said.
Oct 18, 2020 7:17 AM By: Canadian Press 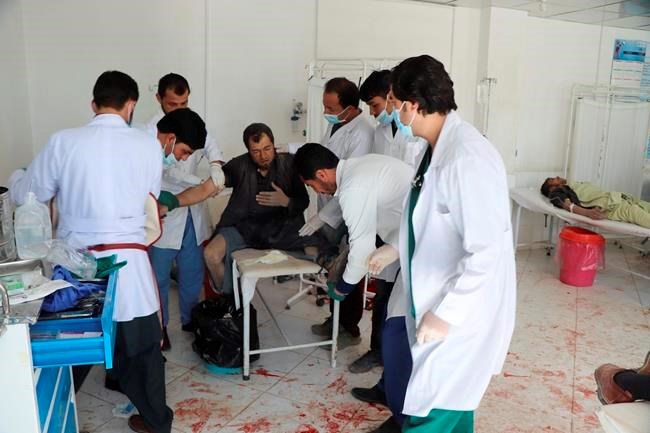 KABUL — A suicide car bombing on Sunday killed at least 13 people and wounded around 120 others in Afghanistan's western Ghor province, officials said.

The head of a hospital in Ghor, Mohammad Omer Lalzad, said emergency staff were treating dozens of people with both serious and light injuries from the bombing. He expected the death toll to rise.

Interior Ministry spokesman Tariq Aran said the car bombing struck near the entrance of the provincial police chief's office and other nearby government buildings in the area.

No one immediately claimed responsibility for the attack in Ghor, which comes amid an uptick in attacks by the Taliban as representatives of the group and Afghan government officials hold their first-ever face-to-face talks in Qatar, where the Taliban have had a political office for many years. The negotiations are meant to end decades of war. in Afghanistan.

Arif Aber, spokesman for the provincial governor in Ghor, said the blast was so strong that its sound could heard across Feroz Koh, the capital city of the province.

“It damaged and partially destroyed a few government buildings, including the police chief's office, the women's affairs department and the provincial office for refugees,” Aber said.

On Friday, the Taliban agreed to suspend attacks in southern Afghanistan, which displaced thousands of residents in recent days. That came after the U.S. vowed to halt all airstrikes and night raids in keeping with the peace agreement the U.S. signed with the Taliban in February.

The U.S. had been conducting airstrikes in support of Afghan forces trying to repel Taliban assaults in Helmand province, which threatened to derail the efforts to end Afghanistan’s war.

The peace talks in Qatar between the Taliban and Afghan government negotiators began in September, but after a ceremonious start became bogged down, mainly in the minutiae of Islamic jurisprudence.

While successful negotiations are seen as critical to ending the fighting, the withdrawal of American troops relies on the Taliban their commitments from the February accord to not support terror groups and fight all militants, most specifically the region’s Islamic State affiliate.

Barrett confirmed by Senate for Supreme Court, takes oath
Oct 27, 2020 12:35 AM
Comments
We welcome your feedback and encourage you to share your thoughts. We ask that you be respectful of others and their points of view, refrain from personal attacks and stay on topic. To learn about our commenting policies and how we moderate, please read our Community Guidelines.