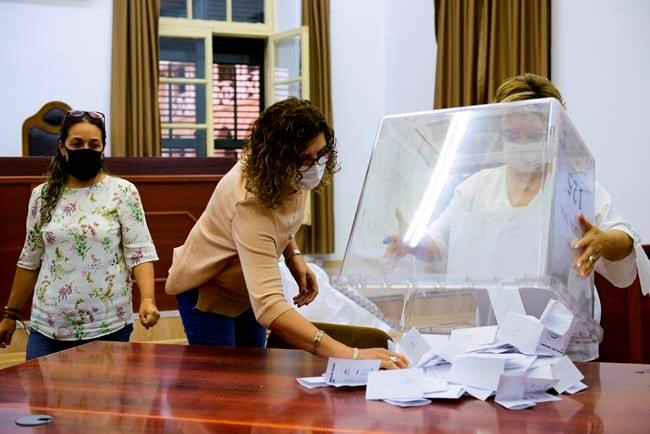 Ersin Tatar, who fully aligning Turkish Cypriot policies with those of regional patron Turkey, said any peace accord should take into account the “realities" in and around the war-divided east Mediterranean island. Tatar spoke after defeating leftist incumbent Mustafa Akinci in a runoff.

“It won’t be difficult to reach a settlement at the negotiating table if our friends the Greeks and Greek Cypriots properly analyze the strategic, economic and social balances in our region,” Tatar told supporters during a victory speech in the Turkish Cypriot half of the Cypriot capital Nicosia.

“They should know that if they continue these intransigent attitudes, we won’t give up our rights.”

Tatar also urged the European Union and the United Nations to be “fair” and change tack on how to assist negotiations because their previous approach has failed.

“You will no longer ignore the rights of the Turkish Cypriot people," Tatar said.

Cyprus was split in 1974 when Turkey invaded after a coup by supporters of union with Greece. Only Turkey recognizes a breakaway Turkish Cypriot state in the north that is economically and militarily dependent on Ankara. The island’s internationally recognized government has its seat in the Greek Cypriot south and is part of the 27-nation European Union.

Tatar, a 60-year-old scion of Turkish Cypriot political leaders, beat Akinci in the closely contested runoff that was beset by accusations of “unprecedented" meddling by Turkey in a bid to round up votes for the challenger.

Turkish Cypriot broadcaster BRT says with 100% of the votes counted, Tatar secured 51.74% of the vote compared to 48.26% for Akinci.

Akinci, 72, a champion of Turkish Cypriots who oppose Turkey's complete domination of their affairs and a backer of a federal deal with Greek Cypriots, conceded defeat to Tatar in a speech to supporters at his campaign headquarters, congratulating his opponent on his victory.

“We went through an election contest that wasn’t normal ... These results mark the end of my 45-year political career," Akinci said. "I wish good luck to our people.”

Tatar criticized those he said “accused the motherland of turning the election into a political tool" and expressed pride that “Turkey always stands by our side."

“Turkey will continue to make all necessary efforts to defend the rights of the Turkish Cypriot people,” Erdogan said.

Nearly five decades of U.N. facilitated attempts at achieving reunification based on a federal framework have failed.

U.N. Secretary-General Antonio Guterres is expected to soon call a meeting to bring together the two sides and Cyprus’ “guarantors” — Greece, Turkey and Britain — to scope out chances of resuming talks.

A negotiations reboot could help ease soaring tensions in waters off Greece and Cyprus over sea boundaries and energy exploration rights after Turkey redeployed a research vessel near the Greek island of Kastellorizo.

Turkey insists it has every legal right to search for hydrocarbons in waters where Greece and Cyprus claim exclusive economic rights. The Greek and Cypriot governments accuse Turkey of violating international law. The dispute raised fears of a military conflict between Greece and Turkey, which are NATO members but are strong regional rivals.

Tatar told The Associated Press in an interview last month that tensions would fade if Greek Cypriots agreed to divide up Cyprus' territorial waters and drilling rights with Turkish Cypriots before formal peace talks resume.

He also shares the Turkish government view that a federation may not be the most viable option and alternatives such as a two-state deal should be pursued.

Earlier this month, Turkish Foreign Ministry spokesman Hami Aksoy said Ankara wouldn't engage in peace talks if Greek Cypriots don’t preemptively agree to equally share decision-making powers with the minority Turkish Cypriots on all levels of an envisioned federal government. He said the alternative would be to start talks on a two-state deal.

But she said the Turkish Cypriot side had committed itself to a federal model in previous rounds of talks and that it would be difficult to shift that basis to something else.

Tugyan said what will noticeably change is the Turkish Cypriots' relationship with Turkey whose “interference" in their affairs “would get harsher than ever.”