MCALLEN, Texas — Texas’ surprising status as a battleground came into clearer focus on Friday as Democratic vice-presidential nominee Kamala Harris devoted one of the race's final days to campaigning across America's largest red state and early voter
Oct 31, 2020 2:05 AM By: Canadian Press 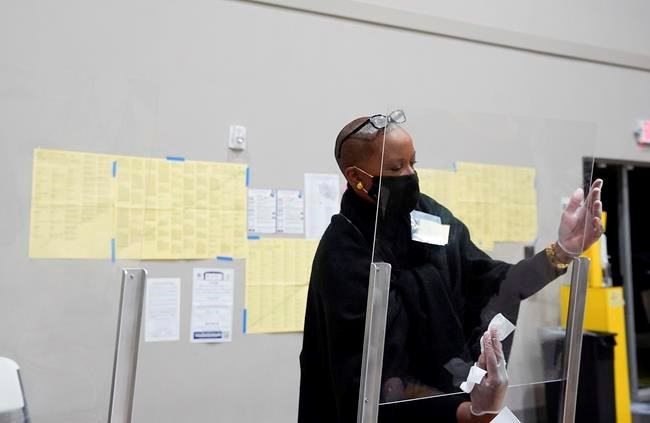 MCALLEN, Texas — Texas’ surprising status as a battleground came into clearer focus on Friday as Democratic nominee Kamala Harris devoted one of the race's final days to campaigning across America's largest red state and early voter turnout zoomed past 9 million — already more than the total number of ballots cast during the entire 2016 election.

Harris visited three cities, including McAllen in the Rio Grande Valley along the Mexican border, which has been ravaged this summer by the coronavirus. Part of the California senator's mission was to energize Latino voters, whose lower turnout rates have for years helped sink her party's hopes of making Texas more competitive.

“Texas has been turning it out,” Harris told a McAllen drive-in rally. “You’ve been standing in line. You’ve been organizing. You’ve been making a huge difference.”

By showing up closer to Election Day than anyone on a Democratic presidential ticket has in years, Harris in some ways fulfilled weeks of pleas by Texas Democrats for Joe Biden's presidential campaign to take their chances here more seriously. But Biden himself hasn't come, and the campaign has made relatively little investment in advertising and staff.

Texas’ heavily Latino border routinely ranks among the nation's lowest in turnout, meanwhile, and although early voting numbers were up sharply, residents here haven’t stampeded to the polls like voters have elsewhere.

Texas is approaching 18,000 confirmed deaths from COVID-19. Nearly 1 in 5 are occurring in the Rio Grande Valley, which in recent months became so overwhelmed that one hospital transferred coronavirus patients hundreds of miles away by helicopter almost daily. The virus is now even raging hundreds of miles west along the border, in El Paso. There, officials on Thursday ordered a two-week shutdown of non-essential activities — though not polling places.

Harris’ Rio Grande Valley rally also was not far from where top Trump administration officials a day earlier announced they had completely nearly 400 miles of border wall — a late attempt to show progress on perhaps the president’s best-known campaign promise four years ago. The area is the border's economic engine, with a population about 90% Mexican American and represents one of Texas' youngest and fastest-growing areas.

Texas' early votes exceeded the 8.9-plus million overall votes four the election years ago by Friday morning, according to an Associated Press tally. This year’s numbers were aided by Democratic activists challenging in court for, and winning, the right to extend early voting by one week amid the coronavirus pandemic.

Hawaii also surpassed its 2016 voter turnout, according to the AP tally, while Georgia and Washington state were also closing in.

Texas voters don’t register by party affiliation. Turnout has also been inflated by the state's booming population. More than 16.9 million people are registered to vote in 2020, 1.8 million more than 2016's about 15.1-plus million. The number of early votes so far accounts for only about 53% of statewide registered voters.

Still, the fact that Texas exceeded its entire vote total for the past presidential cycle hours before the early voting period ended Friday evening — and prior to millions more likely being cast on Election Day — hints at a potential electoral sea change, Democrats say.

For the party, anything different is likely positive. The party hasn’t won a state office in Texas since 1994 — the nation’s longest political losing streak. It now believes it has a chance to seize control of the state House, flip as many as six congressional seats and a Senate seat.

President Donald Trump carried Texas against Hillary Clinton in 2016 by 9 points, but that was the smallest margin of Republican presidential victory since 1996.

Texas has the highest share of its registered voters who are either new or infrequent voters of any battleground state, according to an Associated Press analysis of data from the political data firm L2. Roughly half of its voters have either never cast a ballot or done so in half or fewer of the elections for which they were eligible.

So far, 36% of Texas' vote comes from this group of irregular voters. That could bode well for Trump, since his campaign has made a point of attracting voters who hadn't been engaged in politics, just like he did in 2016.

Also, because Texas is one of the few states that maintained its already-strict rules preventing most residents from using mail ballots during the pandemic, some of the lines at in-person early voting locations may reflect it being the only way most voters can cast a ballot before Election Day — further potentially inflating the totals.

Biden’s campaign has for months insisted that Texas, with its 38 electoral votes, is among the traditionally conservative states it is looking to flip, though it has long been more bullish on Arizona.

Harris on Friday hit Fort Worth, Houston and McAllen, where turnout news wasn't all positive.

Early voting turnout in Hidalgo County, which includes McAllen, was just over 44%. That is slightly up from early voting in 2016 but still well below Houston, the state's largest city, where turnout is above 54%, and booming suburban counties where turnout has already skyrocketed past 60%.

Joining Harris was former Texas Democratic congressman and presidential candidate Beto O’Rourke, who knocked on doors trying to increase turnout. O’Rourke also struggled to attract voters along the heavily Democratic border two years ago in his narrow U.S. Senate loss, faring worse in some South Texas counties than Clinton had.

He said Rio Grande Valley voters will likely be motivated by the Trump's bungled coronavirus response.

“This part of Texas has borne witness to the cruelty of the Trump administration," O'Rourke said.

Will Weissert And Paul J. Weber, The Associated Press