KAMPALA, Uganda — The women grappled with each other inside the vehicle. The driver jerked to ease the grip around her neck, then turned to elbow her attacker in the back seat. She flung the door open to make her escape, ending the simulated attack.
Oct 18, 2020 7:02 AM By: Canadian Press 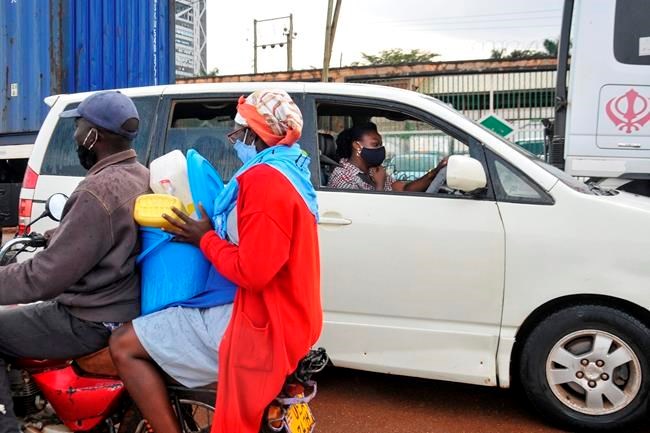 KAMPALA, Uganda — The women grappled with each other inside the vehicle. The driver jerked to ease the grip around her neck, then turned to elbow her attacker in the back seat. She flung the door open to make her escape, ending the simulated attack.

“This one is too strong for me," the attacker said, smiling and shaking her head. Then it was another woman's turn in the exercise to prepare drivers for Uganda's new all-female ride-hailing service, Diva Taxi.

The taxi service, dreamed up by a local woman who lost her logistics job at the start of the coronavirus outbreak, was launched in June and has recruited over 70 drivers. They range from college students to mothers hoping to make good use of their secondhand Toyotas.

“It started off as a joke, supported by close friends and family, but eventually the idea picked up,” said company spokeswoman Rebecca Makyeli. “They said, ‘Why not? As ladies, you know we can no longer slay on Instagram on the outside, so why don’t we slay as divas with a cause.' So we called it Diva Taxi.”

It's uncommon to find women taxi drivers in Uganda, a socially conservative East African country where most women on farms or pursue work in the informal sector.

Diva Taxi believes countless women are looking for job opportunities at a time of severe economic distress. The International Labor Organization has said women’s employment in developing countries is likely to be hit harder than men’s in the pandemic.

“I should say I was personally affected by COVID," Diva Taxi founder Gillian Kobusingye said.

A regular , she found herself grounded indefinitely as authorities imposed restrictions on movement to slow the spread of the virus. For several weeks, even taxis were not authorized to operate in Uganda.

Still, Kobusingye felt optimistic. “Despite whatever circumstance in the world, there will be need of something to reach somebody ... And how does that happen? Through transport,” she said.

She believed that a woman seeking to become a driver was likely to want the opportunity more than any man. And she backed women to be more reliable.

“Our ladies are extremely hardworking, very motivated, and I like their sense of pride when they do this work," she said. "They do it with one heart compared to other people, and that’s the difference we have with our competitors.”

Some clients, who include men, agree.

“The divas are always on time,” said Kampala-based auditor Jemimah Bamwebaze, a regular user. She also feels safer "being driven by a fellow woman.”

A prospective driver must have a car in good condition and a smartphone equipped with the mobile app that clients use, along with a valid driver's license and a certificate of good conduct issued by Interpol.

With Diva Taxi, 85% of proceeds from a trip go to the driver, strikingly low in Uganda but part of a plan to size up the market, Makyeli said.

Driver Donna Ochen, a FedEx accountant furloughed in March who looks after three children, said she had been “doing nothing” at home when she saw a Diva Taxi employee on television discussing opportunities for women. With the consent of her skeptical husband, she contacted the company and was recruited.

“I decided to take it up because it would be an opportunity for me to serve and earn and support my family,” Ochen said. And "it would empower me to do something for myself rather than sitting.”

Another driver, college student Tracy Abola, said her mother, a teacher, had been out of work since schools were shut down in March. Abola had been driving a 1998 Toyota “to keep up appearances with friends” until she learned she could make money with Diva Taxi.

“So I decided to do something so that I can also help a bit at home,” she said.

The Diva Taxi app has been downloaded at least 500 times, and each of the company's 72 drivers makes an average of 30 rides each week, Makyeli said. The company expects to have 2,000 active users by the end of this year, a modest target in a city of over 3 million people where taxis and passenger motorcycles are the main means of transport for the working class.

Despite the security training — each driver also receives a canister of pepper spray — safety remains a concern.

Ochen said she drives only during the day “to avoid being caught up in any tricky situations," including with drunken groups.

Even as she hopes to return to her job as an accountant, she plans to remain a Diva Taxi driver for as long as possible.

“We love what we are doing and it's really fun,” said founder Kobusingye, an occasional driver herself. “I can't wait to partner with every woman out there that's willing to be part of Diva Taxi.”

Barrett confirmed by Senate for Supreme Court, takes oath
Oct 27, 2020 12:35 AM
Comments
We welcome your feedback and encourage you to share your thoughts. We ask that you be respectful of others and their points of view, refrain from personal attacks and stay on topic. To learn about our commenting policies and how we moderate, please read our Community Guidelines.