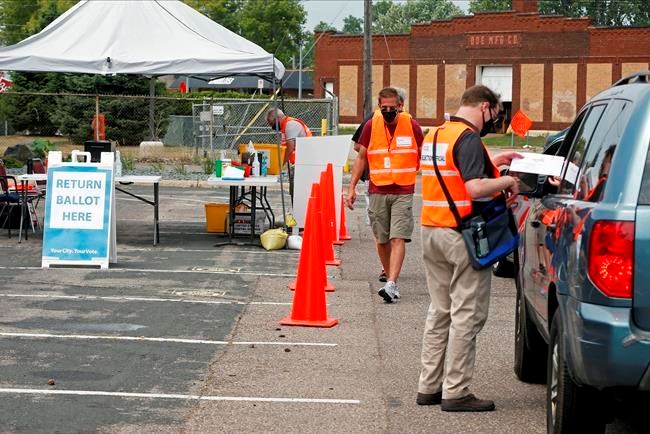 WASHINGTON — U.S. intelligence officials believe that Russia is using a variety of measures to denigrate Democratic presidential candidate Joe Biden ahead of the November election and that individuals linked to the Kremlin are boosting President Donald Trump’s reelection bid, the country’s counterintelligence chief said in the most specific warning to date about the threat of foreign interference.

U.S. officials also believe China does not want Trump to win a second term and has accelerated its criticism of the White House, expanding its efforts to shape public policy in America and to pressure political figures seen as opposed to Beijing’s interests.

The statement Friday from William Evanina is believed to be the most pointed declaration by the U.S. intelligence community linking the Kremlin to efforts to get Trump reelected — a sensitive subject for a president who has rejected intelligence agency assessments that Russia tried to help him in 2016. It also connects Moscow’s disapproval of Biden to his role as in shaping Obama administration policies supporting Ukraine, an important U.S. ally, and opposing Russian leader Vladimir Putin.

Asked about the intelligence assessment Friday evening in Bedminster, New Jersey, Trump appeared to dispute the idea that Russia was disparaging Biden. “I think the last person Russia wants to see in office is Donald Trump because nobody has been tougher on Russia than I have — ever,” he said.

But the president seemed to agree with the intelligence indicating China didn’t want him reelected. “If Joe Biden was president, China would own our country,” he said.

Evanina’s statement, three months before the election, comes amid criticism from House Speaker Nancy Pelosi and other congressional Democrats that the intelligence community has been withholding from the public specific intelligence information about the threat of foreign interference in American politics.

“The facts are chilling,” Sen. Richard Blumenthal, D-Conn., wrote in an op-ed published Friday evening in The Washington Post. “I believe the American public needs and deserves to know them. The information should be declassified immediately.”

The latest intelligence assessment reflects concerns not only about Russia but China and Iran as well, warning that hostile foreign actors may seek to compromise election infrastructure, interfere with the voting process or call into question voting results. Despite those efforts, officials see it as unlikely that anyone could manipulate voting results in any sweeping way, Evanina said.

“Many foreign actors have a preference for who wins the election, which they express through a range of overt and private statements; covert influence efforts are rarer,” said Evanina, director of the National Counterintelligence and Security Center. “We are primarily concerned about the ongoing and potential activity by China, Russia and Iran.”

Concerns about election interference are especially acute following a wide-ranging effort by Russia to meddle in the 2016 election on Trump’s behalf through both the hacking of Democratic emails and a covert social media campaign aimed at sowing discord among U.S. voters. Trump has routinely resisted the idea that the Kremlin him in 2016, but the intelligence assessment released Friday indicates that unnamed Kremlin-linked actors are again working to boost his candidacy on social media and Russian television.

The White House reacted to Friday’s news with a statement saying “the United States will not tolerate foreign interference in our electoral processes and will respond to malicious foreign threats that target our democratic institutions.”

Tony Blinken, a senior adviser to Biden’s campaign, responded that Trump “has publicly and repeatedly invited, emboldened, and even tried to coerce foreign interference in American elections. ... Joe Biden, on the other hand, has led the fight against foreign interference for years.”

Democrats in Congress who have participated in recent classified briefings on election interference have expressed alarm at what they have heard. They have urged the U.S. intelligence community to make public some of their concerns in part to avoid a repeat of 2016, when Obama administration officials were seen as slow and overly deliberate in their public discussion of active Russian measures in that year’s election.

Pelosi and Intelligence Committee Chairman Adam Schiff, both California Democrats, said Friday that they were “pleased that Mr. Evanina heeded our call to make additional details public about Russia’s malign interference campaign.” But they also criticized him for naming Iran and China “as equal threats to our democratic elections.”

When it comes to Russia, U.S. officials assess that it is working to “denigrate” Biden and what it sees as an anti-Russia “establishment” among his supporters, Evanina said. U.S. officials believe that tracks Moscow’s criticism of Biden when he was for his role in Ukraine policies and his support of opposition to Putin inside Russia.

The U.S. statement called out by name Andrii Derkach, a pro-Russia Ukrainian lawmaker who has been active in unsubstantiated corruption allegations against Biden and his son Hunter, who used to sit on the board of Burisma, an Ukrainian natural gas company. That effort has included publicizing leaked phone calls.

Democrats, including members of the Senate intelligence panel, have voiced concerns that an ongoing Republican probe into Hunter Biden and his work in Ukraine would parallel Russian efforts and amplify Russian disinformation. That investigation is being led by Sen. Ron Johnson of Wisconsin, the chairman of Senate Homeland Security and Governmental Affairs committee. He has denied any wrongdoing.

Though U.S. officials allege that China has its own preference, Friday’s statement did not directly accuse Beijing of election interference or taking action to prop up Biden.

Instead, the statement said, China views Trump as “unpredictable” and does not want to see him win reelection. China has been expanding its influence efforts ahead of the November election in an effort to shape U.S. policy and pressure political figures it sees as against Beijing.

The Trump administration’s relationship with Beijing has taken a starkly more adversarial tone in recent weeks, including the closure of China’s consulate in Houston and an executive order Thursday that banned dealings with the Chinese owners of consumer apps TikTok and WeChat,

“Although China will continue to weigh the risks and benefits of aggressive action, its public rhetoric over the past few months has grown increasingly critical of the current Administration’s COVID-19 response, closure of China’s Houston Consulate, and actions on other issues,” the statement said.

On Iran, the assessment said Tehran seeks to undermine U.S. democratic institutions as well as Trump and divide America before the election.

“Iran’s efforts along these lines probably will focus on online influence, such as spreading disinformation on social media and recirculating anti-U.S. content,” Evanina wrote. “Tehran’s motivation to conduct such activities is, in part, driven by a perception that President Trump’s re-election would result in a continuation of U.S. pressure on Iran in an effort to foment regime change.”

During a panel discussion later Friday at the DEF CON hacker convention, federal cybersecurity officials were asked which foreign threat they considered most serious.

“I don’t think I would say one is scarier than the other, per se. Certainly some of these adversaries are at little bit more experienced,” said the National Security Agency’s election lead, David Imbordino.

“I couldn’t agree more,” said Cynthia Kaiser, the FBI’s deputy chief of analysis for national cyber threats. “If if you ask me what the biggest threat is, it’s the kind of constant drumbeat or influence campaigns that are going to make people feel like they are less confident in our (elections) system.”

Meghan's lawyers deny she co-operated with royal book authors
Sep 21, 2020 10:12 AM
Comments
We welcome your feedback and encourage you to share your thoughts. We ask that you be respectful of others and their points of view, refrain from personal attacks and stay on topic. To learn about our commenting policies and how we moderate, please read our Community Guidelines.