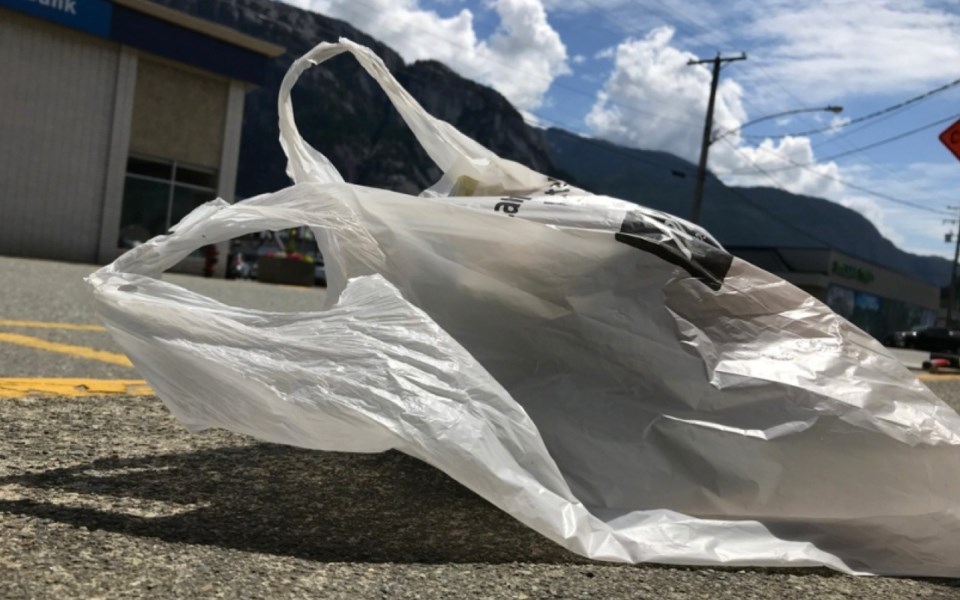 Check-out plastic bags are likely to stay in Squamish — but they will cost at least 10 cents.

During the Sept. 17 Committee of the Whole meeting, municipal staff presented Squamish council with two possible versions of the proposed plastic

One, dubbed Scenario A, aims to reduce plastics by focusing on cutting greenhouse gas emissions.

The other, Scenario B, focused on reducing plastics as much as possible, including the elimination of single-use plastic check-out bags.

Both plans outlined the use of fees to reduce the use of check-out bags.

During their meeting Tuesday, councillors voted 5-1 in favour of pursuing Scenario A.

"I think that it is a step in the right direction," said acting mayor Jenna Stoner. "I think we need to start charging for single-use items, especially plastics and paper bags."

The sole dissenting vote was Coun. Chris Pettingill. He said the fees didn't do enough to stop people from using plastic.

The main tool for reducing plastics under Scenario A are fees for check-out bags at places like grocery stores. Businesses must first ask customers if they want a bag. If customers say yes, a minimum fee is applied at a rate of:

"I'm not sure these fees are high enough to make that behaviour change," said Pettingill, when referring to the plastic bag charge.

Staff said that the fees were created to line up with the amount of greenhouse gas emissions each type of bag created.

The idea is that people need to be charged less for plastic bags, because paper bags require more resources to be manufactured, which would presumably create more greenhouse gas emissions.

"In order to prioritize and limit [greenhouse gas emissions], an increase in the use of paper bags should be avoided at all costs," reads the staff report. "Therefore, multiple types of bags should be offered."

Paper bags require three reuses to be just as environmentally efficient as one single-use plastic bag, according to staff's findings.

As a result, District staff recommended that the paper bag fee be three times that of the plastic bag fee.

Those numbers shown by staff also indicated that a reusable synthetic fabric bag needs to be used 11 times to be as efficient as a single-use plastic bag.

A cotton bag needs to be used 131 times.

There would also be some exemptions with respect to plastic bag fees. Plastic bags would still be available for meat, seafood, newspapers, baked goods and a variety of other products.

The main goal is to cut down on check-out bags at groceries and stores, staff said.

Council's choice to go for Scenario A represents a change of plans in comparison with their original direction to staff.

Back in February, councillors asked staff to craft a ban on plastic bags and straws rather than a reduction.

The change in direction also extends to straws.

Instead of an outright ban of plastic straws, District staff have recommended a straw-by-demand approach.

Bendable plastic straws will be offered to those who ask for them.

It's a measure that takes into account concerns raised by accessibility advocates.

Some people with disabilities require plastic straws, as no other materials as flexible, can withstand hot and cold temperatures, and are as sanitary as disposable plastic straws.

As part of the proposed bylaw, biodegradable and compostable bags will be banned outright — staff said they end up doing comparable amounts of damage to the environment as regular plastic.

The cost of the new bylaw is expected to reach into the tens of thousands.

A part-time bylaw enforcement officer would cost $42,808, a waste composition study would be $5,000 and communication tools for public education would cost $8,000.

However, in addition to enforcing the plastic reduction, the officer would also help enforce reductions in contaminants in recycling and compost bins, which is a separate District initiative.

A more finalized version of the bylaw is expected to be presented to council between November and December, and the terms are still subject to change.