A delicate, dark creature in a sparkling dress 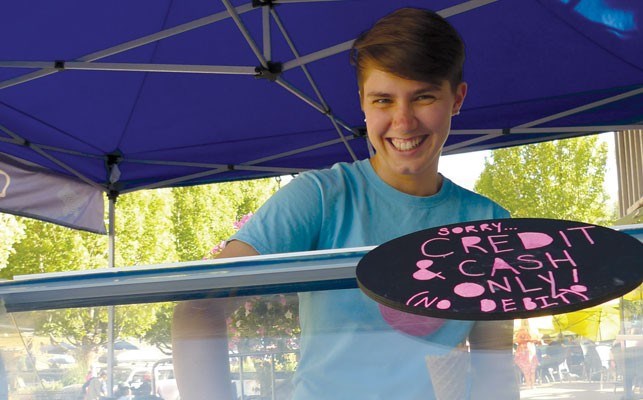 "If some exquisite little goddess of gluttony were to exist, her name would surely be Vanilla, and she would be a delicate, slim, dark creature in a dress sparkling with tiny perfumed crystals."

Even if you've never been a big fan of vanilla, you might just become one after that evocative image from historian Maguelonne Toussaint-Samat in her 1992 classic, A History of Food.

I have to hand it to Ms. Toussaint-Samat, daughter of the prolific 1930s Camargue-born crime writer, Jean-Toussaint Samat — associate of Paris' École des Hautes Études — and prodigious author in her own right, including 17 books on cuisine, history and French culture. She obviously has an eye and a nose for the pleasures of vanilla.

But you don't need to convince me of vanilla's allure. Or longtime Whistlerite Kris Ongman, namesake of Vanilla KO from Whistler's own Lucia Gelato.

"We had a friend (Kris) and every time we'd go to a gelato place in Italy she'd only order vanilla," says Kathryn Shepherd, creator of Lucia Gelato, recalling the onerous research she and her husband, Tony, suffered through before opening Lucia.

"We're like, 'Don't you want to try the other flavours?!' And she's like, 'no, I love vanilla, why would I try other flavours? This is what I love.'"

When it came time to name Lucia's vanilla gelato, it was KO all the way, for Kris O. And here you thought the KO stood for "knockout." Well, maybe that, too. Vanilla knockout.

See, the thing about vanilla is either you love it, or you shrug. If you're in the latter category, just think for a minute about that delicate, dark creature in a dress with perfumed crystals.

Vanilla is one of the most popular flavourings in the world. "Among the spices it's unique for the richness, depth and persistence of its flavour," writes scientific guru of food, Harold McGee, in his excellent book, On Food and Cooking. Because of the hand-pollination of the vanilla flowers, curing the pods, and the low productivity of the regions that produce it, vanilla is also the second most expensive flavouring, after saffron.

According to McGee, real vanilla costs about 100 times more to produce than synthetic, ergo tons of synthetic vanilla everywhere.

About half the vanilla France uses is synthetic; about 90 per cent the U.S. uses is. You figure out where Canada might sit in that equation. But I'd be the first to tell you to put down that bottle of syntho vanilla or, better, don't even pick it up. True vanilla may seem expensive, but given the depth and complexities it delivers and how little you need of it, it's not.

Real vanilla comes from the pod, often called a bean, of a climbing orchid native to Central America and northern South America. Wouldn't you know it? It was those Aztecs, who also gave us chocolate, who turned Europe on to vanilla.

The long thin pods, which Toussaint-Samat likens to the tresses of the local women's hair, may have fallen to the ground before they were fully ripe, then fermented under the cover of the rainforest humus to lure the first humans, "giving off an unexpected aroma, since the slender white flowers are almost scentless."

The fresh pod contains thousands of tiny seeds embedded in a sticky resin of sugars, amino acids and the main vanilla aroma compound — vanillin. Drying and curing the pod frees up the vanillin while creating even more aroma molecules.

There are some 100 species of the tropical genus Vanilla. But the vanilla that the Spanish conquistadors brought back to Europe (the word vainilla is the Spanish diminutive for "sheath" or "husk" from the Latin vagina) was likely from plants cultivated by the Totonac people along the eastern coast of what is now Mexico, near Veracruz. They traded it north to the Aztecs, who used it to flavour their chocolate drinks. The pods, writes Toussaint-Samat, were reserved for "great dignitaries to add an even more delicious flavour to their drink of cocoa sweetened with honey." Try some.

It took a Belgian biologist to figure out you could pollinate the pods by hand when the plants were grown far from the pollinating insects native to their home. After that, the sky was the limit, at least a sky over places with enough high humidity and bright, indirect sunlight for growing the vanilla orchid.

Vanilla is now produced far from its origins. In the heyday of empire, the French took vanilla vines to their colonies in Polynesia and on the east coast of Africa and Madagascar. But production still lags far behind demand, another factor contributing to its high price.

The DIY community will be the first to tell you that you can grow your own vanilla plants, but be prepared and be patient. It will take three to five years for your plant to bloom.

In the meantime, enjoy your vanilla best you can. Nesters Market in Whistler sells vanilla beans, organic powdered vanilla and real vanilla extract. In Vancouver, you can find several choice varieties of real vanilla at Gourmet Warehouse.

As for instant gratification, go for Lucia's Vanilla KO or, if you're more of an ice cream person, Häagen-Dazs makes the best. They have two vanilla flavours — vanilla straight up, with a white vanilla orchid on the label, and vanilla bean, sporting brown vanilla pods. After repeated testing, my vanilla buds and those of hubby's tell us the straight vanilla is better — a lovely vanilla flavour (from Madagascar), plus it's less sweet.

But have fun doing your own vanilla research!

Glenda Bartosh is an award-winning journalist whose first ice cream love was vanilla.