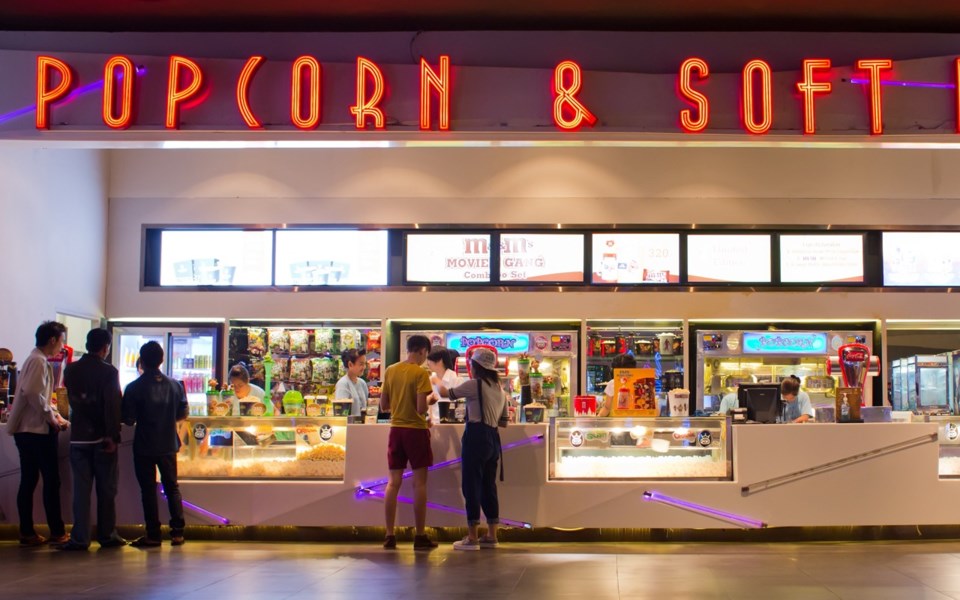 A big part of the pleasure of heading to the movies is the junk food at the concession stand—unless it's popcorn. Popcorn is the worst. Shutterstock Photo

Following in their footsteps, and in honour of the 19th annual Whistler Film Festival, I've decided to compile a highly unscientific ranking of movie-theatre snacks, those sticky, salty and sweet treats that play the perfect accompaniment to our most formative cinematic memories.

Whoever convinced North American moviegoers that popcorn should be the go-to theatre snack is the greatest conman in the entire movie business—and that's saying something.

I realize I'm about to lose a lot of you with my very first item on this list. Canadians, after all, can't seem to get enough of the stuff, consuming 1.6 billion quarts of popcorn a year. But why? Popcorn is basically the Milli Vanilli of movie snacks: all flash and no substance. Nothing but crunchy air. Everything about it is designed to make you spend more money; it's overly salty, forcing you to shell out more for watery fountain pop; it's not at all filling, meaning you can down multiple bags, no problem; and it's marked up, on average, a whopping 1,275 per cent, which led a Michigan man to sue his local AMC several years back. The hero we need, if you ask me.

Movie-theatre nachos are the exclusive domain of the brave of heart and the strong of stomach. Now, don't get me wrong, I'm a big fan of nachos in most forms, but cinema nachos are another beast entirely. Usually consisting of stale, deafeningly crunchy chips that taste only slightly better than salted cardboard, and drowned in a sludge of flavourless liquid cheese that looks like it was scooped from a burbling vat of nuclear waste, I would not advise consuming movie-theatre nachos for any reason, ever.

There's a time and a place for ice cream, and the dark, shoulder-to-shoulder confines of a movie theatre ain't it, chief. There is a certain novelty to eating ice cream in non-traditional ice-cream-eating venues, but that novelty quickly wears off as soon as that sticky smear of Rocky Road gets all over your knuckles—or worse, your pants—with only the one, maddeningly ineffective napkin at the ready.

Do me a favour: be a normal person and eat your ice cream alone in bed while sobbing softly and watching Golden Girls reruns like the rest of us.

Milk Duds are kind of like a visit to the dentist. Sure, it seems cool at first when you're chatting up the cute dental hygienist and watching your favourite episode of Golden Girls on a TV hanging from the roof, but before you know it, doc is wrist-deep in pearly whites tearing out a cavity with his bare hands. Or something. Milk Duds are a delicious caramel-y treat, but goddamn, are they ever work. After the sixth or seventh chewy gob, your jaw starts to feel like it's just been pummelled by '90s-era Mike Tyson for 12 rounds straight. I want to love Milk Duds, but I'm not willing to put in the work that this demanding relationship requires.

Now we're getting to the good stuff. Gummy Bears are soft, tidy and noiseless, the Holy Trifecta of movie-theatre snackdom. My only complaint is their overly saccharine flavour can get to be a bit much after a while. For a tastier alternative, may I recommend Real Fruit Gummies, made with real fruit (and real corn syrup—yum!) that have developed into one of my worst addictions. Send help.

Maltesers are one of those treats that are synonymous with a night at the cinema. According to my rigourous polling (of one person), the movie theatre is often the only place some people buy Maltesers.

I'm not quite sure what makes them an ideal theatre snack. Maybe it's the delightful coat-your-mouth sensation you get, without the heaviness and stickiness of other chocolaty snacks (looking at you, Milk Duds). Of course, the crispy malted milk centre does come with a certain noisiness, but the decibel level pales in comparison to the devil's snack, popcorn.

The cinema is a place steeped in nostalgia. Nowadays, the movie-going experience has been diluted by the endless number of films at our fingertips thanks to the glut of streaming platforms available to us, but nothing will replicate the distinct, childlike pleasure of heading to the cinema. Part of the fun was cajoling your parents into buying you the sugariest, teeth-rotting treats money could buy, and for many a kid like myself, that meant swamp pop. Delicious, confusing swamp pop.

For the uninitiated, swamp pop is a cocktail of various fountain sodas that is usually more fun to make than it is to actually drink. But, like most things, it's all about the journey, not the destination.

I once went to one of those fancy movie theatres in Portland (where else?) that played, like, obscure Quebecois auteur cinema. But the best part wasn't the art-house lineup, it was the gourmet cuisine you could order straight to your seat—a plush recliner, I should add—from a Star-Trek-esque, high-tech display panel. It was badass. I imagine it's a similar feeling to getting your kids to fetch a sandwich from the fridge while you watch The Goonies for the 17th time—except without all those pesky parental responsibilities involved.

There was this other time I went to go see Pan's Labyrinth and my college friend busted out a giant loaf of pumpernickel and spinach dip from her purse. Somehow, with the passive-aggressive gaze of the entire row of faithful ticket-buyers bearing down on us, that spinach dip tasted better than it ever had.

Twizzlers are close to the perfect cinema food: tasty, interactive and practical—is there a better way of sipping swamp pop than through the bit-off ends of a cherry Twizzler? (I feel compelled to mention here that I am a recently diagnosed diabetic; I'm sure these two things are unrelated.)

Liquorice, I might add, is also perfect for flinging long distances, like when these two noisy teen girls were ruining Bad Santa for me with their incessant chatter in an otherwise empty theatre. It was a perfect toss.

Hey, no one said these items had to be sold in theatres. A sneaky wobbly pop is bound to make any film better, and let's be honest, there are some movies that are only tolerable with a little liquid courage. Some cinemas, like the aforementioned hipster one in Portland or the Rio in Vancouver, have caught on to this and actually do sell alcohol. I'm all for it, as long as they're OK with my Twizzler sippy straw.

OK, that's it for now, folks. The Whistler Film Festival, which runs Dec. 4 to 8, is loaded with tons of funky little Canuck indie flicks this year, and I highly recommend you check out the offerings—with your favourite cinematic snack of choice, of course.

Don't agree with my list? Think I missed something? Looking for sweet vengeance because I smoked you in the back of the head with a piece of liquorice many moons ago? Email me at bbarrett@piquenewsmagazine.com.