A jewel of a summer fruit 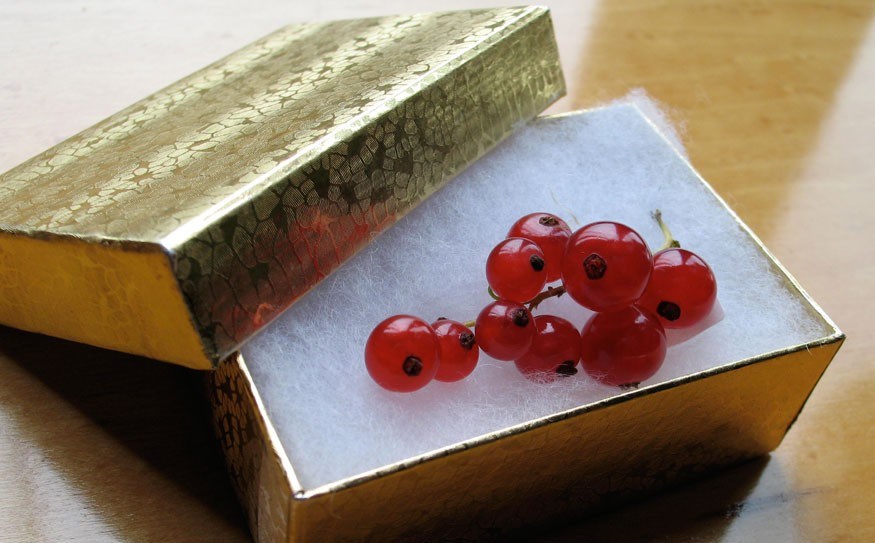 By her who in this month (January) is born
No gem save garnets should be worn...

Right on the edge of my granddad's jungle of a garden in Edmonton, as a kind of period to the rows of joyful gladiolas, tall and proud as sentries, and more rows of raspberry canes full of delicious rewards worth every wicked raspberry-thorn scratch etched into your skinny, sun-browned arms, was a big fat red currant bush.

Twice as tall as me by half, I remember standing in awe one summer evening as the setting sun lit up its tiny, brilliant red fruit that hangs like little grape clusters. This was right around the time I learned that garnets were my mom's birthstone: In one of those wonderful leaps of childhood imagination when reality is arbitrary, I was convinced these gorgeous things, sparkling against the dark green foliage like so many dangly earrings, had to be garnets.

To this day, the French consider a properly rendered (meaning not cloudy) red currant jelly to be as precious as jewels.

Here in Canada, few people are growing currants, not even farmers who sell at the markets, so it's a lucky day when you find some. On the other hand, at least 100 species of Grossulariaceae Ribes — Ribes genus also includes the gooseberry — grow wild in temperate regions of North America, especially the Rocky Mountains, as well as in South America.

In B.C. forests we can find stink currants, trailing black currants, sticky currants, black gooseberries and red-flowering currants — Ribes all, but none with the pizzazz of cultivated red currants (Ribes rubrum).

According to Encyclopaedia Britannica, we have the Dutch, the Danes and others living near the Baltic Sea to thank for our garden-grown varieties. They were cultivated and brought to North America by early settlers in the 1600s; no surprise, since they do well in cool northern climates and in clay or silt soils. Varieties native to North America were also cultivated for domestic use, so hard to say where that bush in my granddad's garden originated.

Red currants were widely grown by early pioneers throughout the prairies, given the kinds of conditions they could tolerate, as well as the fact that, like gooseberries and cranberries, they contain lots of natural pectin, making them easily rendered into jams and jellies before commercial pectin was invented. They're also high in Vitamin C, calcium, iron and other nutrients, making them especially welcome for good health during those trying northern winters.

Black currants, on the other hand, were and still are the big stars in Britain, which grows more currants than any other country. Black currant flavouring is used a lot in things like lozenges as well as one of those hallmarks of Britishness you can still enjoy, especially in "the colonies" such as Hong Kong — a tall cool glass of soda flavoured with Ribena syrup (Ribena from Ribes).

But to me, red currants remain as distinctively Canadian as our red-leafed flag, not least because no proud prairie housewife would go a summer without making perfect red currant jelly able to impress the most discerning French man or woman.

My nan was right up there with the best of them. After removing the stems, she'd gently simmer the currants in the scantest amount of water, meaning they were barely covered, until they were just cooked.

Then she'd rig up an impressive contraption, commonly found in Alberta basements, during August when the currants ripened. She'd place a clean white cotton sack, which sugar came in then, into the bottom of an enamel pan, then she'd carefully scoop the cooked currants and juice into the cotton sack, cup by cup, before tying it up with a piece of string.

Two wooden chairs were placed on either side of the enamel pan, then the sack full of juicy, cooked currants was tied up onto an old broomstick supported by the chairs so that bottom of the sack would clear the juices that seeped through.

After a day, all the red currant goodness had dripped into the enamel pan, staining the bottom of the bandage-white sack a bright red, something I always found wonderfully gory looking. The trick was to never ever succumb to the temptation to s-q-u-e-e-z-e the bag to get out more juice because you'd also release some of the dregs that would render it cloudy.

Each cup of the clear red currant juice was then matched with a cup of sugar and cooked to a perfect consistency for the most exquisite red currant jelly that looked and tasted as good on a peanut butter sandwich as it did with a succulent piece of roasted chicken breast.

I found a pint of red currants as gorgeous as a boxful of garnet earrings at the Kitsilano Farmers' Market last week. I knew I'd never go to the bother of my grandmother's painstaking jelly-making techniques, but I figured I could come up with something as delicious.

So I washed and stemmed the currants, which, after using some on yogurt-baked chicken and in some sweetened, cooked beets, probably yielded only a cup and a half. Then I cooked them whole in a small saucepan, and here's where I really took off from my nan's approach.

I used much less than the ratio of one-to-one for sugar. Rather than measuring, I tasted as I added, and in the end I bet I only used a ratio of about one part sugar to five parts currants. Part of the reason is that the currants were actually pretty sweet to start, and they sweetened even more as they sat in the fridge a few days.

Since I wanted what I was now calling my red currant compote to be as tasty on toast as it was on meat, I hovered between sweet and savory with my seasonings, adding a big clove of minced garlic; a pinch each of allspice, turmeric and salt; a couple of whole cloves and a dash of real cinnamon, which is much sweeter than most commercial "cinnamon" sold today.

I cooked it until I liked the consistency (keep in mind that fruits with a lot of natural pectin, like currants and cranberries, thicken quite a bit when they cool). The result? A delicious red currant spread that hovers between chutney and jam and stands up as beautifully on toast or yogurt as it does with grilled salmon or sausages.

The only drawback — and you might not even call it a drawback, although purists will — is that the wee seeds in the currants add a bit of texture and, of course, my compote is cloudy, not even remotely clear as a garnet. C'est la vie!

Glenda Bartosh is an award-winning journalist who would rather cook without a recipe than with.