A national treasure under siege 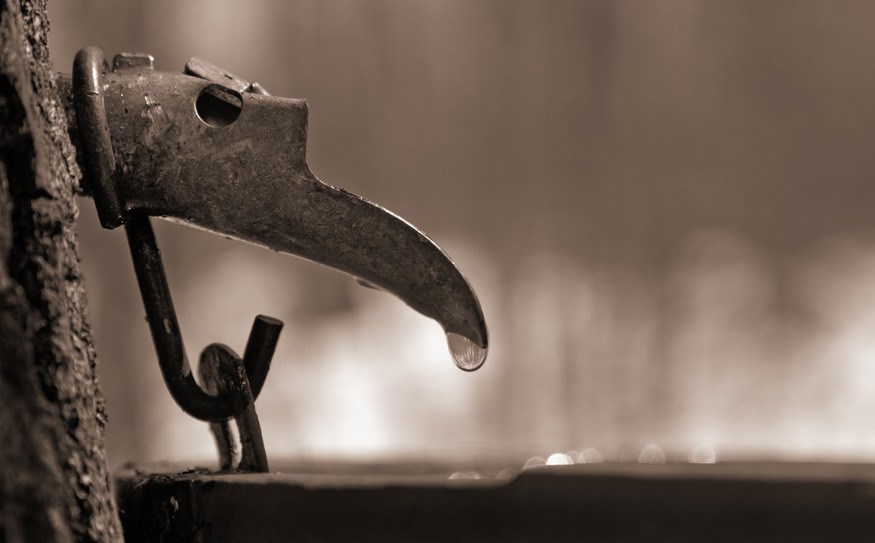 I could mainline maple syrup. Ever since I was a kid, I loved it so much I would hone in on it like a wasp at a barbecue if there was even a whiff of r-e-a-l maple syrup within a 50-km radius.

Albertans back then had a unique way of drawing out the adjective "real" that they invariably paired up with "maple syrup" like they were conjoined twins. The emphasis not only heightened the distance from those phony maple-flavoured imitators with ersatz flavouring in a fructose-corn syrup concoction, it also connoted values like rare, expensive — something proudly Canadian to be treasured and measured out of the tiny jug bottles that were carefully brought out from secret hiding places in the cupboard or fridge (the jury was still out on where it should be kept).

Today, Luc Bergeron's Canada No. 3 dark (foncé) organic maple syrup transforms my porridge, my pancakes, and my sinfully fatty organic yogurt. Gorgeous maple sugar transforms my equally sinful vanilla ice cream, along with a handle of toasted walnuts, organic, again, and straight from the orchards in Summerland. These are simple but heavenly treats for a woman who hates to spend time making desserts — treats only afforded by the luxury of real maple syrup.

So my graying eyebrows arched even higher the other day when I read that maple syrup producers in Quebec, who are responsible for three-quarters of the world's supply, are akimbo this spring over what some are calling disastrous; catastrophic; the worst maple syrup season in memory.

"Not since the 1940s has there been a year with such a strange transition in weather patterns from winter to spring. And this radical swing from cold to hot in a matter of days has played havoc with maple syrup production," says a report in the Haliburton Highlander, which circulates in central Ontario not far from Quebec, smack in the heart of Ontario's maple sugar country.

The Ontario Maple Syrup Producers Association predicts a multimillion-dollar loss for producers due to output that's down at least 50 per cent in parts of the province. Quebec's association of producers says it's too early yet to tell how their producers will be hit financially.

But everyone from industry spokespeople to the farmers who turn on the syrup taps on the trees lays the problem squarely at the feet of climate change. And they expect to see even more impacts in the future as maple tree ecosystems are stressed with drought, heat waves and other extremes.

In fact, eastern maple syrup producers, including those in New Brunswick and Nova Scotia, are worried that if a cold snap follows the recent heat wave, which caused the sap to flow too early, trees could be irrevocably damaged.

This kind of extreme weather back east — where hot days are making people turn up in shorts and Hawaiian shirts at maple syrup tastings where they used to huddle in parkas while the boiled syrup was poured over fresh snow — is occurring all over the world.

Canadians are famous for giggling that they love climate change. Previously known as global warming (warming temperatures around the world are only one aspect of climate change), I remember Canadians laughing and saying, global warming — bring it on, with visions of, yes, tropical shirts and shorts dancing in their heads.

Now many have stopped laughing as they witness the gravity of the situation — including how finely tuned, carefully balanced ecosystems are at stake, with our food supply systems at the top of the list.

The World Meteorological Organization released its annual report for 2011 a few weeks ago, and although world temperatures last year did not reach the record-setting highs of 2010, last year was the 11th warmest year on record since 1880, and the warmest year during which a major La Niña event occurred in the Pacific. And we West Coasters know that La Niña, especially a big one like last year's, always has a cooling effect.

More to the point, the WMO report calls 2011 a year of "climate extremes".

You don't have to tell that to the maple syrup producers. Nor to our farmers in Pemberton, impatient to get their seed in the ground as they wrestle with unseasonably cool, wet weather. Or to the wheat farmers in southern Alberta and Saskatchewan who, looking out over their tinder-dry bare fields that saw wildfires in January, are recalling the dust bowl of the "Dirty Thirties".

One of the most terrible "extremes" last year saw flooding in many parts of the world, especially Southeast Asia where one-third of Thailand was under water at one point. More than 20,000 sq km of agricultural land was damaged and millions of people impacted in that country's worst flooding ever.

Last spring, the U.S. saw 173 tornadoes in 24 hours — a new record according to the National Oceanic and Atmospheric Administration. And, like Thailand, the Mississippi River valley also saw extreme flooding on some of the most fertile farmland in America.

On top of extremes like these, more general changes in climate have experts around the world scrambling.

Scientists are warning corn farmers in the American Midwest that changing climatic patterns that will bring more rain could decrease crop production by up to 30 per cent. In the Middle East and Eurasia, they're witnessing the alarming spread of an unusually virulent variety of wheat rust out of Africa. Yes, horticulturalists can breed rust-resistant wheat, but on average it takes 12 years to do so. The rust's life cycle is months.

While food security is just one issue hooked into our changing climate, it's one that is so universal and palpable it makes me hopeful that policy makers and my fellow citizens alike might finally find the courage to face climate change — action scientists have been urging us to take for decades.

In eastern Canada, in one hopeful example, an innovative professor is using the maple syrup dilemma to develop an educational package for teachers to share with their classes about climate change.

In the meantime, as for storing that treasured maple syrup properly, you really should keep it in the fridge or even the freezer, no matter what Albertans do.

Glenda Bartosh is an award-winning freelance writer who sees the climate changing all around her.