A question of growth

I read somewhere that your garden is a reflection of your personality. My garden has gone off-script.
Sep 8, 2019 2:00 AM By: Lisa Richardson 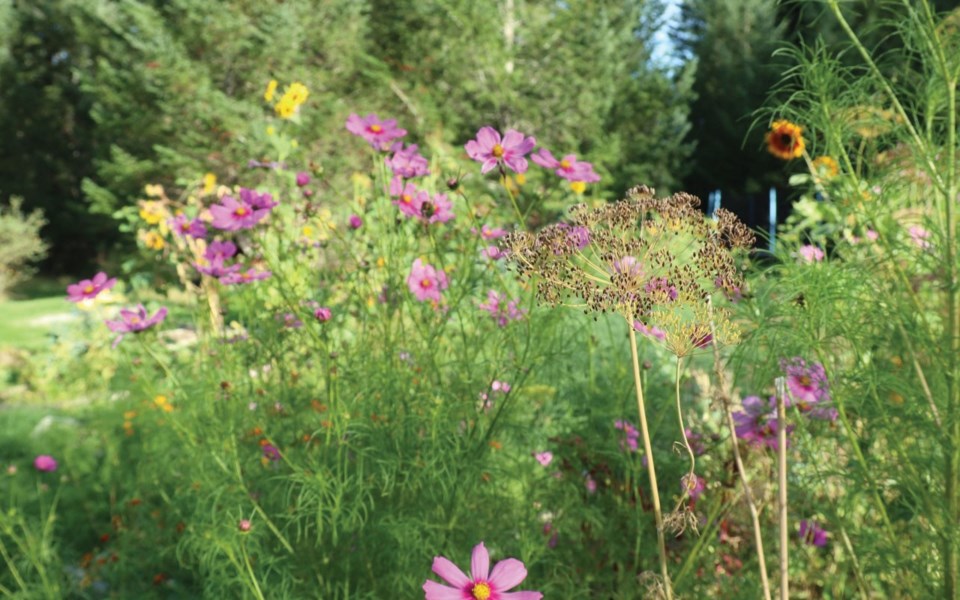 GROWTH GARDEN The middle of a messy fall garden is good place to remind yourself you're part of an ecosystem of relationships, balancing on the ever-turning wheel of the year, and that everything good will come around again. Photo by Lisa Richardson

I read somewhere that your garden is a reflection of your personality.

My garden has gone off-script.

It is wild, unkempt, rangy, not willing to commit to any one single thing beyond the belief that there are mysterious forces at play in the natural world to which I surrender control. It's utterly prolific and not in any way linear or orderly. It's an offering to pollinators. On any given day, there are so many different bees and wasps and butterflies and dragonflies that the air shimmers and vibrates. It's been full of weeds since I discovered some of those weeds (Hello purslane! Hello plantain herb!) are edible or medicinal, so opted to welcome them, taste them, invite their medicine in, instead of battling them. Battles are so rarely won.

Last season, and all the seasons before in which I've engaged in this yearly experiment, all I could see were the flaws, the lack of order, the ample evidence that if a pioneer-era family were depending on my skills, we'd all be dead, that my late grandmother would shake her head at how few life skills I have.

Today, with the cosmos, dill-weed and sunflowers towering over me, I am OK with this. I have realized that self-sufficiency isn't as worth cultivating as community is. And each year in the garden, I have learned that I am part of a community of pollinators; of birds; of earthworms; of black bears that I shoo away, but who still win their fair share; of beet-green-nibbling deer (*shakes fist at air*); of rats (*insert unpublishable curses and shudders*); of friends who gift seedlings and starts and neighbours with abundant fruit trees and a willingness to share. This ecosystem membership card comes with no assurances or written guarantees, and yet, I suspect I am more resilient in this club than if I had invested my loosely focused energy in a stockpile of canned goods, some guns, and a padlocked larder full of canned peaches.

My garden is wildly prolific right now. And in a few months, everything will be dead.

This is the way of the wheel of life. This is what is true, as much as I might like to push it away: every possibility grows out of an ending. And the endings keep coming around.

The other night, when racing-brain-syndrome pushed sleep away, I reached for a book of Mary Oliver poems. I turned on the light and read until my mind settled into the hammock of Oliver's words, and I slipped back to sleep with these lines resting on my chest:

"Every year we have been witness to it: how the world descends into a rich mash, in order that it may resume. And therefore who would cry out to the petals on the ground to stay, knowing as we must, how the vivacity of what was is married to the vitality of what will be? I don't say it's easy, but what else will do if the love one claims to have for the world be true?"

Growth has been the mantra of this diseased era, the Anthropocene. Globalized growth detached from place or relationship. Growth, unrestrained by upper limit or sense of limitation or restraint. Growth without end.

When Kate Raworth, the British economist and author of Doughnut Economics, remodeled the way we look at the economy, she drew, instead of a pyramid or a supply chain or a spreadsheet or the colonization of other planets, a doughnut.

The first thing she did was draw a big circle around the outside of the economy and say: this is the limit, defined by the Earth's life-supporting capacity. And here in the centre is a hole, and it represents everyone we're failing. The challenge is to live within the doughnut—the space between the limits of social justice and planetary systems.

When you trade growth-without-end for doughnuts and gardens and the wheel of the seasons, you have the courage to accept limits, to be still, to acknowledge endings and loss and the discomfort of never really nailing it. You also give yourself permission to start over, again and again, to risk it on relationships, to know the wealth of a table loaded with good food and air vibrating with bees, the difference between a larder and a hoard.

I pile clippings and weeds and garden detritus onto a bed, and prep another for next year's garlic, and steadfastly ignore those that are gone past the point of no return. I offer the birds free rein at the sunflowers. I collect coriander seeds that dried on the stalk when I let the cilantro go to flower, and the surfaces and corners of the house fill up with brown paper bags full of drying seed pods and flower heads—reminders that this will all come around again, and this full, lush, vivacious moment is a good time to think about what you will offer to ensure the vitality of what will be.