Nomad Nutrition makes organic, locally sourced meals in a bag for your next outdoor trek
Jul 19, 2017 6:00 PM By: Brandon Barrett 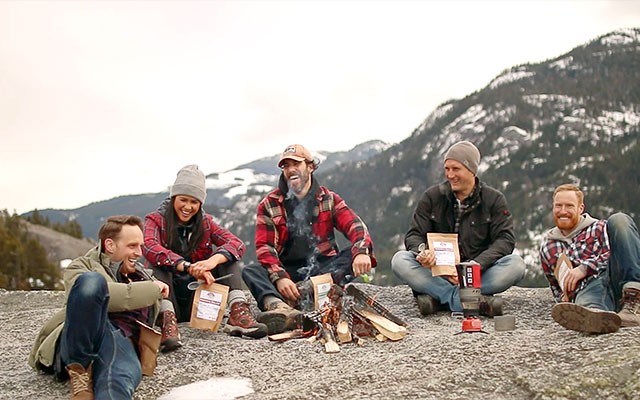 Denis Mikhailov loves ham sandwiches, just as long "as they don't have any ham or sandwich in them."

It's a personal preference built up over years of trekking into the remote wilderness of B.C. and seeing the lack of tasty, nutritional meal options available to his fellow outdoor adventurers.

"What I noticed were all these people would train super hard in the city, with lots of dollars and a careful amount of planning to keep their body in tip-top shape, but as soon as they got to the backcountry, it's just a downward spiral of bad nutrition and ham sandwiches," Mikhailov said. The founder of Nomad Nutrition, a Vancouver start-up making pre-packaged, dehydrated "trek meals," Mikhailov had his lightning-strike moment on one particular trek to the gruelling Bugaboos mountain range in eastern B.C. Not wanting to join the ham-sandwich brigade, Mikhailov loaded up on dehydrated food, but soon learned the bland, nutrient-poor meals weren't exactly the breakfast of champions he was looking for.

"Those meals just didn't do any favours for me in terms of my digestive tract. I was basically suffering," he recalled. Then, in a moment some might chalk up to fate, Mikhailov happened upon a mountain guide who was leaving the area early due to bad weather. She had some of her homemade, dehydrated shepherd's pie left over, and Mikhailov jumped at the chance to put something in his body that didn't taste and feel like eating nuclear sludge.

"I started cooking this food and the smell coming out of it was just overpowering," he said. "People from around the camp started gathering around. They were lifting the pot, asking what was in there."

That experience inspired the admitted tech geek to hit the books, scouring academic journals and the far corners of the internet for the best recipes and methods of dehydrating food.

Less than a year later, and Mikhailov came up with a line of gourmet meals in a bag — Hungarian Goulash, Kathmandu Curry, Irish Shepherd's Pie and Indian Red Lentil Stew round out the menu — made from organic, local, GMO-free ingredients that only take minutes to prepare.

"Whenever I hear the word dehydrated, I, like everybody else, think space food. And that is exactly the uphill battle we're trying to fight," he noted. "We are redefining what you think about dehydrated food."

Nomad Nutrition is also helping to redefine how manufacturers dehydrate their food. As Mikhailov explained, the most common dehydration method is freeze drying, which tends to suck the nutritional value out of food. But the entrepreneur landed on a lesser-known method that was devised by a UBC professor called radiant energy vacuum dehydration, or REV drying.

Now, I'll spare you too much scientific jargon outlining this particular method, but essentially the patented technology combines microwave energy with vacuum pressure to control a liquid's boiling and evaporation points. Unlike the expensive, time-consuming method of freeze-drying, REV drying preserves the colour, flavour, texture and nutrients of ingredients, resulting in a tastier, healthier meal.

So far, Mikhailov has used a standard dehydrator like you'd find at Costco on his meals. But, through a Kickstarter campaign launching Aug. 1, he plans to relaunch his line of organic products made with the REV drying technique.

"We wanted to test the market first to see whether people would like the meals. They like the recipes and now we can really give them something they can love," Mikhailov said.

"The reasons we're making in-roads with the local athletic community is that we listen, so whatever they need we will try to provide for," Mikhailov said. "The predominant echo that I've heard when I was starting out asking people and athletes I know was: 'Hey, we just want clean food, we don't want any preservatives or chemicals, we want organic and we're willing to pay for it, just give us the best you can." Nomad Nutrition's products are available online at www.nomadnutrition.co or at Climb On Equipment in Squamish.