Taking cues from the library on how to manage dizzying growth.
Feb 7, 2018 5:00 PM By: Lisa Richardson 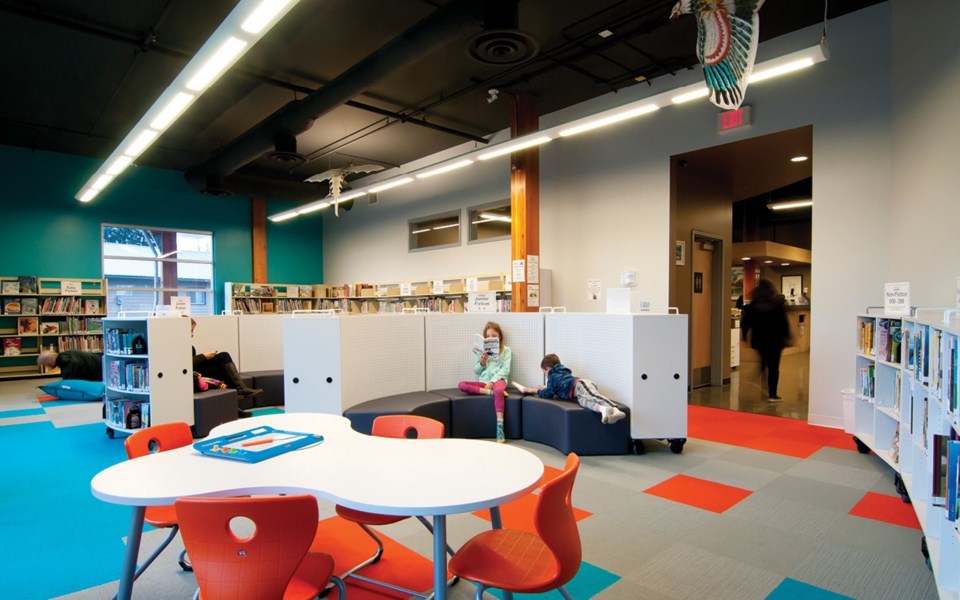 GROWTH SPURT Redesigning the children's area of the Pemberton and District Library is just part of how the area is dealing with its incredible growth. Photo courtesy of Emma Gillis, Pemberton Library

There's a little white board in the corner of Emma Gillis' office, with a wish list scrawled down it in black marker. Most of the items have been steadily crossed off over the five years since Gillis took the helm of the Pemberton and District Public Library and tried to conjure a future-proof facility.

But phenomenal growth is what she's been tracking, and she is now poised to respond to the surging use with a proposed redesign of the main library (the children's area was redesigned in 2016). The proposed space hacks — movable stacks to increase capacity for programs, smaller furniture to ensure more available seating, more study carols, free-standing staff stations that will free up the current front office to become a computer and business station for patrons — have been conceived to squeeze every spare centimetre of functionality out of the library's space, because moving the walls is not an option.

"We are bursting at the seams," said Gillis. "When we moved here in 2008, the library doubled in size from 0.36 square foot per person, to 0.72. We're now sitting at 0.63, so we're already losing space per person. With all the new developments coming to town, if our busyness continues to increase with the population, how do we cater for all the different reasons people come in here?"

Spoiler: it's not just for books.

The library is the unofficial pulse-taker of Pemberton. Staff sees the number of kids hanging about after school unsupervised — testament to the lack of after-school care options. They see the number of people enjoying a quiet place to read as an indicator of crowded accommodation. They see the demand for Wi-Fi as a reminder that Pemberton has hit its capacity in internet accounts. They see surging loans in DVDs because they're the only place in town where a person can borrow a movie. They see capacity turn outs to children's film screenings and one-woman theatre shows, because there is a dearth of affordable cultural entertainment offerings.

The team is constantly brainstorming ways to respond and stay relevant — lendable board games, free Maker Mondays after-school sessions, coding classes, book-a-librarian technology consults, informal book return arrangements with the Whistler and Squamish libraries in recognition of the number of people who live in one community but work in another.

The library is tracking needs, and responding to them.

And maybe that's why the library is leading the way in adapting to change in a community that seems to be caught up in a fast-moving whirlpool.

Thomas Friedman wrote about this in his book (which I borrowed from the library, naturally), Thank You For Being Late. He said we are all living in a dizzying period of accelerations — the combined pace of change in climate, computing technology and the globalization of market, has left us literally incapable of assimilating and digesting that change. The rate of change has outpaced our ability to adapt, leaving us dislocated and angsty. But things aren't going to slow down. So, we need to upgrade our own adaptablity. We need to optimize for learning.

What better resource to future-proof our lives, than a library that is always thinking ahead?

A two-phased redesign will optimize the space. Thanks to a carefully earmarked stash of funds raised at three wine and cheese events, and a matching grant from the Whistler Blackcomb Foundation, the first phase's $80,000 budget is secured.

The board will host an Oktoberfest beer hall on Oct. 13 to raise funds for the second $70,000 phase, and is asking the community to pitch in. If every library user donated $5 to the campaign, they'd have the money they need to make phase two happen, immediately.

"The time of static stability has passed us by," wrote Friedman. "The new kind of stability has to be dynamic stability — like riding a bicycle, where you cannot stand still, but once you are moving it is actually easier."

Friedman said we need to train ourselves and our children to "learn the bicycle trick" and become comfortable with dynamic stability.

I return to this statement every time my head starts to spin, or my blood pressure surges while commuting the highway between Pemberton and Whistler, or when the topic of "where else could we live" rears up. No place on this planet is immune from globalization, Moore's law, and climate change. Better to stay among people who are experts at riding bikes and who know that the library is the perfect lifeboat. I'll double down on right here and invest my five bucks in a future-proof library. It's the perfect hedge.