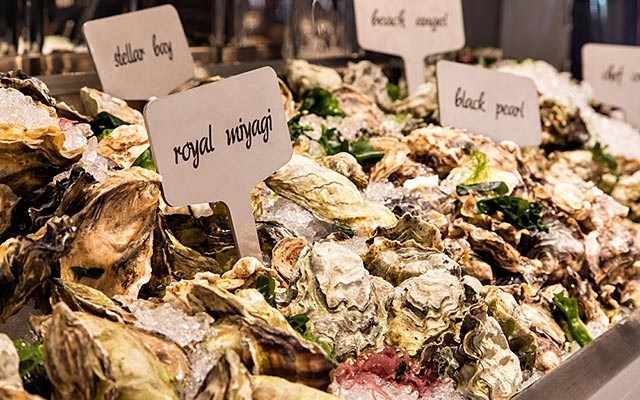 The sun is slipping lower at the end of an epic day on the mountain and as Metal Dome and Mount Fee eat up the final rays of sunshine splashing across the western horizon, the après call can be heard loud and clear throughout Whistler.

Thirst and hunger push skiers and snowboarders to find food and drink. Lunch was a few hours ago; dinner is still a few hours off. This is the perfect time for oysters.

Araxi Restaurant + Bar gets this and it has responded by opening a new oyster bar.

The bar, across from the restaurant's front entry, features the classic marble countertop where the raw bar was located. Between 3 and 5 p.m. Patrick Cantin-Gayton and James Timms will prepare a platter of freshly shucked oysters at a price of 15 clams. While oysters taste great after a day of sliding in the mountains they (also taste great) through the rest of the evening, so the oyster bar at Araxi operates through to midnight with more than a dozen oyster varieties available.

At opening time on a Monday, Cantin-Gayton takes a few minutes to discuss the oyster world. Through the summer months he says an average of 50 dozen oysters were being served a day, with a single-day summer record of 98 dozen. On Saturday, Dec. 7 Cantin-Gayton and Tims served up 108 dozen oysters over the course of the day to kick off the winter season and the debut of the new oyster bar.

For a guy from Montreal, Cantin-Gayton's West Coast oyster knowledge is remarkable. He explains that the majority of the oysters he and his oyster partner from Nova Scotia serve come from B.C. oyster farms. A few of the oysters come from Washington State. The varieties available range in size and they offer different shell colours.

"The small oysters are sweeter," says Cantin-Gayton pointing out the significant difference in size on the shells neatly arranged over crushed ice, garnished with horseradish.

Small Black Pearl oysters mature in seven to nine months and the larger oysters like the Royal Miyagi and Chef's Creek take up to two years to mature. The smaller oysters do taste sweeter and it's realized late, well back on the tongue.

The colour and texture of the oyster shell is influenced by where the oyster came from and how it was grown. "Every bay will give you a different oyster," Cantin-Gayton says.

Oysters are grown on beaches, in pouches and suspended from rafts.

As he explains, Cantin-Gayton knocks back an oyster as part of the quality control process while putting together a platter for two customers fresh off the mountains perched under the outdoor heaters beside the restaurant's front door. The oyster shuckers taste oysters from each batch, he says.

"The general taste will stay the same," he says of oysters from the same batch.

Oysters of different varieties, though, can offer quite a different experience.

Cantin-Gayton puts the finishing touches on the order for his customers. The skiers dive into the oysters — a ray of culinary sunshine on a cloudy Whistler day.