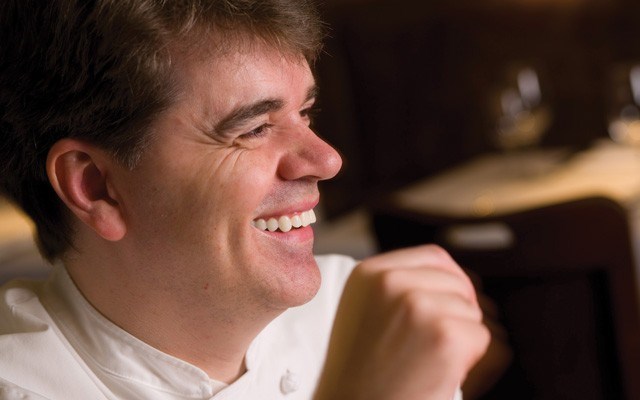 BEST OF THE BEST Despite a slew of industry accolades, including another Gold at the 2014 Vancouver Magazine Restaurant Awards, Araxi Executive Chef James Walt is not content with resting on his laurels. Photo by James Herlock

Another year, another accolade for Whistler's longest-running fine dining restaurant, Araxi, which took home Gold in the Best of Whistler category at the Vancouver Magazine Restaurant Awards last week.

A panel of judges, made up of restaurant industry experts, writers, food critics and bloggers, highlighted long-time executive chef and 100-mile diet champion James Walt's continued evolution in the kitchen as one of the factors playing into their decision.

"(Walt) has branched out of late," it reads. "Peruvian chilies in particular have brought welcome complexity to his farm-to-table oeuvre. His elk tartare, tossed with citrusy amarillo and smoky panca chilies, is one of his brightest dishes ever."

And despite earning an astounding 14th Gold Award, and fifth in a row, Walt and his team of chefs are not content with merely resting on their laurels.

"We always keep trying, that's the good thing about working here: We never sit still and we're always pushing ourselves," Walt says. "Whether it's new products in the restaurant, new wines being brought in, different table service procedures or how we cater to the guest, we just keep going and I think that's been part of our success."

Walt, who has sported the Araxi chef coat since 1997, was an early pioneer of farm-to-table cooking — long before the locavore movement took hold in our current food-obsessed culture. He credits an 18-month trip to Italy a decade ago for reinvigorating his passion for locally sourced cuisine.

"I'd always come up respecting farm-to-table cuisine from when I started my career, and once I went to Italy it really reinforced that because they eat so regionally and it's all about what's around you," he said. "So when I came back that was goal No. 1. I really wanted to take it to another level."

Bearfoot Bistro, another pillar of the resort's fine dining scene, took home the Silver at the awards, as has been the case every year dating back to 2009, when the elegant eatery nabbed a rare win in the Whistler category. While Araxi and Bearfoot have come one–two as far back as Vancouver Magazine maintains online records, Walt doesn't feel like the resort's pair of premier establishments are lacking in competitors.

"I think it's more that these are two restaurants doing quite well and trying their best," Walt said. "Each year, you see it: There are a lot of great places (in Whistler) with Sidecut, Alta Bistro, Rimrock then you have all the other guys popping up, so I think, for a small town, the amount of restaurants we have is great."

Ever the diplomat, Walt said there's no rivalry between two of Whistler's most iconic eateries in spite of both establishments going head-to-head each year in a number of culinary awards ceremonies, and he has been friends with Bearfoot Executive Chef Melissa Craig for years from their time working at Vancouver Island's Sooke Harbour House.

"I've never really viewed it (as a rivalry)," Walt says. "Restaurants are always in competition, you want to maintain a market share, and it's a business at the end of the day, but I've never really felt that way at all."

Bearfoot Bistro couldn't be reached for comment by deadline.

Rounding out the magazine's awards, Sidecut won a Bronze in the Whistler category, with Mexican Corner and Alta Bistro earning honourable mentions.