Backcountry Brewing is the new kid on the craft-beer block 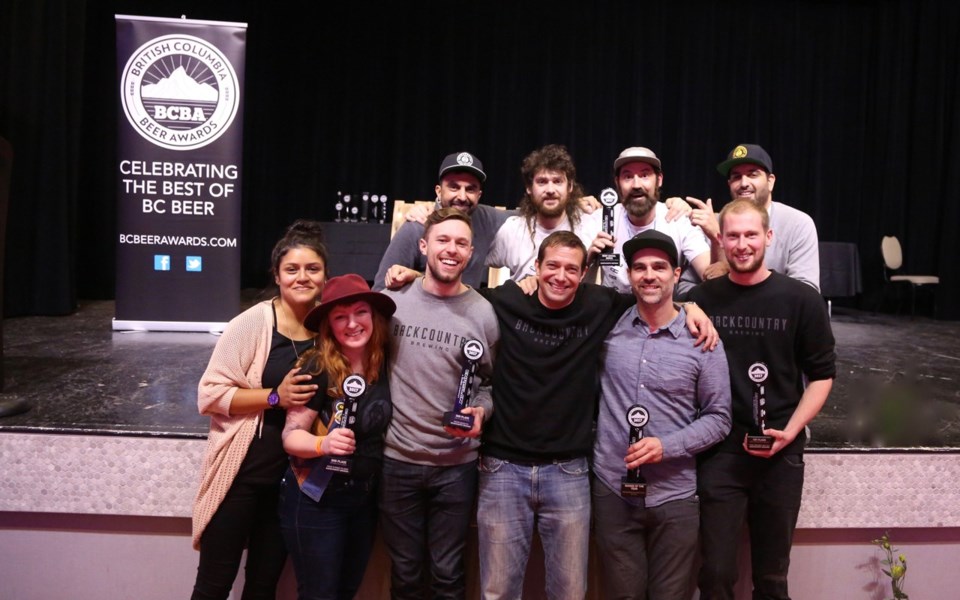 best of the backcountry The Backcountry Brewing team shows off the hardware at this year's BC Beer Awards. PHOTO submitted

There's a new kid in the Sea to Sky's craft-beer scene, and the industry has taken note. Squamish's Backcountry Brewing was the big winner at last month's BC Beer Awards, earning five medals in a number of hotly contested categories — despite only opening its doors in April.

"We're really honoured to be recognized amongst so many other great breweries. It was definitely an awesome surprise," said brewery co-founder, GM, and director of sales Marc Roberts ("I also wash dishes!").

The fine folks at Backcountry Brewing had their work cut out for them this year at the biggest BC Beer Awards yet, with almost 100 other breweries and 900 beers to contend with.

Along with taking home the hardware for Best Social Media in the new Creative Awards category, Backcountry was named Rookie of the Year as B.C.'s consensus best-new brewery.

It was an astounding showing for a microbrewery that has only been in operation for a little over six months, one that Roberts chalked up to his team's experience and their penchant for taking risks most other new breweries wouldn't dare.

"Going into this having an experienced brewer really helped us hit the ground running," said Roberts of head brewer and co-owner Jon Folinsbee, formerly of Steamworks Brewing. "Then, I think just doing styles that aren't typically what new breweries do. Like coming out with an East-Coast IPA on the West Coast is a little bit different. It's a different approach to a lot of the standard styles you see. I think we're a bit progressive."

With a healthy mix of long-time players like Whistler Brewing and Howe Sound Brewing, and emerging newcomers, such as Backcountry, Coast Mountain Brewing and A-Frame Brewing, the Sea to Sky's craft-beer scene has likely never been in a better place. Roberts believes it's the youthful, adventurous spirit of the corridor that has made it into an unlikely hub for high-quality, unique beers.

"(This generation) doesn't want to drink our parents' beer anymore. So we're going out skiing and snowboarding in the backcountry, which I think is a transition in lifestyle that reflects the beer styles and food styles that are (popular) right now as well," he said.

Also at the BC Beer Awards, which were held in Vancouver on Oct. 21, Squamish's Howe Sound Brewery earned a trio of medals: a gold in the Strong Beer category for its Wooly Bugger barley-wine beer; a silver in the Specialty Fruit Beer category for its Megadestroyer Imperial Licorice Stout; and a bronze in the North American Pale Ale category for its Sky Pilot Northwest Pale Ale.

To learn more about Backcountry Brewing, check out their taproom in Squamish or head over to backcountrybrewing.com.