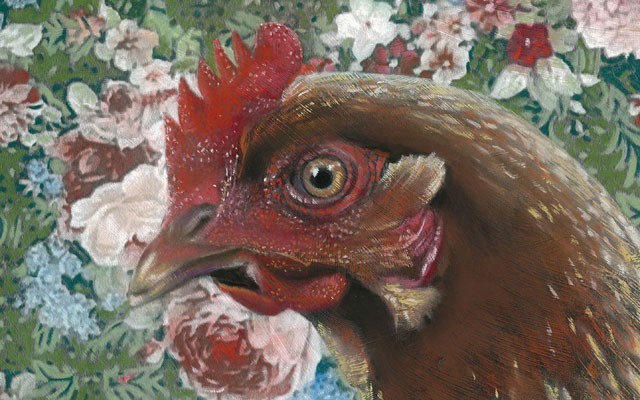 They're here, there and everywhere — and yet we barely consider them.

As amazing as they are common, chickens are pretty much taken for granted, with two exceptions: Chicken lovers, who are raising them in farmyards and backyards more than ever; and Easter time, when eggs and fluffy little chicks are everywhere, classic symbols of spring and renewal since time immemorial.

From plump breasts carefully laid out in glossy black trays and cinched up in plastic wrap, to platters of hot wings populating every pub night and buckets of finger-lickin' goodness, chickens are everywhere.

In Britain, they eat more than two million chickens a day. In Canada, on average, we each eat 36.5 kg of chicken a year. In the U.S. that number is just over 50 kg, totalling some 13 million tonnes annually — about the same amount consumed in China. Everywhere, the trends are on the upswing as chicken, with its great flavour and increasingly industrialized production, climbs to the top of the popularity charts.

On the other hand, chickens are important enough to have earned a place in Eric Chaline's Fifty Animals that Changed the Course of History — alongside Darwin's finches and homo sapiens themselves — and intriguing enough to be honoured in art over centuries.

Chagall's Self-Portrait shows a chicken perched prominently on his head with a woman of equal size. Charles Jacque, who was part of the Barbizon school and known for his animal paintings, started his art career with chickens, which he raised. His golden Une Basse-cour (a basse-cour is a farmyard or backyard) is a noble portrait of hens and a rooster, likely done from his own backyard.

By contrast, Douglas Argue's untitled painting of 1994 shows rows and rows of factory-farmed chickens stacked high in cages that resemble more of a prison brick wall, with a disgusting yellowish trickle making its way to the drains. At 12 x 18 feet (3.6 x 5.5 metres), it may be the largest painting of chickens in history.

Then we have the famous jewel-encrusted Faberge eggs, commissioned by Nicholas II from the House of Faberge in Saint Petersburg. Last spring, a Faberge egg bought at a flea market for US$14,000 was valued at US$33 million.

My own friend, Diana Durrand (wife of Craig Spence, of former Whistler Question fame) has just launched her own exhibition, Gallus Domesticus — We are the Keepers at Gage Gallery in Victoria. There, like Vancouver and, recently, the District of Squamish, you can raise chickens in your backyard.

The show features 16 beautiful collaged, mixed media portraits of chickens that echo traditional portraiture of royalty and the upper classes. The backdrops are carefully chosen wallpaper, which as something man-made speaks to the man-made environments chickens have to live in. Interspersed are life-sized sculptures of chickens Diana created out of fuzzy wool fibre then dipped in plastic to create a metallic effect.

You'll also find golden eggs and black ones in configurations the same as eggs you buy in the grocery store. These contain little fortune-cookie-type messages about chickens. The black eggs contain "the bad news". (To learn more about the dark side of our chicken-eating ways, check out CTV's recent W5 show, For the Birds.)

The golden eggs contain facts about how amazing chickens are. And they are amazing.

For instance, did you know that if chickens don't get enough calcium in their diets, they draw it from their own bones and get osteoporosis? In Cretaceous times, they lived side by side with dinosaurs and flying pterosaurs. As for that southern fried chicken we love, it originated from African-American slave cooking.

For Diana, one of her watershed moments with chickens occurred when a farming neighbour in England invited her to gather eggs in his backyard, where the chickens ran free.

"The eggs were under trees and all over the place, and when I picked them up they were warm," she says, emphasizing "w-a-r-m."

"...You're used to getting them in the fridge, all nice and clean and cold. So that was a bit of a shock..."

Her whole point is to heighten our appreciation of chickens and their beauty, and remind us we are, indeed, the keepers of Gallus Domesticus in all their wonderment and, in too many instances, their despair.

Seems a lot of people are working on a chicken rethink these days. By coincidence, the notice of Diana's show landed the same time as an email from New Scientist featuring an article by molecular biologist Olivier Hanotte inviting us to "imagine a world without chickens."

"Each year we gobble down almost 100 million tonnes of chicken meat and 1 trillion eggs. So how would humanity cope if the world's 22 billion chickens succumbed to bird flu?" goes the teaser.

"It would mean no more fried wings, meringues or pastry and, more alarmingly, would knock out the main way of producing flu vaccines. Amid the pandemics and riots, malnutrition rates and global warming could soar..."

If all beef cattle died suddenly, America, Argentina and Australia would be in economic crises. But if all chickens died suddenly, we'd face "a starving world," says Hanotte, who's based at the University of Nottingham and got interested in chickens while studying the second domestication of cattle in Africa.

Close to one-third of the world's meat supply and nearly all of its eggs would vanish, says Hanotte. Pandemics and riots could follow, unleashing "a crisis of enormous proportions."

Safe to say, we all hope things will never turn out that way.

In the meantime, we're seeing a bit of a chicken renaissance. In Squamish, a new bylaw allowing chickens in the district, provided you have a licence, initially got some people squawking, although things seem to have settled peaceably. At Pemberton, a flurry of chicken power has surged, with lots of people getting them beyond the traditional farms.

As for Whistler, the RMOW surprisingly contains two huge rural zones — one RR1 (Rural Resource One), the other RR4 (Rural Resource Four) — on the outskirts of the municipality. Both allow for agriculture, and chickens could be a point of discussion, as they are in so many other regards right now.

So have a delicious egg this Easter, and consider how it got to you. Somewhere, at the other end, lies a noble chicken.

Glenda Bartosh is an award-winning journalist who gathered her first chicken eggs at age nine on her uncle's farm in Peace River.