Once, when I was really under pressure, blocked by my own ambition, I plagiarized. I stole an entire paragraph of someone else's writing and offered it up as my own. The story ran in the newspaper. I was sent a cheque. And cashed it.
Jun 27, 2018 6:00 PM By: Lisa Richardson 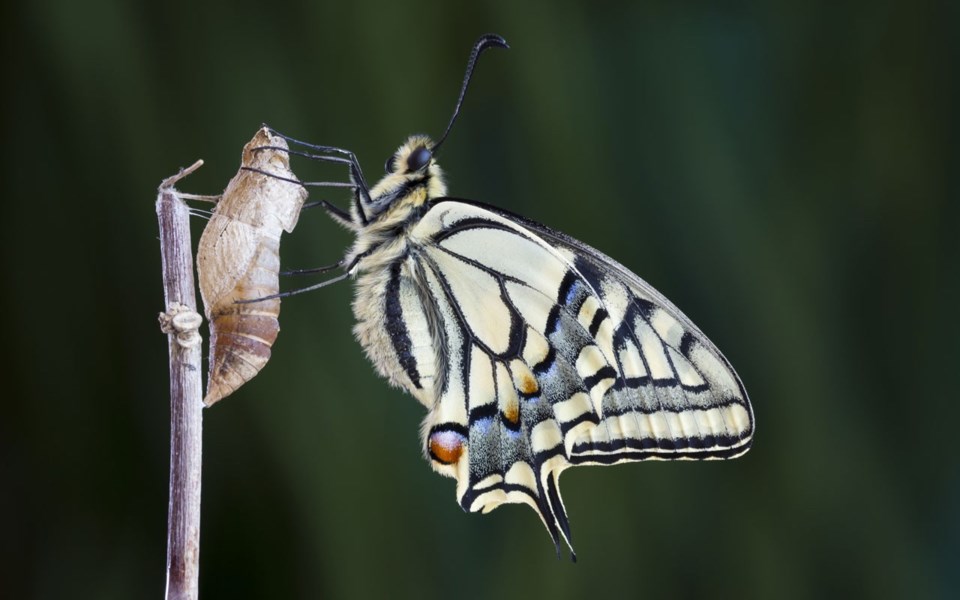 becoming a butterfly The caterpillar must do something quite violent and physically gruelling to bust out of its cocoon. www.shutterstock.com

Once, when I was really under pressure, blocked by my own ambition, I plagiarized. I stole an entire paragraph of someone else's writing and offered it up as my own. The story ran in the newspaper. I was sent a cheque. And cashed it. No one ever found out. Except my mother, who was suspicious of my use of the word "cataract," knowing full well that I'd never even seen a waterfall, and who skimmed through a series of books on my shelf until she found the offending paragraph and pointed it wordlessly out to me, as my entire body burned with shame. I was nine years old. I'd wanted to be smart and flawless and published. But I hadn't wanted to feel like that. My sense of my self as a creator was broken. I was a cheat.

Why is it, that in the worst experiences are the seeds of our best selves?

Why is the baby so hell-bent on knocking down the tower of blocks, undoing the puzzle, throwing the spoon to the floor, as I try to show him the joy of making and creating and building. He doesn't seem capable of even grasping the concept of construction until he has broken and knocked down things a thousand times.

Why does the vandal see a train carriage or a freshly painted wall and want to scribble their name or a giant set of testes on it? Why would you see a letterbox and want to hit it with a bat? Why see a bus shelter and want to kick the glass in?

Why does the ordinary citizen see a Trump or a Ford on the ballot paper and seriously check their name?

Maybe the vandal echoes the baby, and has an instinct—an honest instinct—to make their mark. To test out the most basic cause and effect. To verify if they are actually part of this world, or just spectators in it.

Maybe the voter has an instinct to tear down institutions that are full of regulation and hypocrisy and special passes for the privileged, that have felt like huge weights upon them.

Maybe they just haven't worked out how to break things theoretically, how to pull them apart in your mind, so you can then treat the pieces or the blankness as canvass. Maybe they just need to see the wreckage first, before feeling the blank slate, the permission to create an alternative path?

Move fast and break things, was Mark Zuckerberg's famous mantra, the adage of the ultimate disruptor of the status quo. I always thought that showed a certain cavalier arrogance. But I think it hints at something profound and primal ... To make anything, something must first be broken—an old way of looking at things, of doing things, of thinking. Old rules and paradigms.

The breaks, they're hard. But they make space.

That's why I've suspected my spirit animal might not be anything as magnificent as a bear, a lion, a dolphin, but a caterpillar. Because the journey for that caterpillar to make, to become a butterfly? That is radical transformation.

I still resist. I still try and nurture wholeness. The egg seems so perfect as it is. But nothing happens unless it breaks—neither breakfast, nor a chicken.

And the voice that says to the caterpillar: what makes you possibly think that you could become a butterfly? You, a little legless slug. Become that? Light winged fairy-like creature that sips delicately on nectar. What audacity.

Yes, admits the caterpillar. It does seem utterly improbably. But, you know, I just have this feeling, that there's something inside me. Bursting to get out.

Hahahahaha. Yeah. A butterfly. You lunatic.

But to get out, the caterpillar must do something quite violent and physically gruelling. He doesn't just go to sleep in that cocoon and wake up transformed, like some fairytale princess just waiting for a kiss.

No. He has to literally split his old self apart at the seams, and wriggle his way out, and when he emerges, he has to pump his life blood as quickly and urgently as possible from his heart into the wet crumpled papery wings scrunched at his back, and pump life into them, so they can unfurl and dry. He has to pour his energy into wingedness. And then, spread them out. And it doesn't happen effortlessly. They don't just unfurl.

You have to reach and stretch and work at it.

Intent on wingedness, surrounded by the hecklers, the vandals, the improbable leaders, bent on breaking as much of the world around us as they can, it sometimes seems delusional to believe we can make things better, but you only have to look to the cocoon clinging to the underside of a leaf to be reminded of our inbuilt capacity for radical transformation.