Can I develop a gratitude attitude and maintain my edge?

I was invited to start a gratitude practice—by someone I admire immensely, an unlikely pusher of positive psychology. I had resistance to the idea. To the very phrase, actually, and its ubiquity.
Nov 28, 2018 5:00 PM By: Lisa Richardson 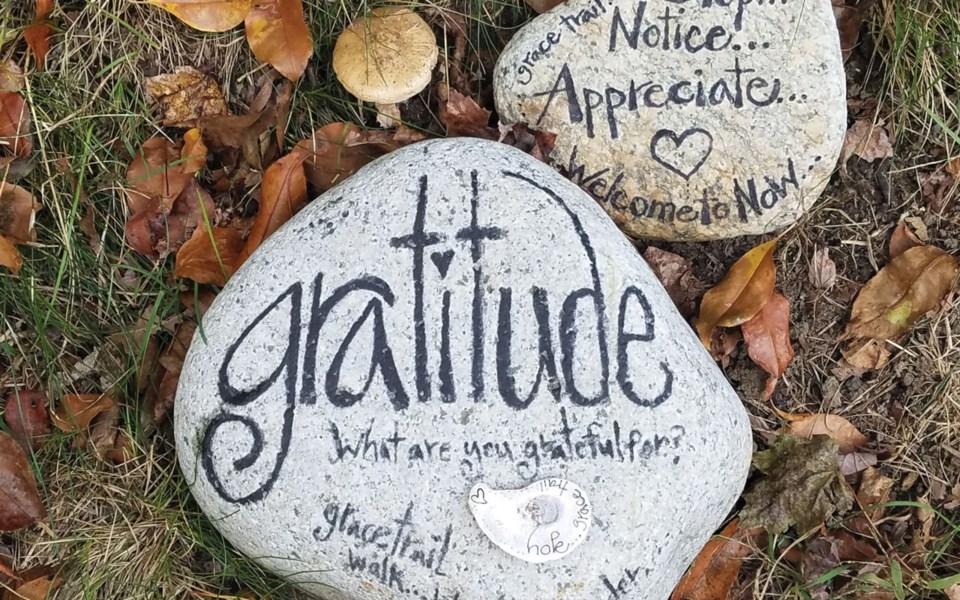 I was invited to start a gratitude practice—by someone I admire immensely, an unlikely pusher of positive psychology.

I had resistance to the idea. To the very phrase, actually, and its ubiquity.

Despite my squinty-eyed reaction, I agreed to participate in a daily gratitude experiment. Two days in, I was already feeling a shift—an opening towards the idea, accompanied by a slight twist of my head in the way I looked at the world.

I started noticing my blessings and wrapping them in words, instead of just letting them slip by like strangers in a crowd. In some kind of Law of Attraction fashion, once I attuned my radar for things I feel grateful for, I began to see them everywhere, as if I were attracting them into my field of consciousness. Big revelation: it was a pathway to slowing down! I was gathering testimony from two dozen friends about how a gratitude practice unfolds for them.

Just as I was getting worried that I had been brain-sucked by a Woo-Woo-infected zombie, Susan Reifer stepped in, to ground all my buzzy good vibes in some hard science.

Reifer is a Whistler-area writer and an A-list international ski journalist, who has been practicing meditation since she graduated from school, 30 years ago. She's also a certified yoga teacher. This year, she has offered two meditation classes in partnership with the Whistler Public Library each month—a two-hour Introduction to Meditation and a 45-minute guided meditation session, both of which have been attracting near-sell-out registration, from a wildly diverse range of attendees, each month. I'd taken her Introduction to Meditation session earlier in the year, and as I sat in the low-lit yoga studio while Reifer radiated knowledge and conviction I wished there were some way I could fast-track my way to Peak Zen, because, though obviously beneficial, Sitting. Is. So. Hard.

Now, with this baby-steps gratitude practice, I think I've found my point of entry.

And thanks to Reifer, I understand why.

"This is not voodoo," Reifer told me, firmly, when I inquired about the legitimacy of a gratitude practice. "This has been measured by scientists in labs."

It is possible we have evolved this way—survival instinct hardwired into our brains, so we don't overlook the potentially fatal bad stuff. But depression can also become wired in, we can get stuck in the rut of our darker stories. "It's been shown that people who experience one major depressive episode are much more likely to experience subsequent depressive episodes," says Reifer. "Part of the reason is that this synaptic connection between the neurons of the brain has been laid, like a shortcut in the woods."

Gratitude has the ability to influence your neural machinery, and, in the process, to generate higher flows of feel-good neurotransmitters, like dopamine and norepinephrine. "So, if we could take a few minutes of our lives to actually sit in the driver's seat and direct the flow of what's happening in our brain, we have the capacity to build greater resilience and a greater positivity bias into our brain."

No surgery necessary! This mind-altering awesomeness can be accomplished through some very simple, but profound practices.

Entry-level gratitude practice is what I've embarked on: a basic daily gratitude check-in. Naming the simple but specific blessings of one's life is something Reifer refers to as "elemental gratitude."

We can ninja-up from there.

Increasingly, over her years of practicing meditation, Reifer has come to appreciate the power of "present-moment awareness."

If you can hold onto that experience, as if you're angling a spotlight onto it, with your five senses playing for keeps, for between 10 and 30 seconds, your brain can start to develop new synaptic connections between its neurons—and shift a negativity bias to a positivity bias.

But don't fake it, says Reifer.

"The idea is not to be a Pollyanna and create long lists that feel false or insincere or to try and force yourself to be grateful for things that are unpleasant or painful, or try to override reality."

Gratitude is not meant to be a power tool for denial to shut down genuine grief, discomfort, or concern. It's not meant to be an act of self-aggression. "Rather," says Reifer, "it's a practice of focusing, for a few minutes a day, on finding things, noticing things, for which one can naturally experience a feeling of warmth and welcome. And that little tiny act has been shown by a whole range of different kinds of research to have benefits on physical health, to have benefits on psychological health, to improve empathy and reduce aggression, improve sleep, improve self-esteem, improve mental agility and strength."

It's a cumulative practice of accrual, says Reifer, which means, more, better. Brain sculpting in baby-steps.

Sounds too good to be true? I say: Too good not to try. With friends, even better.

Registration for Susan Reifer's free meditation classes open on the first of each month. Information and dates are posted at whistlerlibrary.ca under the Adults Events tab. You can also follow @susanreifer on Instagram for reminders about forthcoming classes.