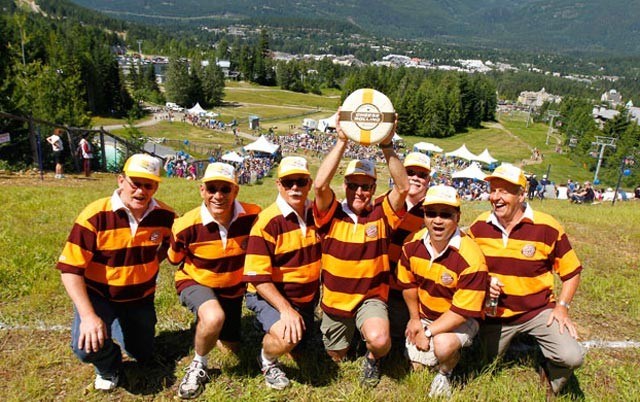 Cheese will roll this weekend at the base of Blackcomb Mountain.

And the burning question heading into the fifth annual Canadian Cheese Rolling Festival in Whistler is a simple one: Is the cheese that rolls down the hill the real deal or just a prop?

"It's real cheese," says Solange Heiss of the Dairy Farmers of Canada from her office in Montreal.

"It's real cheese and the reason we have that cheese, specifically, is because it's made on Vancouver Island by Natural Pastures and he is the only one, actually, in all of B.C. that can make that size of cheese because he has the perfect molds for that."

As the Assistant Director Marketing and Nutrition Communications with the Dairy Farmers of Canada, and someone who has attended the event in Whistler each of the last four years, Heiss would know the real deal with the cheese in the wheels that roll down Blackcomb.

This is the fifth year that the award winning cheese maker has produced those huge cheese rounds for the event. According to Heiss, the cheese, and the packaging, have withstood the test of time.

"They are really well wrapped so they don't completely dismantle when they reach the bottom of the hill, which is perfect," says Heiss.

"It's a nice cheese," she says of the cheese made in the Comox Valley. "It's very specific to Vancouver Island. It is a mix between a Havarti and a Gouda."

Edgar Smith, a VP with the cheese company, says through his website that the cheese his company produces is made from healthy cows living in healthy environments.

"We only use fresh milk produced on our selected local dairy farms, which practice sustainable farming and animal stewardship," Smith writes on his company website. "The designation means that the farmers must be good stewards of the land. The animals are stress free and live in healthy environments. Because the cows eat the local grass and herbs, generously watered by Pacific Ocean-soaked rain, the milk used to make the cheese has its own "terroir" or distinct flavour. The term is familiar to wine-makers, where different regions have their distinct terroirs."

The brothers say they are a small, specialty cheese producer born out of adversity, turning to cheese making in 2001 to find a home for the milk they produce.

Paul Sutter, the head cheese-maker, leads the cheese making. He brought his traditional Swiss cheese training to the Beaver Meadow Farms. In addition to making really big wheels of cheese he apparently captures the essence of the unique flavours of the Comox Valley in the artisan handmade Natural Pastures cheeses.

According to Heiss, unique cheese flavours start with the milk and trace right back to what the cows eat.

"In Quebec we have artisan cheese makers that live right where the St. Lawrence opens up to the Atlantic so whatever the cows graze, it has a big influence on the quality of their milk," says Heiss.

Edgar Smith says he consistently hears from judges at international cheese competitions that his cheese has a distinct ocean air influence to the taste of the cheese.

"We believe that it's got something to do with how the salt air, the rain, the soil, just seems to give the flavour to our milk," says Edgar Smith in an interview from his Comox farm. "We believe our milk carries this uniqueness that you just can't find anywhere else in Canada."

The passion can be heard in his voice and according to Heiss, that is an important ingredient.

"There's a lot of passion goes into that because the quality is so important," says Heiss.

For those who are interested in cheese at that level Heiss suggests attending one of a series of seminars during the festival.

For those who just want to chase cheese down a hill to win a Whistler Blackcomb season's pass plus the cheese wheel she suggests dressing up in a costume and signing up for the cheese roll on Saturday.

Real fun with real cheese is on the menu this weekend whether the cheese is being chased down a hill or sampled at the bottom of it.