Just up the way from Fergie's Café, the Cheekye River and the Cheakamus River meet. There was a time when anglers descended on this location, back when Squamish Nation members saw salmon bridges in the rivers.
Feb 5, 2014 8:00 PM By: Pique Newsmagazine Staff 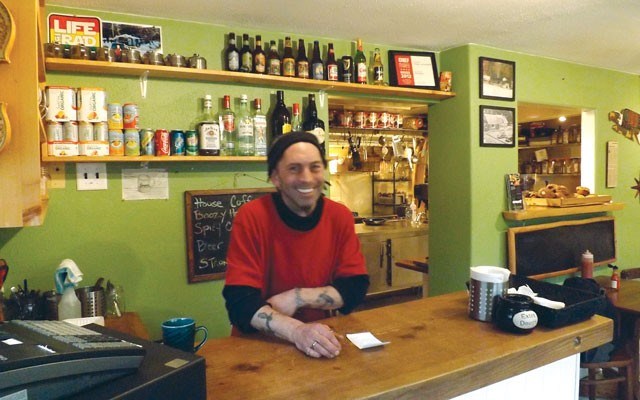 Just up the way from Fergie's Café, the Cheekye River and the Cheakamus River meet. There was a time when anglers descended on this location, back when Squamish Nation members saw salmon bridges in the rivers. People could almost walk across the river from one bank to the other on the backs of the fish.

Fergie's Lodge was a fishing destination where anglers could grab a bite to eat, spend the day on the river's edge and bunk down at night in a rustic cabin.

The anglers still come, but there's more emphasis on rafting trips to view salmon and eagles at what is now known as the Sunwolf Outdoor Centre.

The onsite food outlet carries the original name for the recreation hideaway at the entrance to the Upper Squamish and Paradise Valleys.

The eccentric-looking chef behind the small café is Brad Sherry. His smile is big, his kitchen small. There are only three tables in the café, with comfortable seating for six. Two picnic tables on the patio are strategically placed under heaters, and the lawn beside the café has outdoor seating for large breakfast and lunch groups.

"It's my spot," Sherry says with a genuine smile, his deep voice trailing off at the end of the sentence.

Sherry says he got his start in the kitchen at the age of 14 in 1984. His family owned the legendary Loggers Inn on Cleveland Avenue in Squamish.

He learned to cook in the restaurant, which most in Squamish felt was the community's best restaurant through the 1980s and into the early 1990s. (After formal training in Vancouver he had stints working at various kitchens in the city, including the Holy Rosary Cathedral on Richards Street cooking for the Catholic priests. He played music with a band when he wasn't cooking. But Squamish lured Sherry back. His parents needed help at their new venture in the Mountain Retreat Resort in Squamish.)

Many aspects of his operation now are similar to the way his parents operated their restaurants. There isn't much of a marketing budget for the café. The food speaks for itself. He says Fergie's Café relies on word of mouth promotion. During the quiet winter months there are days when Sherry runs the operation on his own, then as the busy summer rafting season picks up the weekend staff sometimes numbers six.

According to Sherry, the café serves home-style food with product you don't usually have at home.

"Caribou, venison, bison, we smoke our own salmon, we make our own corned beef," he says. "We take a lot of pride in manipulating the product that we bring in."

Sherry likes offering exotic food choices that surprise his customers. It just makes sense to him that a tiny restaurant in the backwoods with a chef who wears his hair in dreadlocks would offer menu items that aren't commonly found in mainstream food outlets.

"The unexpected quality of it blows people away," Sherry says.

He relates the story of a dinner his team catered on Jan. 31. It was a 40th birthday party with steak, prawns and scallops. His day started at 7 a.m. and finished 16 hours later but it was worth it, Sherry says.

It is on stressful days like that when Sherry, who lives off the grid in the Upper Squamish Valley, trades cumulative workday stress for musical notes at night. He plays a variety of different instruments.

"When you get slammed all day for your shift in the heat of summer — you get super stressed, get through it, get 'er done," he says with the stress mimicked in his voice. "Mentally, I take every ingredient in portions that I put on a plate, then that's how many notes I have to play to unwind. The connection between music and food, that's what it is for me."

Along with linking food and music Sherry brings together food and spirituality. Seeing through people's food needs is every thing to him.

"I want to just be able to see to make people healthy because spirituality is health and eating is health," he says.

There's a genuine look in his eyes that gives him away. He's passionate about food, and he puts everything he has into what he serves, with a hint of spirituality added. It's all washed down with soothing acoustic musical notes in the peaceful setting of his Upper Squamish escape.

Cook the bacon and sauté the onion in pan. While those ingredients are cooking, bring a saucepan two-thirds filled with water to a boil, then add the vinegar. Bring the water to a boil again, then lower the heat to a simmer.

Make the hollandaise by first melting 10 tablespoons of unsalted butter. Meanwhile, into a blender put three egg yolks, a tablespoon of lemon juice and half a teaspoon of salt. Blend for 30 seconds until the eggs lighten in colour. Turn the blender to the lowest setting and slowly dribble in the hot melted butter. Transfer the sauce to a container and set it by the stovetop.

Put the eggs into the simmering water. Turn off the heat and cover for four minutes.

Plate the biscuits and top with apple slices, sautéed red onion and bacon. Take the eggs out of the water after four minutes and place them on top. Add grated cheese and top with hollandaise.