From the top restaurant in Vancouver to the restaurant on the top of the mountain, Chef Steve Ramey has arrived at Christine's on Blackcomb.
Dec 2, 2015 5:00 PM By: Alison Taylor 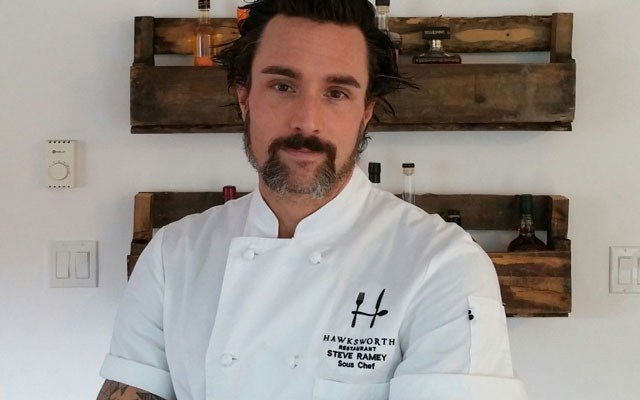 From the top restaurant in Vancouver to the restaurant on the top of the mountain, Chef Steve Ramey has arrived at Christine's on Blackcomb.

And there's little doubt that skiers, snowboarders and sightseers will be able to taste the difference when Christine's officially opens on Saturday, Dec. 5, the final unveiling in Whistler Blackcomb's multimillion-dollar renovation to the Rendezvous Lodge.

For the last four and a half years Ramey has worked as sous chef at Hawksworth Restaurant — four-time winner of Vancouver Magazine Restaurant Award's Best Upscale Restaurant.

But kudos like that don't come easy. It was a job full of long hours, intense pressure, non-stop busyness, perfection.

And his reasons for the move to the mountains are simply this: "The ability to make awesome food and have a lifestyle that I think I've been trying to get for the last few years."

The flavour of Hawksworth, however, comes with him, permeating through Christine's new menu.

"I think it's just the attention to detail and making balanced plates — texture, acidity, richness, lightness — those are some of the main things I learned when I was there," he said.

It's not just that Ramey is serving seared scallops as an appetizer with carrot, cucumber, fried chickpea, lime and Indian spiced vinaigrette. It's that the scallops are coming to the top of the mountain, live from a First Nations-run scallop farm on the West Coast.

And it's not just that he's creating soy braised beef shortribs with roast carrots and king oyster mushrooms. It's that the beef is coming from family-owned Two Rivers Specialty Meats in North Vancouver.

This the kind of attention to detail Ramey brings.

"I've brought a bunch of new suppliers to the mountain that they haven't used before, which is kind of cool and it gives us access to more product that wasn't available up here before," said Christine's new head chef.

"I wanted to have essentially the same ideas and philosophy behind it (as Hawksworth). And I had to simplify a little bit just because we have limited prep time on the mountain here."

Ramey, who grew up snowboarding on the North Shore, may be new to working at Whistler Blackcomb but he's no stranger to ski fare, having paid his dues at nearby mountains.

"One of my first kitchen jobs was at Cypress and then I worked at Grouse as well after that," he said.

This is Ramey's fourth restaurant opening, so he's also no stranger to the chaos the goes along with the days before the doors open to the public.

This week he was running through the recipes with the kitchen staff, doing tastings with the servers, working out any kinks before Christine's kicks off for its winter season.

That chaos, however, belies the calmness to the conversation, and the sense that everything is right on target, that Ramey is where he should be.

"You can step outside of the kitchen, look out the window and you're surrounded by beautiful mountains and snow, right?" he said.

The Rendezvous Lodge opened last weekend with the official opening of Blackcomb Mountain. Check out the changes to the lodge, or experience a little taste of the city chef at Christine's from Saturday, Dec. 5 and throughout the season.

For spiced oil: place all ingredients in medium pot and heat on med high heat until just bubbling. Remove from heat, cool to room temperature and strain out spices. Reserve.

For vinaigrette: Place ginger, lime juice, honey, pinch of salt into blender or food processor, and purée until smooth. Add coconut milk and sprinkle with xantham gum. Blend on high until emulsified. Will be very thick at this point. Stream in spiced oil until emulsified. Add salt and adjust consistency with lukewarm water if necessary. Refrigerate until needed.