There's a new player on the local casual dining scene, but don't assume the Brickworks Public House is just like all the other pubs dotting the village.
May 7, 2014 10:00 PM By: Brandon Barrett 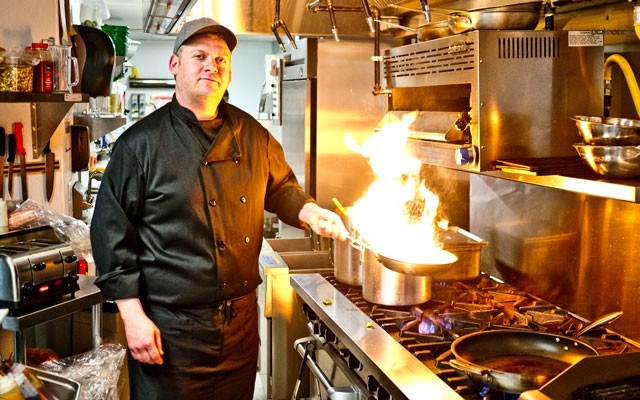 There's a new player on the local casual dining scene, but don't assume the Brickworks Public House is just like all the other pubs dotting the village.

Whistler's newest Main Street eatery has at least one thing going for it that head chef Chris Caswell hopes will separate it from the rest of the crowd: a smoker, which has been put to good use since Brickworks opened last month.

"We're trying to offer people something that they can't get all the time in Whistler," Caswell says. "There's definitely items on our menu that are unique from anywhere else you can go in Whistler. It's not the same standard, pre-made, pre-frozen pub food that pretty much every pub on the Stroll seems to be doing. We're actually doing everything fresh, in-house, from scratch and basically trying to offer a better product in the pub environment."

Caswell, who also serves as head chef at Three Below, says a number of menu items have already become favourites with diners, like a smoked brisket sandwich, a smoked half-chicken glazed in apple cider vinegar and honey, a delectable curry short rib poutine and, of course, pork belly. Glorious pork belly.

"Our pork belly buns, lightly seared off until golden brown, glazed in honey hoisin sauce and dressed with an Asian slaw, are definitely something you don't get every day at a pub," says Caswell.

As "the new kid on the block" Caswell said business has been steady at Brickworks so far, with plenty of interest from locals and hotel guests (Brickworks sits next to the Delta) who've been impressed not only with the chef's tasty homemade menu, but the pub's vast selection of regional craft beers.

"The feedback has been very positive," he says. "People have absolutely loved the food, they've loved the craft beers on tap, and we definitely have a great selection of craft beers in here, so everyone's raving about that."

Committed to offering an array of B.C. brews, the perfect accompaniment to a heaping pile of smoked meats, the Brickworks' taps highlight a range of small-scale producers, like Driftwood Brewery, Vancouver Island Brewery, Central City Brewers, Mission Spring Brewing Company and, of course, the resort's own Whistler Brewing Company. The pub even offers gluten-free beer, with the hopes of satisfying suds lovers of all kinds.

Like so many others who've made the pilgrimage to Whistler, Caswell knew he wanted to make the resort his home after his first visit two years ago.

"All it took was about 20 minutes walking through the village to decide I needed to live here," he recalls.

Originally from Vancouver Island, Caswell cut his teeth in a Mediterranean kitchen there before moving on to the head chef position at Langley's Rendezvous Pub for six years. After officially making the move to Whistler over a year ago, he was hired by the owners at Three Below, who opened Brickworks the first week of April. While he said he mostly inherited the Three Below menu, he appreciated getting to put his creative touch on the dishes he helped create at Brickworks.

"(I'm inspired by) working with fresh ingredients and also being able to create new and exciting dishes every single day. That's a huge thing, having creative control over a menu and basically being able to produce the food you want to produce," Caswell says.

Just in time for grilling season, the chef is sharing his dry rub recipe to coat your next plate of ribs with.

"It's packed with a lot of flavour and pairs well with some nice roasted vegetables on the barbecue or grilled corn," he says.

4 Racks of Baby Back Pork Ribs

Combine all dry rub ingredients in a large mixing bowl and mix thoroughly.

Then lightly coat each rack of ribs with the veg oil. This helps ensure the dry rub will stick to the ribs and as well the oil helps break down the sulfites in the spice rub.

Apply dry rub liberally to each rack of ribs. Rub and massage it into the meat with your hands.

Wrap coated ribs in tinfoil and refrigerate for at least four hours (24 hours would be best to allow the dry rub to completely infuse with the meat).

Heat barbecue to 225 degrees Fahrenheit with the lid closed using only the left burner.

Place racks of ribs (still in foil) on the right side of the grill (not on direct heat) and close lid.

Cook at 225 degrees Fahrenheit for three hours then remove ribs from barbecue and unwrap foil.

Lightly baste in your favorite barbecue sauce and return to the heated side of the barbecue flipping regularly until the sauce has glazed.

Remove from heat and let rest for a few minutes before eating.