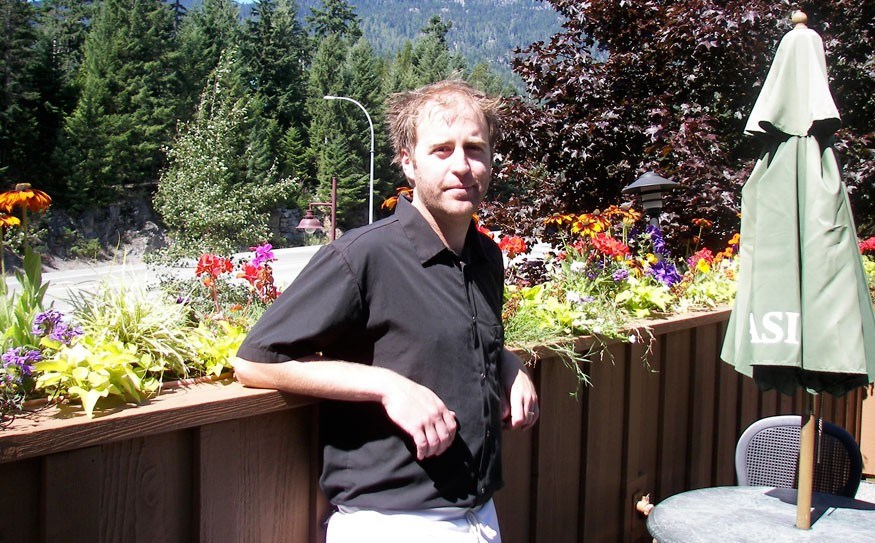 PATIO PARADISE For nine years Chris McKinney has been preparing crab cakes and other fresh menu items at the Rim Rock Café.

Dungeness crabs are harvested all year and that's just as well says Chris McKinney of the Rim Rock Café since his customers order crab cakes all year too.

McKinney, who is originally from Montreal, says he chose to highlight the Rim Rock's crab cakes because the coastal waters, just a few mountain ranges to the west and less than a one hour drive to the south, offer an abundance of seafood that is easily accessible to Whistler foodies.

"Summer time, the crab is always so good, and you can't go wrong with the corn (either)," he says.

The fresh crab that goes into the Rim Rock crab cakes is most abundant from May to October from Mexico to Alaska. But we humans aren't the only ones who covet the Dungeness crabs. Octopus, halibut, dogfish, sculpin, birds and other crabs seek out the tasty meat under the hard Dungeness shell.

To find the beginning of this story one has to jump back to 1998 when McKinney first came to Whistler. His sister was living here already and she helped him find an entry job in the resort. It was his second resort job that landed him in the food and beverage industry.

"One day I saw an ad in Pique for a cook at Teppan Village — no experienced required — so I thought this is my chance, I'll get in the kitchen there," says McKinney.

One of the owners was also from Montreal, he explains. They got along well and so began McKinney's cooking career. He tried to leave Whistler – a stint on a commercial fishing boat wasn't quite as interesting as what he left behind in Whistler. Like so many before him, McKinney was lured back. He applied for a job at the Rim Rock and owner Rolf Gunther hired him.

Nine years later for McKinney, he's excited about the Rim Rock going into its 25th year of operations offering its consistent menu focused on meat and seafood dishes.

In the course of those nine years, McKinney admits to stealing away to France for a winter season and spending a little time at Langara Lodge.

"It is funny, with the Rim Rock everybody always comes back," he says with the laugh of a stock trader with insider information. The staff retention at the Rim Rock is impressive and McKinney is quick to admit his nine years is nothing compared to the number of years most of his coworkers have dedicated to the Rim Rock.

"We are always busy," he says. "It is just a good vibe. Rolf is very hands off as far as a boss goes. He knows we can all handle ourselves and we do."

The Dungeness crab McKinney serves at the Rim Rock is as fresh as the halibut, which is in season right now and very popular with Rim Rock customers,

According to McKinney, halibut is more popular than salmon and significant amounts of halibut is being served this season.

"It's tasty and people really look forward to halibut season," says McKinney. "B.C. diners are informed about it."

But there is more to the 25-years of success of the Rim Rock than just its great seafood, he says. The crab, the halibut and all the other fresh food is offered at great value.

"The food is pretty simple," says McKinney of the dishes he produces. "There's not a lot of crazy things going on in our kitchen. There's no nitrogen and there's no chemicals. It is just basic, simple food.

"People like the value that they get when they come here. There are very few small plates here."

Reserve 1.5 cups of panko for dredging

Combine all other ingredients, form into cakes and coat with remaining bread crumbs.

Sweat the shallots and corn in butter. Add wine and cream then reduce for five minutes. Puree and pass through a fine strainer. Keep warm or reheat in a saucepan.