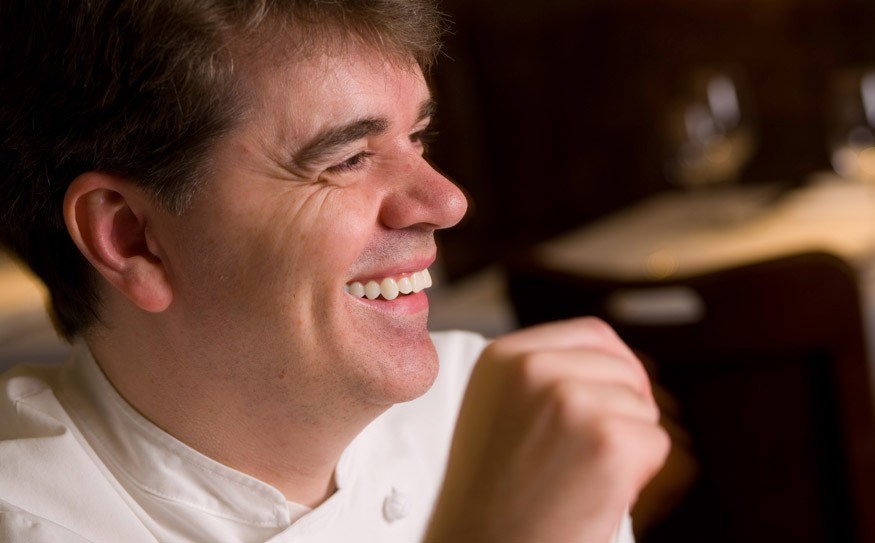 WONDERFUL WAVE Chef James Walt will work with a team of 17 to serve dinner outdoors on Saturday at Rainbow Park on the shores of Alta Lake.

The wave is a standard activity one might expect to see and participate in at a Vancouver Canucks game or at B.C. Place watching the Lions take on the Toronto Argonauts.

The wave is not something one might expect to do while sitting down at an outdoor long table for dinner served up by James Walt and his team from Araxi.

The executive chef from Whistler Village restaurant says he was struck by how long the tables are at his events when a wave starts.

"The longest table we had last year in Pemberton was almost 170 seats and it was pretty cool," he says in his quiet office just off the noisy Araxi kitchen Monday morning before the big event. "That's when you realize how long the table was."

He says when he watched the wave roll down the table he really got that it was a massive table out in the field at North Arm Farm.

"We've seen that a couple of times," says Walt. "It usually has got to be somebody start it at the end and they have to kind of build it up a bit and get everyone involved. It's awesome."

Walt says his past long table dinners have attracted a wide range of people. It is an expensive dinner out but according to Walt, some people make a real effort to do what's needed to be there. For some, he says, it means putting a weekly dinner out habit on hold for a few weeks to save up for the special event.

"It's a lot of fun and at the end it is quite gratifying because the guests are right there and there's a lot of interaction," says Walt. "They have fun. People doing the wave at the table and stuff, it's pretty cool. It is an experience for everybody, us included."

One of the guests at one of the events hosted last year at North Arm Farm was the Canadian Ambassador based in Rome. Walt says his former boss met all kinds of amazing people and he wouldn't have had that opportunity anywhere else.

"The one thing that they all have at the table is that they like food and wine so there's that one bit of common ground but everybody is totally different and we get people from all over North America so it can be pretty fun for just meeting people as well," says Walt.

While people come from all over the continent and the world for the outdoor summer events put on by his restaurant there are many residents who also take in the fun.

"A lot of Whistlerites were at the last one," he says.

For those who were able to get a ticket to the event at Rainbow Park on Saturday before the tickets sold out, the menu includes oysters, corn soup, heirloom tomato salad, tuna, lamb, beets, Swiss chard and summer squash.

A kitchen staff of five will put it all together in the field and a staff of 12 will handle front of house duties on Saturday, says Walt.

That team of five starts preparing two days in advance but Walt says because the emphasis is on fresh ingredients most of the work is done in the time leading up to the service.

"We do everything with a family-style service so we put all the food on platters," says Walt.

The event starts with fresh-shucked Sawmill Bay oysters and cheese from the Golden Ears Cheese Company as the reception course, followed by corn and basil soup.

"Chilliwack corn is just starting," says Walt. "I always kind of like corn when it first shows up."

Walt plans to serve heirloom tomato salad once guests are seated, followed by organic greens from Rootdown in Pemberton. The next course will be another salad with albacore tuna playing the starring role in the dish with quail eggs playing a co-starring role.

The meat course for this event will be a mixture of two types of Ashcroft lamb and Pemberton Valley beef cheek fritters served with beets, summer squash and Swiss chard from North Arm Farm.

To go with the food, wines will be served from the Mission Hill winery in Kelowna.

Walt says Master wine maker Ingo Grady of Mission Hill is going to be at the event.

He and the other guests will wind the evening down with black forest cake featuring cherries from D'Arcy, buttermilk panacata with apricots and peaches along with local fruit macaroons. Walt hadn't yet decided on raspberry or strawberry macaroons.

Either way, when the guests start doing the wave he'll see once again just how long the long table is.

Strip the corn kernels off the cob and set aside both the cobs of corn as well as the corn kernels. Heat half of the butter in a large saucepan, add two of the chopped onions and sweat until softened. Cut the cobs in half and add to the butter – onion mixture; cook for five minutes. Add just enough water to cover the ingredients, bring to a boil, reduce to a simmer and cook for 20 minutes. Strain and reserve. This will make approximately six litres of stock.

Heat the remaining butter in a saucepan and sweat the other two onions until softened, but not coloured. Add the corn kernels and cook for five minutes. Add the six litres of corn stock, bring to a boil, reduce to a simmer, and cook for 10 minutes. Season with a little salt and pepper then remove from the heat and let cool slightly. Once cooled, transfer the mixture to a food processor and purée. Transfer back into the pot and add the basil leaves and cream. Let stand and infuse off the heat for 30 minutes. Strain through a fine mesh sieve, check for seasoning and reheat when ready to serve.