Kreg Graham, the new executive sous chef at the Fairmont Chateau Whistler, grew up in Pinawa, a town without a restaurant large enough to warrant having a professional chef.
May 14, 2014 10:00 PM By: Cathryn Atkinson 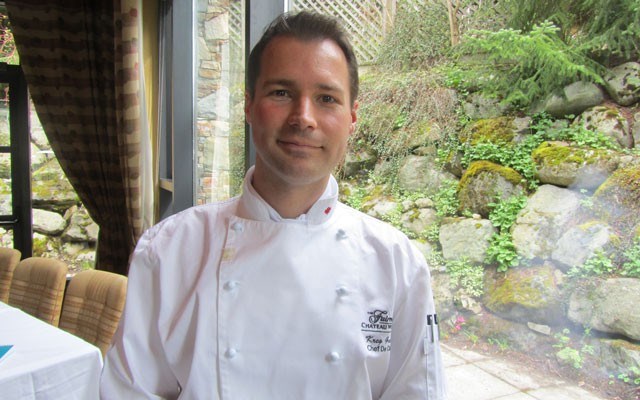 Kreg Graham, the new executive sous chef at the Fairmont Chateau Whistler, grew up in Pinawa, a town without a restaurant large enough to warrant having a professional chef.

It is located in cottage country near Manitoba's border with Ontario, but this relative remoteness didn't hold him back. He could dream.

"When I went into restaurants I was always wondering what happened in the kitchens. From a young age it was my dream to own my own restaurant, that got me into that field," he said. "When I was a little older I realized that being a chef could become a career."

He also threw dinner parties at an age when other boys are trying to talk to girls and avoid English homework.

"I cooked a lot at home when I got into my later teens. I would hold dinner parties for my friends and things like that," Graham said.

"The first one I can remember was a complete disaster. I was pretty young; I think I was about 12. It was a surprise for my mother to come home and find out that she had to fix it. I had no idea. I'd made a soup that was raw vegetables and water.

I did a few more and I started to get better."

But there were culinary benefits to living in the Canadian Shield.

"My father was a hunter, so I grew up eating wild meat. I don't think I ate beef until I was 18, other than ground beef for hamburgers. It was all elk, moose and deer," he said.

Cooking school in Prince Edward Island followed, along with an apprenticeship at the St. Charles Country Club in Winnipeg.

He spent several years at the Hilton Toronto and the Hilton Seychelles Northholme Resort, before moving to the Shangri-La Hotel in Fiji. He earned his journeyman's red seal culinary certificate and entered a lot of cooking competitions, such as the Culinary Olympics. The competitions started when he was still in Winnipeg.

"I was exposed to people who did that and so I did it myself. I learned a lot and made good connections, which led to the Hilton Toronto," he said.

"I'd always felt like I wanted to travel because I was from a small town, just one of those guys who wanted to get out."

Now 32, Graham moved to his new role at The Fairmont after two-and-a-half years as executive chef at the high-end Shangri-La Chiang Mai.

"It was a wonderful experience. I got the chance to eat Thai food on a daily basis, which is wonderful. I wouldn't necessarily say that I was cooking a lot of Thai food myself professionally, I would try to cook and learn some of the dishes," he said.

"I generally had to leave the professional cooking to my Thai staff. It's a really intricate cuisine and you really need to know the ingredients. It takes years. Delegation is really important."

They also cooked Western style, with more of Graham's hands-on input, and as executive chef there were managerial duties.

He says that the experience of working in a demanding atmosphere with international clientele has been a bonus.

"(The international hotels) are much less casual," he said.

His young daughter, who has just turned one, was the impetus for coming home.

We wanted to come back to Canada because my wife and I wanted our daughter to be closer to our parents. I couldn't imagine if my first grandchild was so far away, I put myself in my mother's shoes and I wanted her to see our daughter as much as possible," Graham says.

"Fairmont was really the only company I considered when wanting to come back to Canada... It's a really great food culture."

He started his new role at the Fairmont Chateau Whistler on May 1 and the experience of acclimatizing to the Fairmont is not unlike moving to a new city, meeting new people and trying to work out the lie of the land.

His particular "neighbourhood," the kitchens, has 60 chefs at work. The stewarding team has a further 30 workers employed.

"I'm still going through my orientation process, meeting with representatives of various departments, today it was people from sales, marketing and events. It's getting to know the hotel," Graham said.

He says it is too early to discuss menu changes.

"I really want to get to know the suppliers, the producers in Pemberton. I want a good relationship with them. A lot of my chefs are really in touch with some of the local purveyors," he said. n

"B.C. is a chef's paradise. There is a big food culture here and that's great. The opportunity to come here came up and I jumped all over it."

Place the butter into a pan over medium heat and cook until the small milk solids in the butter are lightly caramelized and turn a light brown colour.

Combine the salt, eggs, granulated and brown sugar and honey in a bowl and whip with a whisk until the colour has lightened and the eggs have tripled in volume. Sift in the baking powder combined with the flour, 1/3 at a time folding gently with the whisk. Gently fold in the melted and browned butter, poppy seeds and Meyer lemon zest, and refrigerate overnight.

Heat your oven to 375 F and prepare your Madeleine mould by buttering it with unsalted butter.

Pour the batter into the buttered moulds and bake for about 7 – 8 minutes. Once cooked they should have a golden colour with light brown edges. Remove from moulds and place on a cooling rack until you are ready to serve. Enjoy with a cup of afternoon tea.