It takes a week or so to pin down Michael Guy, the new executive chief for all food services at the Pan Pacific Whistler and the Dubh Linn Gate Irish Pub. But it's not what you might think.
Jan 22, 2014 8:00 PM By: Cathryn Atkinson 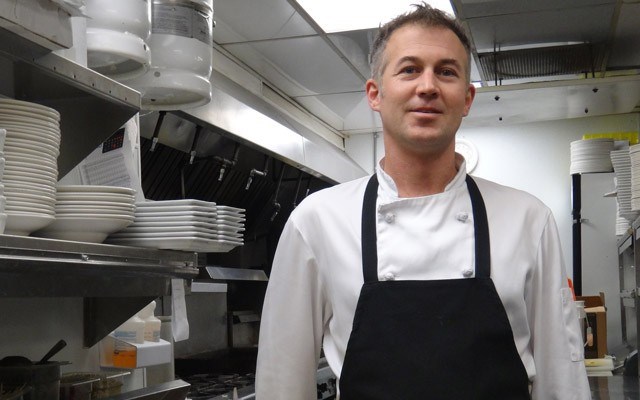 It takes a week or so to pin down Michael Guy, the new executive chief for all food services at the Pan Pacific Whistler and the Dubh Linn Gate Irish Pub.

But it's not what you might think. Guy is clearly busy, but what keeps him away from interviews is the fact that he, like every other healthy staff member, is helping to cover for others who are off sick with the flu or colds.

And this came after Guy started the new position on December 12, having left a similar role at the Nita Lake Lodge in Creekside. Prior to this, he worked at Araxi and in Vancouver, Ontario and Italy. He has lived in the Sea to Sky region since 2008.

He offers a glimpse of what it takes to move into the busy kitchens of one of the largest operations in Whistler.

Once Guy was through the doors at the Pan Pacific he went straight into the Christmas season, a more pleasant reason to be busy than sickness.

"I had the nice whirlwind of Christmas and Christmas season to see the location at its full power, which was great. Each week you would notice how much busier it was getting, so it was good to see how the team works under a lot of pressure like that," Guy says.

He describes his role as overseeing a happy place.

Guy reels off the number of kitchens now under his watch; there's the small kitchen at the Pan Pacific's village centre location, then there are the banquet facilities at the mountainside location in the Upper Village, along another banquet facility and, of course, "the pub" – a.k.a. The Dubh Linn Gate Irish Pub.

"The pub sees the most people in and out of it in the course of the day. When I was at Nita Lake we had a full service upper-end dining restaurant, a lounge with a different menu and a café, which was grab-and-go, and we had banquets," Guy says.

"The sales volume over here (at the Pan Pacific) sort of eclipses that. In the middle of the action, there's more room and more people milling about. It's great, I like it."

When asked what it is like for an established chef to take on a role like this, and whether he steps in to learn the rhythm of the place and then seek refinements or other changes, Guy says it depends.

"Usually you want to get your hands dirty and work with the cooks directly, as soon as possible, because you then get a better idea of their individual situations in each section of the kitchen when you are actually participating in preparation for lunch and dinner service. From there, it gives you a better idea when you are practically working in terms of any ways you can streamline things or any alterations or modifications you could make along the way," he says.

Guy believes that he got to know people's true characters when it was demanding and he says he does not want to make major changes.

"Any time you work in volumes, a lot of the changes you make are ones that you want to see apply directly to sales results, which means a lot of guest satisfaction with people ordering items. Here we have a really good spread, so it is nice to see that all the products are moving."

The man who perfected this, previous executive chef Dave Currie, had been at the Pan Pacific for 15 years.

For example, the Pan Pacific village location is currently used to providing guests with breakfasts only, but in the next few weeks they will be offering a cocktail service mixed with a late night menu.

"When you see a full house in the afternoon for the après with a live band... there's so many good things already in progress that have been in place. I think a lot will be to just fine tune the existing product, based around guest satisfaction."

It's a lot of multitasking.

"It really is, but then cook and chef jobs always are but that's what makes them fun," Guy says.

In a large pot, heat the canola oil over medium low heat.  Add the onion and cook until soft and lightly coloured.  Add the ginger and jalapeno and do the same.  Add all of the spices and cook for five minutes until very fragrant.  Pour in the whole plum tomatoes and bring the ingredients to a simmer.  Cook for one hour at a low simmer.  Remove from the heat and purée with a hand blender until relatively smooth.  If you like a thicker soup, place back on the stove to reduce it a bit.  If too thick, blend a small amount of water into it.  Season with salt to taste.  When serving, garnish with a spoon of yogurt, some cilantro sprigs and a piece of lime if desired.  Serves four.