Even with a blanket of snow covering the Edgewater Lodge and clouds obscuring the view south to Whistler and Blackcomb Mountains it is clear that executive chef Patrick Fortier enjoys a scenic work environment.
Jan 9, 2013 8:00 PM By: John French 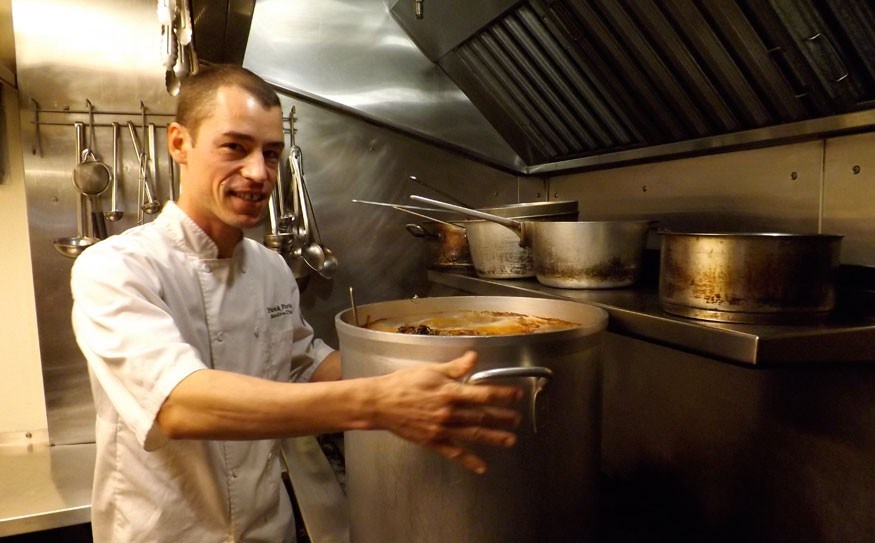 EDGE OF PARADISE Patrick Fortier is the executive chef at the Edgewater Lodge on Green Lake.

Even with a blanket of snow covering the Edgewater Lodge and clouds obscuring the view south to Whistler and Blackcomb Mountains it is clear that executive chef Patrick Fortier enjoys a scenic work environment.

It is this very view that has couples flocking to the lodge every weekend during wedding season. Some weekends the lodge hosts more than one wedding. With 12 rooms and capacity to host up to about 30 overnight visitors, the lodge has become known as one of Whistler's premier wedding destinations due to the great view, the ideal setting and food that lives up to the world-class scenery from the dining room.

Jay Symons, one of the lodge owners, heaps praise on the Montreal-born chef tasked with making sure the lodge's culinary offerings are fit for each and every Edgewater bride along with all the other diners who enter the restaurant.

"He's so good we don't deserve him," says Symons as he pulls up a seat, Green Lake's icy winter coat at his back. "Its true."

The edification from the lodge boss evokes a nervous laugh from the chef and for a fleeting second there's a look on Fortier's face that indicates he isn't sure how to react to a clear indication that he's valued by the lodge ownership.

Fortier's kitchen adventure started when he was 14. He was a dishwasher at the Senator Hotel in Timmons, Ont., He signed on for his apprenticeship at 16 and didn't look back.

Travel he did. Fortier has work experience in Toronto, Montreal, Mont Tremblant, Lake Louise, Vancouver Island and he went to the Grand Cayman Islands where he worked under French chef Eric Ripert at the Ritz-Carlton, Grand Cayman.

Canada called to Fortier and his pastry chef girlfriend, Isabelle Dionne, after some time in the Cayman Islands.

They discussed where they wanted to be. They settled on Whistler. The main draw was the resort's close connection with nature. Skiing and fly-fishing are pursuits Fortier loves. They made the move, trading sun for snow. The couple scored work at the Four Seasons soon after touching down in the resort. Dionne continues her work as one of the pastry chefs at the Four Seasons while Fortier has had stops at Whistler's Hilton and the Nita Lake Lodge. He describes how he wanted to make the move from sous chef so when he heard the Edgewater Lodge was looking for a chef he applied.

Fortier was brought on during the annual winter closure a year ago so there was no transition from the previous chef. He says he created his own menu. A northwest menu with French-influences is his description.

On this cold winter day, preparations are underway for a busy Saturday evening with 30 reservations on the book.

While local produce is scarce with snow covering the ground and daytime temperatures challenged to get up over five degrees Fortier says the lodge has a summer garden that produces herbs, lettuce, strawberries, peas and other homegrown favourites.

"Strawberries kind of took over everything," Fortier laughs.

When the snow melts and spring reclaims the ice on Green Lake, the whole Edgewater team pitches in to set the garden into production mode. Fortier says he gets in there along with the other kitchen staff members and the lodge's grounds keeper.

"We all go in and do the big spring clean up and then go on from there," says Fortier in between sips of his coffee. "It does take everybody because it is quite big."

While the snow lovers enjoy the Edgewater Lodge winter menu, the wedding reservations are coming in. In just a few months, brides in long white gowns will contrast against a summer background of lush green on a base of emerald-coloured lake water, accented by garden-fresh red strawberries.

Salmon with Cauliflower and Truffle Puree and Lemon Gremolata

Combine all ingredients in small bowl, set aside.

Carve the green leaves and the stem from the head of cauliflower and break the head into florets.

Add the florets and the stock to a pot, cover, bring to a boil, then lower the heat so the stock is simmering. Cook the cauliflower until it is meltingly tender.

Drain the stock from the cauliflower.

Mash the cauliflower well with a potato masher, then stir in the truffle, butter and cream.

Adjust the seasoning with salt and a twist or two of fresh cracked pepper, set aside.

Season each side of the salmon with salt and pepper and sear in a hot pan with oil until golden. Finish in oven to your desired doneness.