RD Stewart is a fortunate chef in that he has been able to build The Red Door Bistro in Whistler Creekside from the bottom up.
Sep 16, 2015 6:00 PM By: Cathryn Atkinson 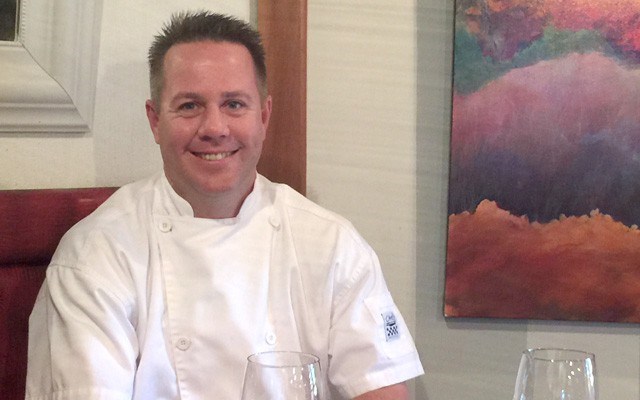 RD Stewart is a fortunate chef in that he has been able to build The Red Door Bistro in Whistler Creekside from the bottom up.

The owner of the Red Door, Karen Roland, approached Stewart one day as he was watching sports at Roland's Creekside Pub next door, offering him the opportunity of being executive chef at her proposed new restaurant.

At the time, he was the sous chef at Araxi — a job he enjoyed. His job as executive chef at La Rua ended when that restaurant closed.

The Red Door Bistro has now been open for around 18 months.

Stewart recalled ripping out walls at the new restaurant and working on the look of the place.

"In the past, I've helped out and designed stuff, but this was my first attempt in charge. I like challenging myself all the time. I don't know how many sheets of paper I went through in order to see what would work," he said.

"We wanted it bistro-y. The cedar was already there, but we redid the kitchen in stainless steel, created the bar. And it all works — the way it looks — with the leather benches and the mirrors and modern lighting. It's kind of funky, there's no other room like it in town."

The desire, he added, is to give it a French look.

Said Stewart: "That's my background. I use French techniques; I try to put a West Coast spin on it. I don't want to be cliché but it's all hands-on cooking. There's no molecular gastronomy going on. It's all touch, feel, taste, slow cooking, braising properly rather than dropping it into a immersion circulator. It's old school."

And it seems to be working.

"I think that is what makes this bistro work, it's quality food. You get good value for your money, it's good service and you've got to be consistent. The formula seems to be working. "

This classical approach includes heavy sauces in the winter and light sauces and vinaigrettes in the summer.

"And then you've got West Coast food, but we also do cassoulet, lamb, duck. We try to use B.C. stuff but try to keep the French team in play," he said.

The rib recipe Stewart is sharing was a winter dish taken off the Red Door menu when this past spring arrived, but this led to complaints from fans. He brought it back and has "sold tons" all summer.

"I guess it's because people don't take time to do it at home, which is why I gave that recipe. It's not super hard; you just have to be patient. It takes three hours," he said.

"The same recipe can be applied to lamb shanks as well."

He said changes in the way the resort has sold itself have turned it into a year-round destination from the 2010 Winter Olympics onward.

"I don't want to be political but whatever council decided to do for this town, organize these events, it has been a blessing," said Stewart. "You don't have to worry about dead season, or saving up your bank account so you can sit on your hands for a month or two. There's stuff to do all the time."

Originally from Burlington, Ont., Stewart studied culinary arts at George Brown College and has lived in Whistler for 20 years.

"I was in hotel marketing and management, then I realized I didn't like dealing with people one on one. But now I have an open kitchen and I'm fine with it," he laughed.

The Red Door has a 40-seat bistro inside, with room for an additional 30 people on the patio. It is served by five chefs and five floor staff.

"I change the menu in the bistro at least four times a year. Some things stay, signature dishes or appys, but I'm constantly looking at whatever is in season. Salmon or halibut is in season — and about a month from now I'll replace it with something hardier that is in season; I use (Pemberton's) Rootdown Farm, though you can't do that in the winter.

"I go with what's available and use what is as fresh as possible."

The winter menu is due in November and has not yet been finalized. In the meantime, said Stewart, he has been preparing for three tasting dinners that the Red Door is featuring during the Cornucopia festival in November.

Stewart is also in charge of Roland's Pub, where he was first offered his role. There is a pub chef in place, though he oversees the menu and the bar.

"I changed that menu from deep fried jalapeño poppers and deep fried pickle spears," he said.

"I started changing the philosophy, teaching the guys how to do stuff by hand instead of opening up tins.  I think both the staff and the customers have liked it because it is better quality pub food."

2 Tbsp cornstarch and water mixed — to form a slurry

In a large pot, or Dutch oven on high heat, pour in enough vegetable oil to coat the pan to about one millimetre in height.

Add carrots, celery, onions and mushrooms — saute for six minutes until golden brown. Add garlic cloves and cook for another two minutes. Strain mixture into a bowl. Discard the oil and set vegetables aside.

In the same pot, start again with oil on high heat.

Sear the beef on both sides until a nice brown crust is achieved — about two minutes per side.

Put vegetables and all other ingredients, except the cornstarch slurry, into the pot and bring to a boil for five minutes.

Skim off any foam that appears. Put a lid on the pot and place in the oven and cook for 2.5 hrs.

Remove from the oven and uncover. If the sauce is not thick enough for your liking, you can add the cornstarch slurry and cook on the stove top for another six to seven minutes to desired thickness.

Serve with a good portion of mashed potatoes.