The view of Mount Currie from the two vast terraces of the Black Squirrel Restaurant is so good that to improve on it you'd have to be climbing the mountain.
Jun 12, 2013 9:00 PM By: Cathryn Atkinson 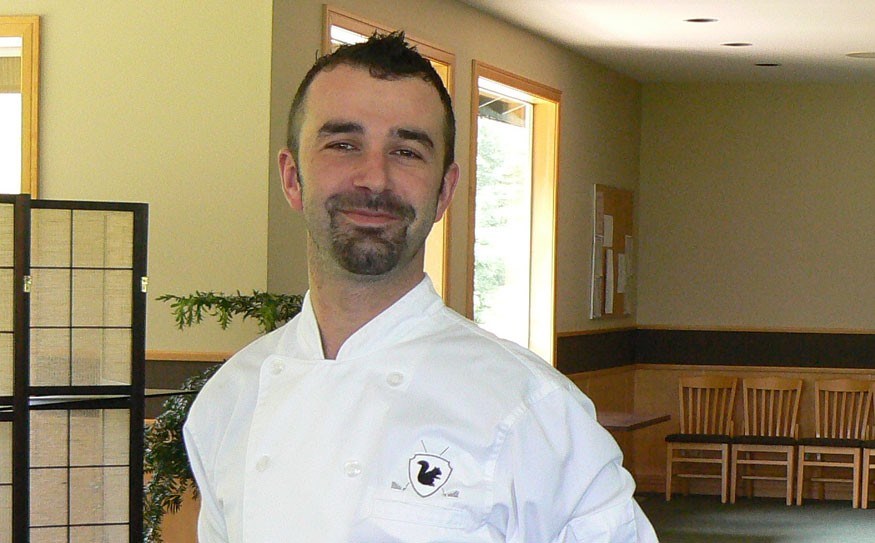 Black Squirrel Magic Executive chef Richard Pierce uses his experience in cooking Asian dishes for the menu of The Black Squirrel in Pemberton.

The view of Mount Currie from the two vast terraces of the Black Squirrel Restaurant is so good that to improve on it you'd have to be climbing the mountain.

The Black Squirrel is the eating and drinking hub located at The Meadows at Pemberton Golf Course and affords great views of the golfing greens and the aptly named Green River flowing below the legendary guardian of the valley.

The Meadows recently changed ownership, with the Sunstone Ridge Group taking the helm, and general manager Kevin McLeod says that with new staff and new head chef Richard Pierce, The Black Squirrel aims to be a local hotspot that attracts diners from far and wide.

One big change, McLeod says, is that the menu has broadened out with greater choice. There is "comfort kind of food but there is also an Asian flair to a lot of our dishes," says McLeod.

Pierce said he learned how to cook while teaching English in Vietnam and Cambodia. He became friends with a lot of locals, who would take him to markets and teach him their styles of cooking.

He has tried to combine this knowledge with more recognizable fare.

"We tried to keep the menu when we started off fairly simple, with stuff that everyone likes," Pierce said.

Sandwiches play a big part of the menu, with a cheeky golfing twist, like the Mulligan Roast Beef and grilled cheese "as the golf gods intended." There's a Squirrel Club that thankfully has no squirrel in it (but chicken, instead). There are also a range of burgers made with Pemberton Natural Beef, the valley's best vegetables and the ever-holy Pemberton spud. And there is pasta, fish tacos, and a new line in pizzas.

"We've got a new stone oven for pizzas, it's a big thing that we're doing this year that is working out really well," McLeod said. "The new menu is a huge hit and we've been getting positive feedback. It wasn't as diverse before, with a little more higher end offerings on the menu. Now it's a better price point for everybody. That's important for Pemberton."

Pierce adds: "But we're also doing a third page for the menu where we will do our specials for the week and that's where I get the chance to be creative and make the stuff that I really want to do. It has been a good test run for new menu items.

"We're trying to keep the menu relatively small and add a fresh third page in every week because Pemberton has so many farms and local produce. I don't want to lock us in to doing the same menu all summer."

Asia also comes through in the day's special (and our recipe for this week) Prawn Pad Thai with Asian Slaw.

It's a pretty eclectic clientele. Customers come from the Meadows' golfing base, locals, and from the forest firebase down Airport Road.

Pierce adds the aim is to create a family-friendly place that welcomes golfers and non-golfers alike, and a children's menu aims to serve this.

"It's not just golf," says McLeod. "We have a lot of activities like jet boating right off the back here and we've got the sky divers and the soaring group across the way (at the Pemberton Airport next door), and there's horseback riding. It's an adventure here and you can do all sorts of things, food being one of them, obviously."

The Black Squirrel has also just launched its first Locals Night on June 7, which saw a full house of locals. McLeod says he would like to see it become a must-do option for every Friday night.

"Suzanne Wilson played to a packed house, and Marble Canyon is coming up on June 14. He's been playing here for years," he said.

"We've never done this before, so on Friday nights you can expect to see a lot of dinner specials out and doing creative things, but we still have our menu available. Last week, we had five specials."

McLeod believes The Black Squirrel brings something new to Pemberton, a place where people can go for good entertainment and good food.

"You go to just about anywhere else and there's no entertainment, you go for food. You can watch a hockey game, we still have that, too... or you go for a beer and entertainment and no food. So this is a nice little mix," McLeod said.

The new owners have been encouraging this way and are also music and entertainment driven, owning a recording label in Nashville. They know what it can bring to a venue.

Soak the rice noodles in boiling water for 15 minutes then drain. Heat oil in a wok. Add the prawns and stir-fry for one minute. Add the sauce ingredients, already mixed together, and stir-fry. Stir in rice noodles. Cook until well mixed. Be sure not to over heat the mixture. Cook beaten egg, break it into pieces and add to mix along with grilled cashews. Toss gently. Mix the ingredients for the slaw together separately. Serve immediately — the Pad Thai topped with Asian Slaw. Enjoy!