Anyone who has tried the collared green wrap at The Green Moustache knows it should come with a warning label: "Be careful, or you'll be coming in every day!" It's just that delicious. And nutritious.
Aug 19, 2015 6:00 PM By: Alison Taylor 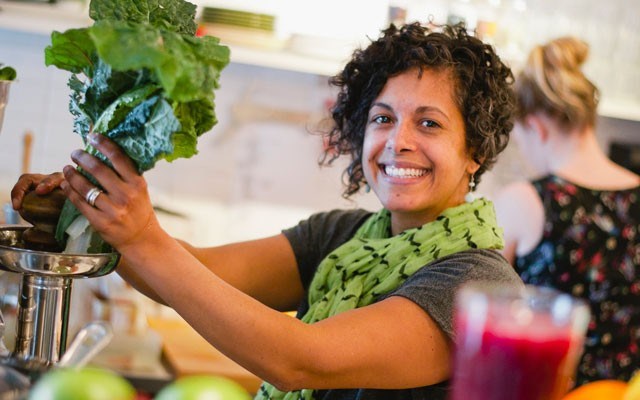 Anyone who has tried the collared green wrap at The Green Moustache knows it should come with a warning label: "Be careful, or you'll be coming in every day!"

It's just that delicious. And nutritious. And it's not the only thing on the menu that could get you hankering for a daily fix.

"I think it's the fact that we just offer clean food that's really simple but tasty and people just get it," said owner/operator Nicolette Richer, also a cancer and chronic disease consultant, of the blow-out success of the nascent organic juice and live food bar. "When they eat like this, their bodies light up."

It's been just over 18 months since Nicolette and Pierre Richer opened The Green Moustache in a small, shared space with 3 Singing Birds in Whistler Marketplace.

Within a year they had opened their second location in Vancouver and now, six months later, franchising opportunities are in the cards for some far-flung locales — New York, Salt Lake City, California. Richer still finds that hard to believe.

"When I wrote the business plan I had actually listed about 15 locations around the world that I would love to have a Green Moustache," admitted Richer.

"I put it in there to make us sound robust and like we knew what we were actually doing!"

Ironic, then, that in almost all of those 15 spots, someone has expressed interest in opening up a Green Moustache.

"I don't know if it's that power of manifesting or visioning but it's definitely working for us," she said.

The Green Moustache franchising opportunities will be released this fall.

"We want communities to be able to open up their own stores and to really have a community feel and be grown from those individual communities where they can work with the local farmers in their areas, source food locally and host workshops that are local and things like that," said Richer.

From one small local store to a budding franchise empire, the story of The Green Moustache has been a whirlwind.

"It's just been awesome," said Richer.

They say "timing is everything" and in the case of The Green Moustache, the timing was perfect. Since opening in Whistler in December 2014, dozens and dozens of vegan and plant-based juice bars and cafés have opened up in Vancouver and abroad; the industry has exploded as people become more conscious of their food choices and search for healthy options.

But what makes the Green Moustache unique is its recipes — based on medically researched therapy that Richer teaches her clients.

Take the Dr. G Ultimate Green, a cold-pressed juice, one of the most popular items on the menu. Like all the other things on the Green Moustache menu, the combination of foods is no random accident.

"We don't just throw any vegetable in there," she said. "Everything definitely has a healing component in the body and when those foods are combined, they're even more powerful."

Instead of feeling sluggish, said Richer, her customers feel alive, with a boost that's better than any pop or coffee.

"The body loves it and it starts to crave it," she said.

And that's the simple secret to their success.

The food is 100-percent organic and locally sourced as much as possible, from places like Root Down Organics and Laughing Crow Organics in Pemberton. It is the lifeblood of the place where you can have a freshly squeezed "clarity" juice with red apple and ginger that can quench your thirst before you even taste it, or a colourful superfood salad that can cheer you up just by looking at it, or a mouth-watering chocolate or orange macaroon, raw, gluten-free and dairy-free.

Richer is looking to expand their product offerings as well as expanding further into the village, perhaps collaborating with existing businesses, much like their first model.

In short: "We're looking at different ways that we can offer healthier food options in all parts of the village."

Check out The Green Moustache in Whistler at Marketplace and West 4th Ave in Vancouver next to Aphrodite's Organic Cafe.

Always use 100 per cent organic ingredients. Choose local when in season.