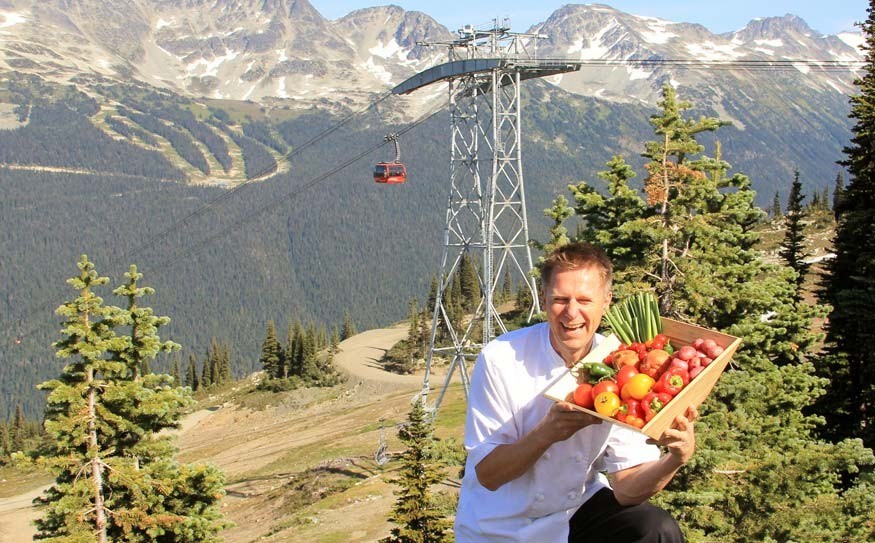 TALE TELLER Whistler Blackcomb executive chef Wolfgang Sterr has food stories and he plans to share them on Saturday at Steeps.

The afternoon heat has finally relinquished its grip on the mountains as the sun makes its final descent towards the Tantalus Range and fresh-shucked West Coast oysters find their way onto the table. A glass of See Ya Later Ranch Brut beckons beside the fresh oysters.

Winemaker dinners are a treat. Dinner at Steeps Grill & Wine Bar in the Roundhouse is also a special experience. Combine the two and the result is an unbeatable night out this weekend.

Whistler Blackcomb chef Wolfgang Sterr is promising Aug. 11 will be a special night at the top of Whistler Mountain as he invites Mason Spink of See Ya Later Ranch Winery to bring his wines to accompany a meticulously prepared dinner in the Steeps kitchen.

The menu starts with oysters and includes arancini, then tuna, a spring roll and a lamb loin dish with See Ya Later wines accompanying each dish along the way. Sterr plans to finish the meal with an Okanagan apricot tart and Spink will serve See Ya Later Ranch 2011 Hunny with the final course.

The emphasis for Sterr is on local sourcing and he says he loves talking about the dishes his team puts together. Sterr and Spink have been working together preparing for Saturday. One aspect of their preparation is assembling the stories behind each dish and wine pairing.

"Mason is a really great resource and a great public speaker," says Sterr. "It is a lot of fun teaming up with him."

Spink will talk about the wine and the philosophy of the wine along with the experiences of the wine and what people might get out of the wine. The plan is to have Sterr follow with the story of the food: where it came from, the logistics around it, what to look for in flavour and texture profiles and how the food combines with the wine.

"I try also to put a couple of environmental things in there as well," Sterr says a few days in advance of the winemaker dinner. "Eating local and the slow food movement and all that are better for the environment for a lot of different reasons, and then trying to get feedback from guests if they have questions."

Like many chefs who take pride in their work and have assembled talented kitchen teams, Sterr says he enjoys sharing stories with the people enjoying the food assembled under his watch.

"People when they think of Whistler Blackcomb, they think ski hill but they don't think that we have, actually, a very talented culinary team that is very, very involved in the food culture, and we have a great partnership with Constellation Brands (formerly Vincor)," says Sterr. "We have five or six vineyards we can choose from and See Ya Later Ranch is one of them."

Neil O'Brien, the WB catering sous chef who worked with Sterr to create the menu, says he brings his international experiences to the menu. One might think at first glance that he's from Ireland but this O'Brien was born in Australia and has been in Canada for the last 13 years.

"Its a little bit of a trip around the world," says O'Brien. "We've got some Italian, we've got some Asian influences and we're using as much local produce as we can possibly get our hands on."

He has travelled across this nation and studied food along the way so he has used his Canadian and international travels to shape the mountaintop event this weekend.

O'Brien and Sterr plan to pan-sear lamb loin for the main dish and serve it with Russian blue lyonaisse potato, garlic wilted kale and finish it with a smoked paprika aioli.

The BC SPCA will benefit from this festival of food as Sterr says the animal protection agency will get part of the proceeds from the dinner.

Finely chop the rosemary and thinly slice the garlic clove. Season the lamb loin with salt and pepper. Mix the chopped garlic and rosemary with 50 ml of canola oil, brush onto the lamb loin and marinate over night.

Blend 1 whole egg, 3 egg yolks, 1 clove of garlic, 1 tbs. of smoked paprika, pinch of salt and pepper and ¼ cup of champagne vinegar in a food processor.

Blend the ingredients until they are smooth; slowly add canola oil to the mix until it is emulsified. Check the seasoning and add salt and pepper if needed.

Heat a thick-bottomed frying pan; sear the lamb loin on both sides at high heat. Place the lamb loin in the oven for 4 minutes, flip it over to the other side and cook for 4 more minutes. Remove the lamb from the oven and let it rest.

Wash the kale and then carefully blot dry. In a medium pan sauté the sliced garlic gently. Add chicken stock and bring it to a boil. Add the kale once the stock is simmering and wilt it gently.

Arrange the potatoes on your plates and top them with the caramelized onions, continue to assemble your plate with the rested lamb loin and wilted kale. To finish the dish drizzle the smoked paprika aioli on.

EPICURIOUS: Whistler Village Craft Beer Month brings breweries to the resort
Oct 16, 2020 2:00 PM
Comments
We welcome your feedback and encourage you to share your thoughts. We ask that you be respectful of others and their points of view, refrain from personal attacks and stay on topic. To learn about our commenting policies and how we moderate, please read our Community Guidelines.