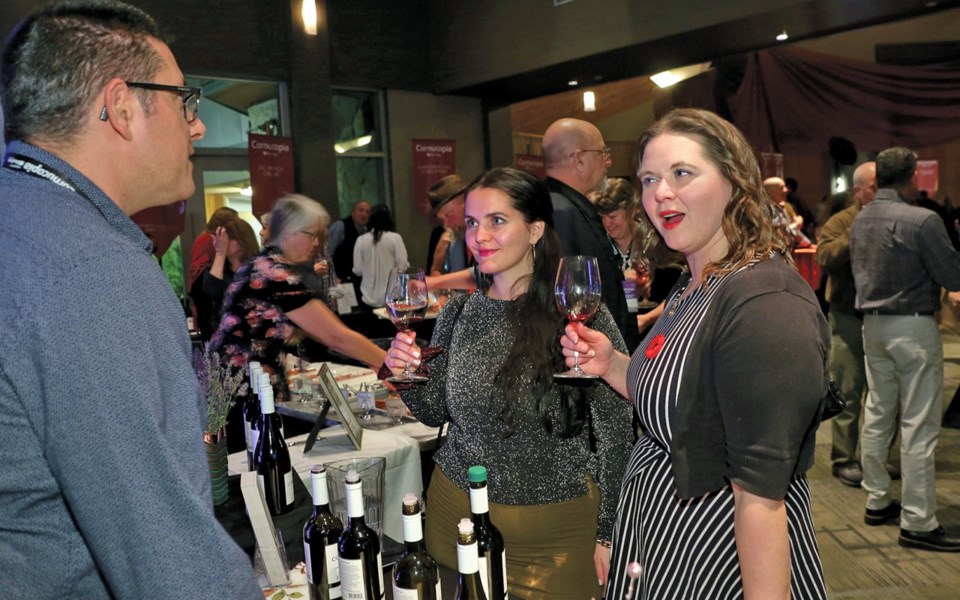 FOODIE FUROR Cornucopia, Whistler's annual food and drink festival, has been on a steady growth path for the past several years. Photo by Tannis Toohey / Courtesy of Tourism Whistler

Cornucopia, the annual food and drink festival, was envisioned as a way to shine a light on Whistler's dining scene while driving visitation during a traditionally slow time of year. With close to 10,000 tickets sold in 2019, and seats at village restaurants tough to find during the festival's 11-day run last month, it's safe to say Cornucopia is achieving its intended goal.

"I think it's something that we can be proud of as a resort," said Sue Eckersley, president of festival producer Watermark Communications. "It's doing its job: it's driving resort visits, it's profiling the amazing culinary scene that Whistler has to offer, and it's raising a great amount of money for local charities."

Eckersley attributed this year's strong ticket sales, which rose seven per cent over 2018, to the addition of a handful of new events like the drag ball and culinary competition, Sashay, Fillet!, and the second year of Abstract, which saw an Andy Warhol-themed Factory party draw more than double the number of tickets compared to last year at the Audain Art Museum-hosted event. This was in addition to continued demand for the festival's always-popular signature events, such as House Party, Crush and Night Market.

"It's actually been on a growth curve for seven, eight years now," Eckersley said of the festival. "We had a couple years where the growth was only about two per cent, but largely, we're still on a growth curve. We're pretty excited about that."

Typically a strong draw for the Lower Mainland, Eckersley said Tourism Whistler amped up its marketing in the Seattle area in the lead-up to this year's Cornucopia.

"We primarily market in areas that make sense for our title sponsor, which Washington doesn't because BlueShore doesn't have branches there. But Tourism Whistler made a real effort on our behalf with their marketing dollars to expand the market in that area, so that's great," she added.

Since its inception 24 years ago, Cornucopia has evolved into one of the resort's premier events, particularly for the relative lull of mid-November. Eckersley said the average festival guest stays in Whistler between three and four days, and isn't afraid to spend money while they're here.

"Certainly the spending from guests, from Cornucopia, has borne out in the past to be quite significant in the resort, which is evidenced as well by the average room rate for the time period of Cornucopia. That has gone up significantly over the years," she said. "I don't think anyone would dispute that it's a great economic driver for the resort, which is why Tourism Whistler built it and why it's managed the way it is."

Part of the festival's appeal lies in the diversity of programming it puts on, with events that often go beyond the norm and typically lack the pretentious air of some similar culinary festivals. Among the 115 events on offer this year, there was everything from a Spice Girls tribute band to the aforementioned Sashay, Fillet!, a silent disco and a seminar on pairing wine with junk food. "Any festival producer will tell you that if you stagnate, you won't continue to thrive," Eckersley said. "One of our goals is to make sure we're continually refreshing what is going on and also keeping our ear to the ground, figuring what other people are doing but also trying to be ahead of the trend, which I think we've done on several different factors."

With 147 volunteers, this year also marked the first time that Eckersley had to turn helping hands away. "We just had such a strong response to people coming out and volunteering and putting in so many days," she noted. The festival also raised close to $40,000 for its charitable recipient, the Whistler Public Library, which was bolstered in part by a silent auction that went online for the first time in 2019.

"We cannot thank the team at Watermark and the Friends of the Library enough for making this our most successful Cornucopia yet. It is an honour that we have been trusted with the Cornucopia brand as the charity recipient, and a wonderful opportunity to advocate for the library to locals and visitors," said library director Elizabeth Tracy in an email, adding that the funds will support the library's capital fund, "which will provide some of the furnishings and technology related to the ongoing phased space changes in the facility over the next few years."