Dining in the Dark excites the senses 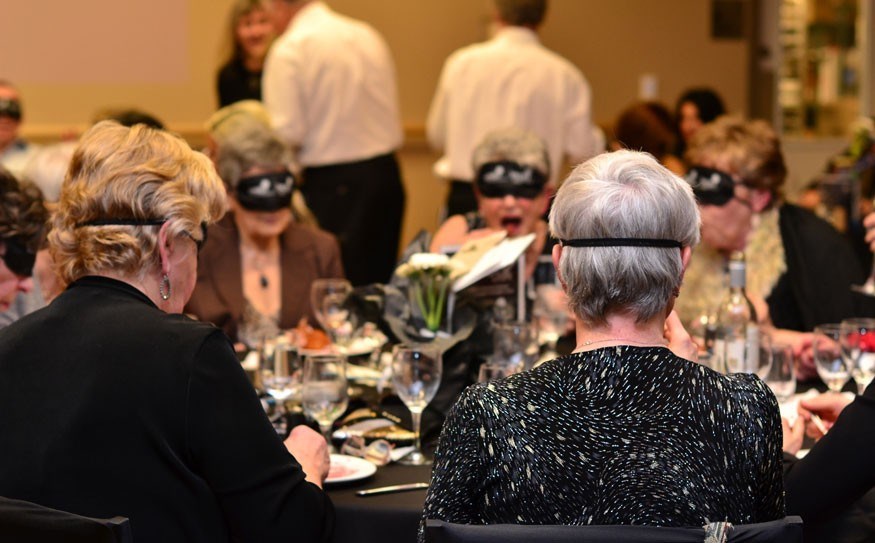 DARK DINING Hungry folk raised $6,000 for the CNIB at a blindfolded charity dinner in Squamish. Photo by Stephanie Trimble

There's something about the taste of food when it is eaten in low light. Things just taste better. Some will tell you food even smells better when the lights are dimmed.

It is hard to make out what's on the late evening dinner plate and just as hard to determine what's going onto the fork but as soon as the mystery ingredients hit the tongue there's a new surprise with each bite as all the flavours are revealed solely by taste.

Now inhale slowly, lean close to the flame and blow out that one last candle out.

Welcome to everyday dining for the blind.

Also known as business as usual at Dark Table Restaurant on West 4th Avenue in the Kitsilano area of Vancouver.

On Saturday, Feb. 16, diners at the Seniors' Centre in Squamish enjoyed five-course meals prepared by chef Gregg van Heirden from the Clock Tower Café. Event organizer Dave Thomson with the Canadian Institute of the Blind ensured the dining experience was a dark one.

"Some of the lights in the Squamish Seniors' Centre don't turn off," laughs Thomson as he recaps the events of the night.

The first hour was spent mingling and enjoying the first course of appetizers fully sighted while music played and attendees placed bids on the auction items.

Thomson says everyone put on blindfolds for the next four courses of food. Guests got to take their blindfolds off in between courses so they could write down what they thought they had just eaten.

Lydia Liao of Vancouver and her boyfriend were two of the people who put on blindfolds. She saw a listing for the event in Pique and decided to attend.

"It was really interesting to put on blindfolds and to try and figure out what you have on your plate, and what utensils to use to eat what's on your plate," Liao says. "I realized in the first course I had my blindfold on that I relied tremendously on my sense of touch."

She and her guest bought an auction item, a gift basket with a certificate in it for a one-night stay at the Marriot in Vancouver and passes to the Museum of Anthropology and the Maritime Museum.

"The Museum of Anthropology was where my boyfriend and I had our first date," she says. "We were both UBC students at the time."

Liao says she had such a good time she intends to eat at the event again next year.

"It was delicious and cooked to perfection, especially the duck! I really loved the dessert," says Liao. "Being blindfolded really does heighten your other senses, especially your sense of taste. It allowed you to appreciate and to experience subtle features like texture of the food in your meal."

This was the second annual Dining in the Dark event in Squamish and Thomson says it attracted 110 people compared to 48 last year. The $6,000 raised will benefit the 60 blind people who live in the Sea to Sky area.