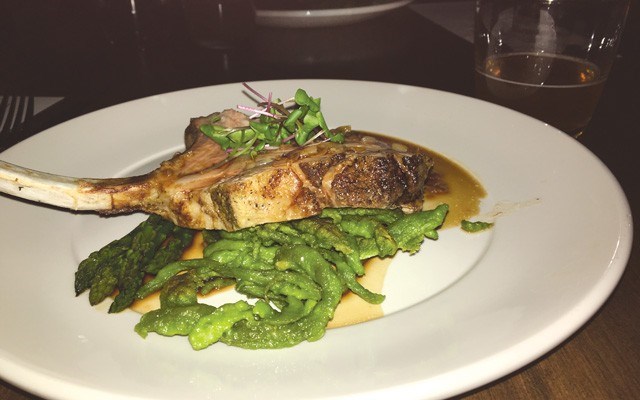 Brewmaster dinner Aura Restaurant chefs have teamed up with brewmasters to create a new way to enjoy hops, and more. PHOTO by dan falloon

Chef Dean Hossack knows from experience how imposing wine, at times, can be.

The Aura Restaurant executive chef has helped create winemaker dinners at the Nita Lake Lodge eatery the past two summers, and acknowledges it can be difficult to pick up the subtleties of some wines.

In recent years, Aura has teamed up to create brewmaster dinners as well as part of its Sip & Savour, including one April 7 with Deep Cove Brewers and Distillers' Brett Jamieson. Planning a meal around beers can be more accessible to more people, Hossack explained.

"When the winemakers talk about their hints of this and notes of that, you kind of wonder if you can taste it, but with the beer, you can immediately taste it," Hossack said before the dinner.

Hossack and Jamieson planned the dinner over the course of the past few months, making slight tweaks to the menu in the process.

The beer-centred evenings allow Hossack the chance to experiment with bolder, earthier flavours in his cooking, including making pork the star attraction, which can be challenging to do with wines.

Of most interest to Jamieson was Hossack's decision to implement hops and malts from the Scout Rye IPA into his roast pork loin marinade, giving the meat a tropical, fruity flavour to match the beer.

"The biggest (decision) was the inclusion of hops in some of the courses," Jamieson said. "(It) was the biggest one to accentuate what was in the beer already.

"I've done a few beer-tasting dinners and this is the first time that actual beer ingredients have been used in some of the courses, so it's really interesting and I'm excited for those courses especially."

Hossack noted he had taken a small amount of the hops three days before the dinner to use, and was pleased with the result of the hops' inclusion.

"It mellows out the flavours and creates a really delicious mouth-feel and taste," he said.

While it's possible to create a tantalizing experience with clashing flavours, Jamieson said a smoother transition of tastes has a higher chance of success.

"They very much line up with each other," Jamieson, a certified cicerone, said of the meal's flavours. "There's a couple ways that you can pair beer with food and these ones are very much complementary, which is always the better way to go. When you go the other way and try to make it so they're fighting each other, it's a little harder to make it work. Always going the complementary route is a really great way, especially if you're using ingredients like that where they are in both."

Additionally, the Coffee Common beer blend, which was a collaboration between Deep Cove and Gibsons' Persephone Brewing, was paired with the chocolate pot du crème dessert, which featured an espresso Chantilly foam. The Coffee Common was brewed in the California common (or steam beer) style popularized by San Francisco brewery Anchor Steam, giving drinkers a lighter coffee option than the typical stouts.

The blend made its debut at the dinner, as Jamieson noted he poured it into growlers that morning to be served in the evening.

The meal began with a cocktail of tonic water and Deep Cove gin, which was refreshingly infused with rosemary and olive flavours.

The first beer offering packed a punch as well, as the Noel Belgian strong ale clocked in at 8.5 per cent, but when paired with a hearty salad of baby kale and mustard greens, pickled green beans, bacon vinaigrette and a poached egg, it was not at all overpowering.The second course featured a rich and creamy leek and potato chowder with salmon with the flavour of a pleasantly lingering campfire joined with The Crawl stout, named for a Spirit of the West ditty.

Even with summer starting to emerge, Jamieson is already looking ahead to fall, as he's planning a harvest beer with roasted B.C. squash included in the mash.With brewers getting more and more creative with their beer ingredients all the time, Jamieson expects the brewers will continue to push boundaries — for better or for worse.

"What'll probably happen is all the extremes will be explored and people will realize you don't need to go that far to make a beer interesting. It'll come way more towards balance and I think that's going to be really important," Jamieson said. "Some of the best beers I've ever had are craft beers, but some of the worst beers I've ever had were craft beers as well. It's a really fun time to be a part of the brewing scene. There's a lot of experimentation going on."

The next Sip & Savour dinner is June 30 at Aura Restaurant and will feature Belgium beer brewers. Tickets are $59 per person.