Embracing the dandy dandelion and other spring pop-ups 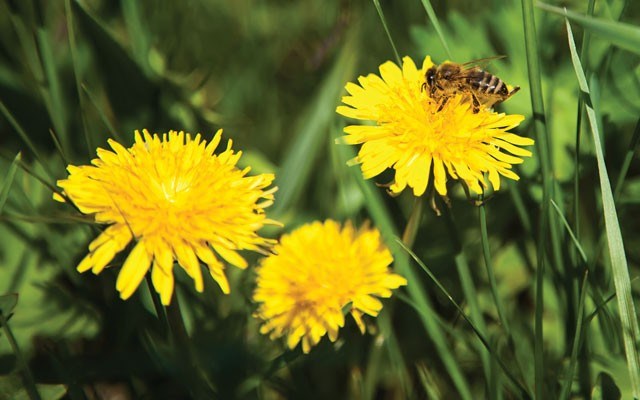 Spring has sprung. The grass — along with so many other amazing plants — is riz. I wonder where them birdies is.

With the recent unseasonable heat pushing up plants earlier and faster than normal, you sure don't have to wonder about the birds or the plants of this old singsong adage. Some horticulturalists are saying spring flowers are anywhere from three to four weeks ahead of schedule this spring, depending on the species. And we're barely into the middle of April.

Scientists and meteorologists point to climate change along with the more specific impacts of this year's El Nino as the root of the recent heat wave (59 records were shattered across the province over March 30 and 31 alone). But beyond the science of it all, the early warmth means blooms and emergent leaves are bigger and fuller than ever for the time of year, including in nature "where the wild things are" (apologies to Maurice Sendak).

Our coastal mountain area offers amazing wild bounty — yours just for the picking, as long as you know what you're doing. Common sense is the rule, so if you don't know the ins and outs of wild plants then make a point to educate yourself. You'll need to know their appearance for positive identification; their habitat and its sensitivities; and how to pick or harvest each to make sure you're doing so sustainably or even legally. Some wild plants do have harvesting restrictions, but they usually only apply to large quantities or commercial operations.

Learn from someone knowledgeable and supplement that with a good, reliable reference, like Jim Pojar's and Andy MacKinnon's Plants of Coastal British Columbia. The Whistler Naturalists Society is an excellent resource for learning about local wild plants and much more. If you really want to get into it on the enviro side, the provincial Ministry of the Environment posts useful conservation information on some 600 B.C. ecosystems and 7,400 plant and animal species, including those at risk.

To start, you really can't miss with dandelions. Their cheerful yellow faces are popping up everywhere right now. But even though dandelions are so ubiquitous in North America and used by some First Nations people as food, they really are native to the Old World, arriving as imports via early sailing ships.

Another nice thing about dandelions is you can eat every part of the plant. Not only are the tender new leaves a good veggie hot or cold, according to Pojar and Mackinnon you can also cook the roots and eat them as a hot vegetable, or dry and grind them for a coffee substitute. The flowers have long been popular for making dandelion wine, and — craft breweries take note — the entire plant can be brewed to make beer. Coupled with burdock, which grows wild here as well, dandelion also makes for a popular soft drink in the U.K.

If you have kids, a wild beauty like the dandelion is a natural for getting them interested in connecting with nature and the idea that once upon a time all our food came from nature, not a grocery store shelf. Not to be alarmist, but remember to caution youngsters about natural food plants and the common sense avoidance of possible undesirables, such as herbicides or contaminants from traffic if the plants are growing along busy roadsides.

I've just picked some fresh, tender dandelion greens from my pots of garlic and onion chives. Of course, the dandelion interlopers aren't supposed to be there, but each year I say, what the heck, their flowers are a pleasure and the greens are delicious in salads and soups. Besides, I can't dig out those huge, intransigent taproots since they're intertwined with the chives. So the beautiful rosettes of leaves pop out again and again, year after year, just as they do on commercial farms in Eurasia where, believe it or not, dandelions are a cultivated crop.

Dandelion leaves can be a bit bitter; some say they're close to mustard greens in taste. Actually, that's the very reason I use them. They add a nice piquant note, although some people also value them for their tonic and diuretic properties. If the leaves are older and/or you want to temper the bitterness, you can blanche them before using them. If you choose to grow them yourself in your garden as they often do in Europe, planting them in shady areas will do the same.

But don't stop at dandelions. Chicory will soon be up, another common Eurasian weed that spread throughout North America, especially with the early trappers and railway workers. They planted it for its roots, which, like dandelions', were dried and roasted as a coffee substitute — popular in Europe but, again, not so much here.

Likewise nettles, another Old World import known for their tonic properties and used in salads, pastas, pestos, delicious soups and more, especially when the leaves are young and tender. (Just Google around for recipes — you'll be amazed.) B.C. has two varieties: stinging nettle and dog nettle. Most Canadians fear nettles, never mind eating them, but food scientist Harold McGee assures us that a quick blanche "disarms" the sting. However, you will need protective gloves to harvest and wash them.

So gloves or not, get out there and see what you can find this spring. Just remember that one person's weed can be another's flower — or food source.

Glenda Bartosh is an award-winning journalist who wonders who decided which plants were weeds, and which weren't.